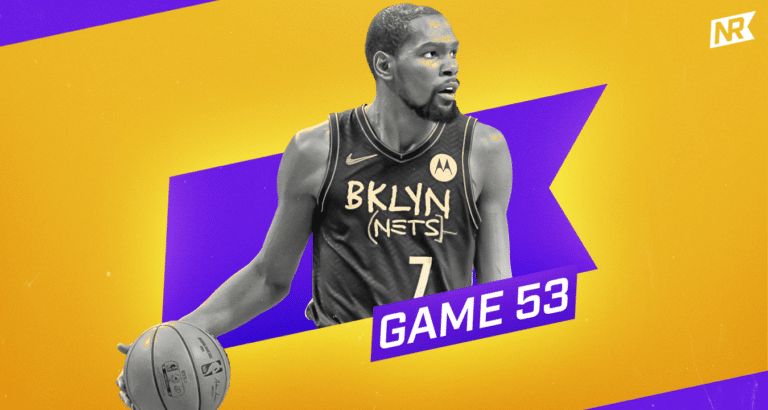 In their last game on national television for the regular season, the Brooklyn Nets lost in a 126-101 blowout to an extremely depleted Los Angeles Lakers squad. Between Kyrie Irving’s questionable ejection early in the third quarter and Kevin Durant’s minutes restriction, Brooklyn completely folded in the second half after coming back from a slow start in the first half.

Games like these are absolutely unbearable. This is a contest that, considering the active rosters for each team, the Nets should have — emphasis on should — won fairly handily. Instead, we’re left analyzing a game characterized by befuddling calls that altered the nature of the competition, end-of-the-bench players performing as would be expected, and a lack of energy that was synonymous with the game’s tone as a whole.

With this loss, there’s not a ton to take away for the Nets specifically. But there are undoubtedly conclusions that should be straight-up disregarded.

As such, here are three takeaways from Saturday’s loss to the Lakers.

There’s really not much else to say about this game in particular. From the first minutes alone, something was undoubtedly off with the Nets, as they lacked the necessary energy to play a complete game. Maybe they underestimated or shrugged off the Lakers without LeBron James, Anthony Davis, and a handful of role players, or maybe it just wasn’t Brooklyn’s night.

Either way, the Nets never truly recovered from their lackluster first quarter. Really, the only guy keeping Brooklyn in the game was Kyrie Irving, who put up 18 points in his 21 minutes. He scored in a variety of ways as he carried Brooklyn for most of the first half.

Yet, as things tend to for Brooklyn this season, that good thing came to a quick end when Irving and Los Angeles’ Dennis Schröder were both ejected from the game not even four minutes into the third quarter after refusing to quit jawing at each other.

The decision from the referees was what it was. But as Irving left the floor, any shot Brooklyn had at pulling out the victory did as well. Kevin Durant was fantastic considering this was just his second game back after a near-two-month absence. But his minutes restriction meant that even his 22 points, seven rebounds, and five assists were far from enough to keep up with an L.A. team that rode Andre Drummond to victory.

Just the fact that Brooklyn continues to lose out on opportunities for its star players to play minutes together is a shame. The injury bug has hit them hard all season long and so have nights like these that, from a perspective less familiar with the Nets’ luck, would characterize them as a series of unfortunate events.

This performance isn’t worth overreaction

With all that in mind, this game is by no means worth allocating much energy towards analysis or large-scale takeaways. It was what it was and anybody who says differently is alternatively motivated.

Undoubtedly, the Monday morning talk shows are going to have an absolute field day with this game. Headlines like “Depleted L.A. Roster Demolishes Nets, Led By Durant and Irving,” will be beyond prevalent in the national media in short order. Yet, despite all the hoopla and clickbait, this game really doesn’t mean much at all.

If there is anything to truly take away from this game, it’s that the Nets need to come out of the gates a bit faster — as if that hasn’t already been obvious this season.

Can we fast forward to July, please?

Had Brooklyn and Los Angeles both been fully healthy for this game, it undoubtedly would have been one of the most anticipated, most viewed, and most analyzed contests of the 2020-21 regular season. Unfortunately, we were robbed of such by the laundry list of injuries each squad is dealing with.

As this is the second and final contest between the Nets and Lakers in the regular season, the lone remaining opportunity for them to meet is in the NBA Finals. As likely the two most talented teams in the NBA, with a bevy of stars between them, such a matchup would be mouthwatering on the league’s biggest stage.

Right now though, there’s yet to be a game between these two with both squads at full strength, and that’s a shame. But if they meet again in the Finals, then NBA fans, Nets fans, and Lakers fans everywhere will be better off for it.