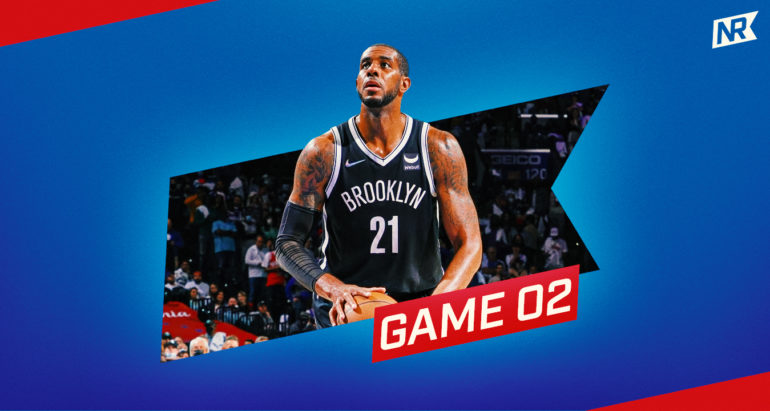 After a clunker of a game in the season-opener, the Nets found themselves staring at another daunting opponent in the Philadelphia 76ers. And for the majority of the game, it almost felt like Déjà vu from Tuesday. Ironically the Nets’ first basket of the game came on a Harden to Claxton alley-oop just like their last game. But, Brooklyn started out the game slow once again as the Sixers began the game on a 20-6 run. The Nets led by Kevin Durant again mounted a mini-run and were down six at the end of the first quarter.

For much of the second and third quarters, the game was back and forth. Every time it looked as if the Nets were ready to make a true run, there was Joel Embiid and the Sixers with an answer. It wasn’t until the fourth quarter where Brooklyn finally woke up. After a Tyrese Maxey alley-oop slam off a Joe Harris turnover, the Sixers went up 108-98 with just under six minutes left in the game. Steve Nash would call a timeout and the rest was history.

The Nets locked down on the defensive end and LaMarcus Aldridge turned back the clock. Brooklyn ended the game on a 16-1 run which was capped off by LaMarcus Aldridge’s go-ahead dunk with just under one minute left off a sweet dime from James Harden. After a few last-second free throws the Nets escaped Philly with a much-needed early-season win.

LMA still has some gas in the tank

After a shaky season-opener, LaMarcus made his presence felt early against the Sixers. In his six first-half minutes, Aldridge tallied 8 points and was a +5 plus/minus. He had a stretch where he hit three straight mid-range jumpers from just about the same spot near the free-throw line. The fourth quarter is where LMA really shined. He poured in 11 of his 23 points in the final frame and was one of the catalysts down the stretch.

Overall, LaMarcus just looked 5 years younger. Certainly, far from washed. He had a nice dunk working in the two-man PnR game with Jevon Carter. A little bit later he hit a turnaround baseline fade on Andre Drummond which looked like peak LMA. Although the stats don’t show it, he was also a force on the inside keeping plays alive and collecting a key offensive putback off a Durant miss late in the fourth.

In his short tenure with Brooklyn, this was easily his best performance and it couldn’t have come at a better time. With Nic Claxton having a slow start to the season, Aldridge appears to be gunning for that starting spot.

One of the noticeable things about the Nets this season is the plethora of veteran players on the team. Aside from the return of Aldridge, the Nets added proven veteran talents such as Patty Mills and Paul Millsap for games such as this one. Mills continued his hot shooting from deep as he connected on all three of his long balls. He is now a perfect 10-10 from beyond the arc. But Patty didn’t just contribute with his shooting. He was a pest on defense all night and had a crafty transition layup during the Nets 16-1 run to cut the Sixer lead to two with just under two minutes left.

It was also a quality night for Paul Millsap. After only playing five minutes in the opener, Millsap gave the Nets 17 strong minutes off the bench. He ended with seven points and grabbed down four boards. As Steve Nash continues to tinker with different lineups, the “old guard” of Mills, Aldridge, and Millsap have shown they are still viable soldiers to be relied on when called upon.

Well, it hasn’t been the most joyous of times for the Nic Claxton stans. For the second straight game, Claxton got the start and for the second straight game, he looked completely overmatched. Granted his first two matchups on the season were against Giannis and Embiid, but he has looked like a deer in headlights regardless of who is matched up against him. The glaring weakness in Claxton’s game rn is his strength. He was blocked twice in the first half and had a costly turnover early in the 3rd quarter in which he looked hesitant to go up strong.

With the performances from LMA and Millsap Friday night against the Sixers, Claxton’s starting spot may soon be in jeopardy. It’s still early, but soon the questions surrounding Claxton and his ability to be a contributor in the main rotation will start to emerge.

Next up: Nets return to Brooklyn for their home-opener against the Hornets (Sunday, 4:00 PM ET)