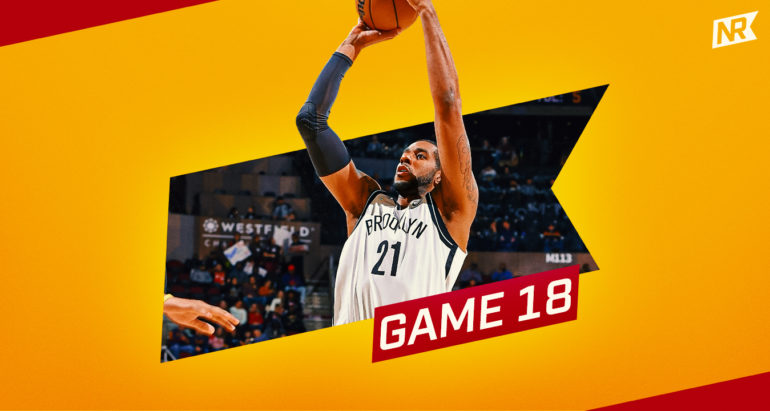 Well, it wasn’t pretty by any stretch of the word, but a win is a win. The Brooklyn Nets used a strong second half to overcome an 11-point halftime deficit to defeat the Cleveland Cavaliers. Kevin Durant led the way for Brooklyn, pouring in a team-high 27 points while dishing out nine dimes. Speaking of dishing out dimes, James Harden handed out 14 helpers, paired with a modest 14 points. Former Spurs Patty Mills and LaMarcus Aldridge provided some much-needed secondary scoring for the Nets, dropping 21 and 17, respectively.

Despite former Net Jarrett Allen (20 points, 15 rebounds) and Darius Garland (24 points, 11 assists) giving Brooklyn fits all night, the Nets were able to rally the troops and hang on for the win.

Finally, the wishes of Nets fans everywhere have been granted. After a brief glimpse of some non-garbage time minutes over the past few games, fans were gifted with some earlier first-quarter Cam Thomas minutes. Deemed as “not ready” by some, the rookie proved he is fully prepared for the big stage. Fresh off a 46-point performance on Saturday for the Long Island Nets, Thomas entered the game and immediately made an impact. He caught himself a block on Ricky Rubio as the vet tried to pass him baseline. A few plays later, Thomas hit a transition three (the first of his career), which pulled the Nets bench to their feet.

The second half is really where Cam Thomas made his presence felt. After checking into the game around the midway point of the third, Thomas was one of the catalysts behind Brooklyn’s 20-6 run to end the quarter. The rookie would connect on a corner three and then, a few plays later, convert an and-one layup in transition. Thomas would cap off his eight-point quarter with a short pull-up jumper from the baseline after getting Rubio in the air off a pump fake. Thomas didn’t see the floor down the stretch of the game, but his impact was a big reason why Brooklyn was victorious. He finished with 11 points on four-of-seven shooting, including a pair of threes, in 15 minutes of court time.

Now, by no means did Cam play a perfect game. There were still some lapses on the defensive end which can get cleaned up over time with more reps. However, this was a very impressive showing from the rookie. With Jevon Carter struggling on the offensive end this season it will be interesting to see if this is a springboard for Thomas to get more minutes in the rotation.

The Curious Case of Brooklyn’s frontcourt

The Nets’ frontcourt situation has been one that has been a Rubix cube to figure out all season. The only thing we know for certain is that Aldridge is the only consistently positive big the Nets have. This isn’t meant to shade Paul Millsap; it’s just that we haven’t been able to get a good gauge on him because of his sparse playing time. With the absence of Nic Claxton over the past few weeks, Brooklyn has relied on Blake Griffin and, recently, James Johnson. And it appears both players are currently trending in opposite directions.

For the early stages of the season, James Johnson was a net-negative while on the floor. It was vastly apparent his conditioning wasn’t there, and, at times, he appeared lost on the floor. However, he has really come on over his last few games and has played a key role in Brooklyn’s last three victories. While it wasn’t the best of shooting nights for Johnson (4-13) he did come up huge down the stretch with a crucial corner three and an uncontested layup which all but sealed the game for Brooklyn. Johnson’s ability to stretch the floor from deep has been pivotal to the Nets offense lately, not to mention the physicality he brings on the defensive end. Although it’s a small sample size, Johnson’s stock is definitely trending upward.

And with Johnson’s stock going up, Griffin’s stock is trending down. Although he’s the leader of the Blue Collar Boys, Griffin has had a rough go as of late and Monday was no exception. Griffin saw only nine minutes of game action, which all came in the first half. During that time, Griffin was just outworked and outclassed by Cleveland’s Allen and Lauri Markkanen. Brooklyn was dominated on the boards in the first half to the tune of 30-14. Aldridge wound up starting the second half for Brooklyn as Griffin watched from the bench.

Compared to last season, Blake has looked like a shell of himself. It’s especially obvious on the offensive end, where he simply cannot buy a basket from long range. Even on the inside as a roller, Blake isn’t converting at the reliable clip you’d expect. With an inability to spread the floor or finish on the inside, Blake is becoming a space waster for the Nets on offense. Defensively, the drawn charges are nice, but if that’s the only thing his hard-hat mentality will consist of, Steve Nash may look to divvy up his minutes elsewhere.

Next up: Brooklyn travels to Boston for a matchup with the Celtics (Wednesday, 7:30 PM)