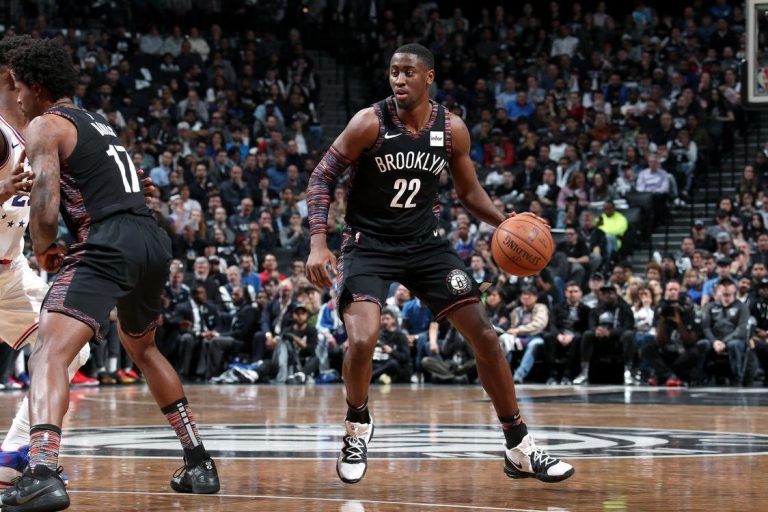 BROOKLYN, NY - APRIL 18: Caris LeVert #22 of the Brooklyn Nets handles the ball against the Philadelphia 76ers during Game Three of Round One of the 2019 NBA Playoffs on April 18, 2019 at the Barclays Center in Brooklyn, New York. NOTE TO USER: User expressly acknowledges and agrees that, by downloading and/or using this photograph, user is consenting to the terms and conditions of the Getty Images License Agreement. Mandatory Copyright Notice: Copyright 2019 NBAE (Photo by Nathaniel S. Butler/NBAE via Getty Images)
Home
Brooklyn Nets
Gotham's Reckoning

The Nets suffered a disheartening loss at home on Thursday as the 76ers took a 2-1 lead in their first round series. Brooklyn got off to a fast start, capping off a 9-4 start with a Jarrett Allen dunk that forced a 76ers timeout. Philadelphia came back strong, taking an 18-17 lead with a Boban Marjanovic dunk with 6:41 left in the first quarter.  The 76ers never trailed again on their way to a 131-115 victory, taking the lead in the series despite Joel Embiid missing Game 3 with left knee soreness. Let’s review three things I liked, three things I didn’t like, and three things to look for in game four.

Caris LeVert may have had actual flames shooting from his fingers at one point in the second quarter. After starting 0-for-3 from beyond the arc in the first quarter, he scored 14 Nets points in a row to start the second quarter, tying the game at 38-38 at the 8:36 mark. He utilized both his herky-jerky drive game as well as jump shot, and finished the quarter with 19 points.

Caris LeVert was ballin' in the 2Q as he leads all scorers with 19 PTS! 🔥#WeGoHard | #NBAPlayoffs pic.twitter.com/UNYgQ2dzQi

LeVert finished with 26 points (tied for the team high with Russell) on 10-for-17 shooting, including 3-for-8 from 3. He also filled up the box score with seven rebounds, two assists, a block, and two steals. LeVert is now shooting 8-for-15 from three on the series (53%), an encouraging sign after shooting 31% in the regular season.

Allen looked a bit more aggressive from the start, possibly due to facing Greg Monroe instead of the more imposing Embiid.

In his best game of the series Allen scored 15 points on 4-for-5 shooting (7-for-9 from the line), and grabbed six rebounds including three offensive boards. Ed Davis was limited to 10 minutes after tweaking his injured ankle in the second quarter. If Davis is not in playing shape by Saturday, the Nets will need Allen to continue to step up.

The Nets attacked Monroe right from the start in the pick and roll. Monroe played 25 minutes and finished -9, the only negative plus-minus player for Philadelphia. He did crash the boards, grabbing 13 rebounds including 6 offensive, but did not convert his opportunities as he shot 4-for-13 from the floor. Greg Monroe taking as many shots as Ben Simmons and Jimmy Butler is probably not what Brett Brown had in mind, but the Nets will not complain.

Joe Harris is struggling to get looks against a 76ers defense that has clearly made him a priority. He is 0-for-6 from 3 in the last two games and a whopping -65 in 85 minutes over the series, the worst mark on the team. Philadelphia is targeting him on defense, and it may be best to see a little less Joe Harris the remainder of the series.

In response to the back-and-forth between Simmons and Jared Dudley before the game, Simmons showed up in a big way.

And Simmons is just the second Sixer ever to score more than 30 points and shoot over 80% from the floor.
The other is… Wilt Chamberlain

Simmons looked unstoppable at times and looks to be gaining a better feel for how to attack the Nets defense each game of the series. Round 1 of the Simmons-Dudley blood feud goes to the Aussie.

I am not a fan of flopping in general, but knowing how to sell contact is an effective tool for an offensive player. This…is not how.

Butler did this again in the fourth against LeVert with (slightly) more contact and got to the line. There is a difference between exhibiting the effect of contact and looking like you are being dragged away by an invisible demon in a cheap horror film.

Three Things To Look For in Game Four

When Marjanovic fouled out with seven minutes left in the fourth quarter, Philadelphia chose to go “small” with Mike Scott with a nine point lead. Greg Monroe returned at the 1:53 mark, after the 76ers had stretched their lead from to 16 at 127-111. Philadelphia has significant size advantage, with Simmons nearly matching the size of Jarrett Allen himself, so their small-ball lineup is not comparable to the Nets version of the small lineup. If Embiid is still out, or severely limited in game four, it might make sense for the 76ers to give more minutes to non-Boban, non-Monroe lineups.

Davis was limited to five minutes in Game 2, and 10 minutes in Game 3 due to a right ankle injury. Davis may be the Nets most important player. Per Cleaning the Glass, he has the best on/off scoring differential on the team, with the Nets 5.5 points per 100 possessions better with Davis on the floor. If Embiid is back in game four, the Nets will need Davis available to at least throw another body at him to keep Brooklyn in the game.

The Nets hung around in the game despite shooting only 8-for-39 from 3 (20.5%). Russell shot 2-for-9 from 3 (and 12-for-26 overall with no free throw attempts). Brooklyn lost all seven games in which they shot less than 25% from 3 in the regular season. The Net trend with their outside shooting, and when the bottom falls out things can get ugly. Strong ball movement and knocking down their open looks from deep will always be a key factor for Brooklyn, especially in the playoffs against a team with as much talent as Philadelphia.