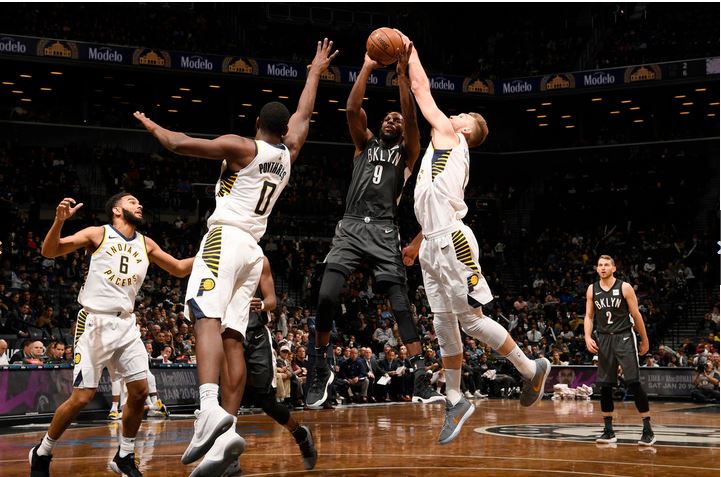 In what is essentially a dead rubber season, the Brooklyn Nets must continue to improve the roster or acquire pieces for the future.

While the Nets have very little in terms of valuable trade assets, one player that will garner attention on the open market is non other than DeMarre Carroll.

At 15-23, some may say the Brooklyn Nets have over achieved this season. With marquee wins against elite teams such as the Cleveland Cavaliers, Washington Wizards and the Minnesota Timberwolves, the Nets have shown they can compete with the big boys. However, inconsistent play has often undone the good work and positive signs one night seem like fools gold the next.

One player who has performed particularly well is DeMarre Carroll. After an ugly exit from the Toronto Raptors, Carroll has bounced back to record career highs in points (12.4), rebounds (6.7) and assists (1.8) per game. While he has shot an inefficient 39.3 percent from the field and a subpar 33.5 percent from three, the 31 year old small forward continues to be a solid perimeter defender. His three and D skillset will appeal to fringe playoff teams short on wings, thus the correct next step is to at the very least, try to acquire a 2018 first round pick for his services.

Lets take a look at three teams who may be interested in his services.

After a hot start to the 2017-18 NBA season, the Indiana Pacers have cooled off. An injury to star guard Victor Oladipo combined with a porous defense has seen the Pacers drop five straight games. With a 19-19 record, Indy only sit half a game ahead of the 76ers for the eighth spot. If Indiana intend on going to the playoffs, they need to make roster adjustments to truly compete.

One huge area of need is at small forward. As currently constructed, the Pacers are playing Serbian Bojan Bogdanovic as their starting three. Bogdanovic is an offensive minded, three-point specialist, experiencing career highs in points per game (13.8) and field goal percentage (47.7) this season. A 38.8 percent three-point shooter this season, Indy primarily use him as a spot-up shooter. With Nate McMillan implementing a live by the three, die by the three offense, he has excelled on the offensive side of the ball this year.

However, his contributions on defense are virtually non-existant. The Pacers sit 24th in the league defensive efficiency (1.071), 23rd in points allowed (107.4) and 25th in defending the three-point line (31.6). While Carroll isn’t the shooter Bojan is, he is a strong perimeter defender. He has been a plus defender his whole career (defensive plus-minus of 0.4) and is known to take on opposing teams toughest assignments. Although Carroll is shooting five points worse from range, he is a solid three and D that fills a gaping need for Indiana.

Unlike the Indiana Pacers, Denver has a league average defensive rating. The Nuggs sit 17th in defensive efficiency (1.056), 15th in point per game (105.9) and 18th in defending the three-point line (30.2). Adding Carroll will surely up Denver’s defense and provide another veteran presence to guide its young core.

Denver has one small forward in Wilson Chandler but he’s been on the trading block for an age. He is a do-it-all forward but has largely been misused in a disorganised system. Carroll is a better defender and a more reliable option from range. Denver also need another veteran presence, something Carroll offers a young core looking to make some noise in the future.

If there is one roster in the league full of overpaid players, it’s the Portland Trail Blazers. Approximately $98 million is committed to five players over the next three seasons/ Additionally, Jusuf Nurkic is due a substantial raise. The Blazers have virtually no wiggle room to improve its roster. Portland’s front office is on the clock to assemble a solid supporting cast.

One player they will be looking to offload is Evan Turner.

Turner’s four year, 70-million-dollar contract was one of the biggest overpays the NBA has seen. Fast forward one year and the Blazers can’t get rid of him. Due $54M over the next three seasons, Turner is producing a measly 8.4 points and 3.7 rebounds in 27 minutes of action. A gifted passer and solid defender, Turner struggles to shoot the three and relies heavily on an outdated mid-range game. With league predicated on space and pace, Turner’s skill set simply doesn’t fit on teams not named the San Antonio Spurs.

Portland sit fourth in defensive efficiency (1.014) and fourth in points allowed (101.6). But, their 22nd ranked offense (102.7) needs work. Carroll may not inject a tonne of points. Yet, his ability to shoot from range opens the lanes for stars Damian Lillard and C.J McCollum. His three and D game means Portland loses nothing on defense but gains more on offense. Carroll is on the books for two season’s as opposed to Turner’s three thus they will be saving money in the process.

Don’t get me wrong – his contract is atrocious. However, if General Manager Sean Marks is able to snare at least two first round picks, it must be considered.