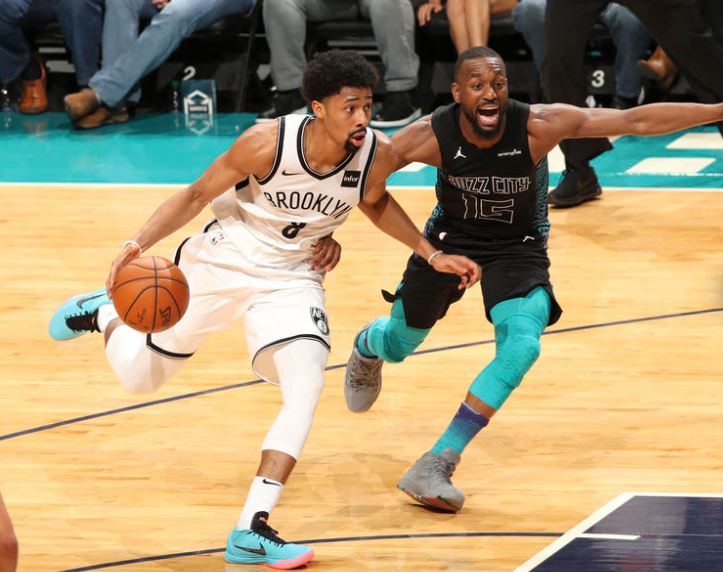 The Brooklyn Nets began the post-All-Star-Game stretch with a whimpering 111-96 defeat to the hosting Charlotte Hornets. For the second time all season, the starting backcourt for the Brooklyn Nets was Spencer Dinwiddie and D’Angelo Russell. Unfortunately, the tandem that tantalized Nets fans did not lead to victory in this go-around. The defeat denounces the Nets to a fate of an eight game losing streak.

It is safe to assume few would have pegged Dante Cunningham to ever lead the Nets in scoring for a single game this season. Even fewer would have predicted a 20/10 game from the 30 year old veteran. Such is the beauty of the NBA.

Dante Cunningham had his first 20 point game in five years in his fourth game as a Brooklyn Net. In 27 bench minutes, Cunningham accrued 22 points off 8 of 12 shooting from the field, adding 12 rebounds, and even four assists. Most impressively, the 32.3% career three point shooter shot 4 of 7 from beyond the arc.

On a night where Brooklyn shot 38.7% from the field and 32.6% from three, the Nets needed every spot up jumper, savvy duck-in under the rim, rugged rebound, and heady pass Cunningham had in his arsenal to prevent the game from being a laugher of a blowout before the 4th quarter. Cunningham even gamely defended Dwight Howard in the low post! Salute to a career night.

With Dwight Howard snatching an easy 24 rebounds, the Brooklyn Nets during this eight game losing skid have now allowed five opposing centers to grab at least 15 rebounds in a game. Myles Turner just missed out on making it a half dozen with a measly 14 rebounds during the Pacers’ Valentine’s Day victory.

So what gives? For all the flashes of modern bigman skill Jarrett Allen has had in the past month as a starter, defensive rebounding has not been a strong suit of his. For the entire season, opponents rebound 25.3% of their misses when Jarrett Allen is on the floor. That rate would comfortably sit in the top five of the league for team OREB%.

Allen’s personal defensive rebound rate of 18.4% ranks 43rd out of 57 qualified players who have played at least 20% of their minutes at center (via Basketball-Reference’s play-by-play data). Despite his Reed Richards arms, the rookie simply lacks the girth to keep most big men out of the paint on box-outs or putbacks.

Now, the poor rebounding blame should not solely fall on Allen. Coach Atkinson has elected to use Quincy Acy often as a nominal center after Tyler Zeller got traded away. The 6’7”, 230 lb. Quincy Acy cannot bang at all against traditional centers, no matter how rough-and-tumble his beard makes him look.

Jahlil Okafor did not play against the Hornets but had not been much better than Allen on the defensive glass. Even more egregious, Okafor provided next to zero threat on the offensive glass despite remaining a porous transition defender.

Finally, the wings in the Brooklyn rotation have wavered from their solid effort crashing the defensive glass from the perimeter. Perhaps, the reinsertion of D’Angelo Russell into the rotation influences that regression. D’Lo is not one to box out consistently or nab any rebounds outside of his 6’10” wingspan. But furthermore, D’Lo’s presence encourages a higher emphasis on running in transition. Instead of the perimeter players crashing to make sure the rebound is secured, they are more prone to leaking out to pick up the pace to more of Russell’s liking.

All in all, the Nets have been bullied enough in the paint to where a Break Out Mozgov to Stop the Bleeding option may be in the cards soon.