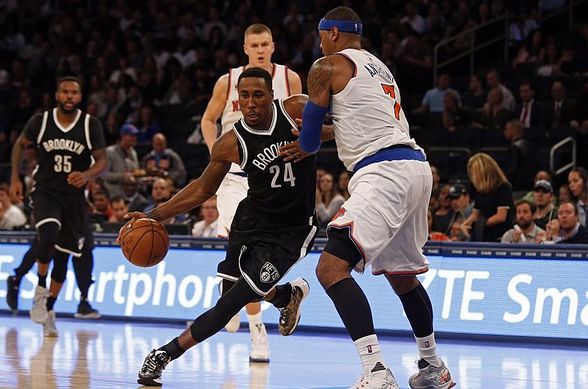 Site Manager Nicholas LeTourneau continues breaking down the Brooklyn Nets schedule in a three-part series. First up was back-to-backs and other key games. Here, he looks at revenge games and will end with a prediction of how the season will go. Stay tuned!

It’s only fitting the first game on the revenge tour kicks off against the New York Knicks. Jeremy Lin will always be tied to the Knicks (his Linsanity team was just immortalized in NBA 2K18 too), and as long as Carmelo Anthony is on the team, this will always be viewed as a revenge game to me. For whatever reason, Anthony never got along with Lin, and it shows every time they face off. Anthony seems to turn it up to another level against Lin, even going for hard fouls at times, but Lin has always taken the high road.

With the arrival of D’Angelo Russell, Allen Crabbe, DeMarre Carroll and Jarrett Allen, the Nets should be the best team in New York this season. The Knicks have had a lot of well-documented drama this offseason, from the constant Anthony trade rumors, to worrying about the future of Kristaps Porzingis in a Knicks uniform. While the Nets have an uphill battle to fight this season, they should match up well against the Knicks and come away with wins each time they face off.

To call D’Angelo Russell’s first trip back to LA a revenge game would be an understatement. As if trading him in a salary dump before drafting someone to take his place wasn’t enough to light a fire under him, new GM Magic Johnson didn’t hesitate to take some shots at him on the way out. Russell took the comments in stride, but don’t think for a moment that those words won’t be fueling him for a long time.

Los Angeles is ready to start taking steps toward a lasting rebuild after several years of mediocrity turned into flat out losing. They have the coach and a good balance of promising youth and veterans (Brook Lopez is going to have a career year in LA next season), and both management and ownership are operating in harmony. The Lakers are a team that is a few years away from being consistently good in an ever-improving Western Conference once Lonzo Ball and co. reach their potential.

But right now, they are in the same boat as Brooklyn. I’m expecting a giant game from Russell when he gets back to LA.

When the Brooklyn Nets signed Allen Crabbe to a gigantic offer sheet last summer, everyone around the NBA thought it was just a way to tie up other team’s budgets. But after completing a trade this summer to get him, people are singing a different tune. Crabbe spent his first four years in Portland and slowly grew into the sharpshooting player he is today, but could never truly spread his wings due to a logjam of guards and wings throughout his tenure in Portland.

Crabbe is someone who could take a gigantic step forward as a player in Brooklyn. His 3-point shooting will be a hand in glove fit with Atkinson’s offense, and I truly believe he is destined to become more than just a 3-point shooter. He runs the floor well, has decent handles and is good at hitting contested jumpers. Portland was kind to him, and I am sure he will get welcomed back with open arms, but he will want to come out and light this team up.

The Blazers did not think he was worth the money Brooklyn offered him and traded him for nothing in return. No matter how beloved he was by fans or how much his teammates like him, that fact has to be pretty motivating. He will have every opportunity to shine in this offense and will be a featured part of it. I am excited to see what he can do next season.

Quincy Acy has gone from D-League alum to actual contributor with the Brooklyn Nets. I’m still in awe of how he developed his 3-point shot, and Brooklyn is lucky to have him on the roster. If it wasn’t for all of the point guard injuries Dallas was experiencing at the beginning of last season, he would’ve never been cut and sent to the G League, where Brooklyn was able to nab him.

Acy harbors no bad feelings, and the Mavericks have said repeatedly they wish they didn’t have to cut him loose. But, that doesn’t mean he doesn’t play with a chip on his shoulder. He took it to Dallas last season as a member of the Nets, and next season should be no different. The Mavericks are in a rebuild, and Acy always takes advantage of the mismatches he creates against them. I don’t know exactly what it is about the Mavs that makes Acy play his best, but hopefully it is more of the same next season.