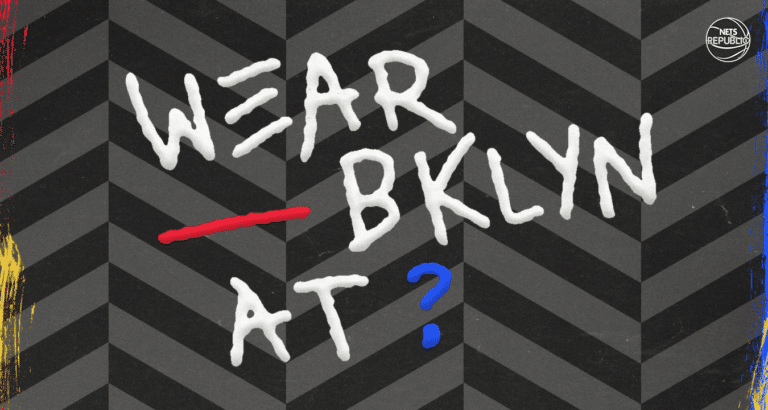 Wear Brooklyn At?: How The Nets Are Embracing Their Brooklyn Culture

Since their move to Brooklyn eight years ago, the Nets have truly adopted the borough of Brooklyn as their home. You see it through their outreach within the community and through their marketing. However, the one area they’ve truly flexed their muscle in over the past few years is incorporating their newfound Brooklyn pride within their jerseys.

In late October a photo leaked on Twitter revealing what appears to be the 2020-21 Nets “City Edition” jersey inspired by the artwork of Jean-Michel Basquiat. For those who don’t know, Basquiat is an artist of Haitian and Puerto Rican descent who was born in Brooklyn. He’s most known for his unique art style as well as being a significant figure in the graffiti art scene during the late 70s. He would eventually transition to international exhibits and galleries. The design for the jersey, which can be seen in the below tweet, is patterned in the iconic stylings of Basquiat’s artwork.

This now makes the third Brooklyn Nets jersey inspired by a famous Brooklyn native. The first two being the 2018 Nets City Edition Notorious B.I.G. inspired jerseys, which the team dubbed “Brooklyn Camo”. Last season the Nets stuck with the “Brooklyn Camo” design but instead of a black jersey, it was white with the words “Bed Stuy” across the chest. This design paid homage to the well-known area of Brooklyn where many cultural icons have originated from. The team has also had jerseys inspired by Brooklyn as a whole. In 2014, the Nets rolled out a Brooklyn Dodgers inspired blue sleeved jersey. In 2017, the team’s inaugural City Edition jersey was inspired by the Brooklyn Bridge.

Nike became the official apparel sponsor of the NBA in 2017 which got rid of traditional “home and away” uniforms. The City and Statement uniforms have allowed the Nets to really embrace Brooklyn over the past few years. It will be interesting to see how the franchise continues to show its newfound Brooklyn pride while also incorporating its New Jersey roots. With the excitement surrounding the team with a new high profiled coach, two superstars, and a great cast of supporting players, the stage is set for some fireworks at the corner of Flatbush and Atlantic.

What could be next on the docket for a City Edition Brooklyn jersey? Another attempt at a Dodger blue uniform? A jersey concept that incorporates elements of Coney Island? Perhaps a jersey that says “Kings County” across the chest could be in the near future. Just like this team, the sky is the limit.