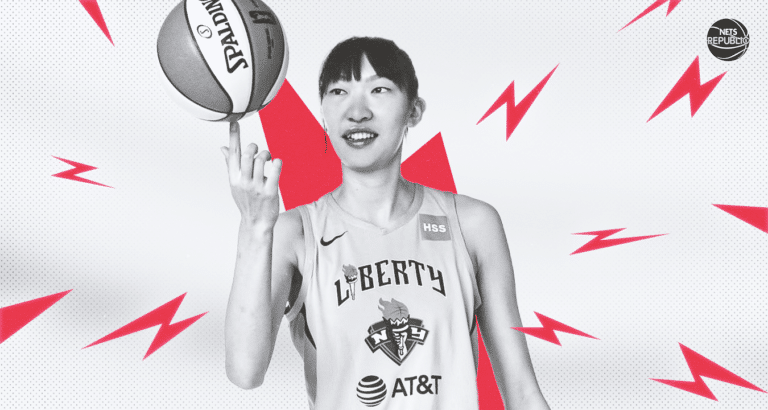 The New York Liberty were missing several international allies during their Bradenton endeavor last summer. Among them was center/forward Han Xu, who celebrates her 21st birthday on Saturday, whom the team is ready to open back with open arms come 2021.

A 6’9 native of the Chinese province of Hebei, Han made history during the Liberty’s second-round pick (14th overall) of the 2019 WNBA Draft. She became the first Chinese-born player chosen in the WNBA Draft since Zheng Haixia went in the second of the league’s inaugural selection proceedings in 1997. While Han struggled to find a consistent place in the Liberty’s rotation, she immediately endeared herself to the New York fanbase. The cozy confines of Westchester County Center were routinely rocked by the supporters’ demands that she enter the game and the cheers that ensued once she removed her warmups to check-in. Han would end her rookie season averaging 3.0 points and shooting 41 percent from the floor.

“I was shocked so many people cheered for me. I didn’t know why that happened. But I was happy,” Han said of the fan support she’s received, though translator Xiaoxue Chang. “So when I’m on the court, I will play for everyone, myself, for the team.”

With Han set to potentially make her return to seafoam-tinted shenanigans in 2021, NetsRepublic has several reasons why the Liberty’s new fans in the Borough of Churches should be excited about her American reemergence.

She has shown a fondness for the three-pointer

Conventional basketball wisdom says Han should be more of an interior prescience rather than holding court at the top of the key, but she showed a propensity to shoot the triple. Over 18 games of action during her rookie season, Han shot 50 percent (5-of-10) from three-point range. It was, in fact, a Han triple that served as her first WNBA field goal, sank during a June 2019 visit to Indiana.

A team and system that put up over 600 three-point attempts in an abbreviated must relish such an early output. Though Han did not partake in his debut campaign, Liberty head coach was looking forward to working with Han, particularly because his pre-New York endeavors centered on player development.

“I think you look at Han, with (a height) of 6’9, with three-point shooting ability, with skill, and how young she is and how much has to grow, she’s absolutely part of the plan,” Hopkins said in his introductory press conference. “There are players around the league where you’re like ‘man, if I could get my hands on that player for three months, they could really be good’. (Han and Marine Johannes) are two of them.”

She’s fearless on the court

The Liberty’s rebuilding period has been tough on their loyal fanbase but has also been filled with occasional flashes of brilliance that soothe the blow of losing and foreshadow the potential times of prosperity ahead. Some have been obvious, like Sabrina Ionescu’s 33-point in only her second career game. Others require some digging below the surface, like a small showing from Han during a July 2019 loss to the Las Vegas Aces.

With the Liberty down by a sizable deficit, Han played the entirety of the fourth quarter and sank a triple that shook the foundations of the aging Art Deco-adorned relic in White Plains. A more daunting challenge awaited on the other side of the floor, where Han was tasked with keeping Las Vegas star Liz Cambage in check for the remainder of her run time. Cambage had scored 21 points through the first 30 minutes, but didn’t even get a shot off while covered by Han. The rookie even forced a turnover that led to a New York opportunity in transition.

Dealt a situation that would probably cause most rookies to bring and make excuses, Han said that she accepted such duties with little to no hesitation.

“As a rookie, I’m not afraid of anything. Doesn’t matter how big Cambage is,” she said through Chang. “I’m tall, too.”

She knows how to win at Barclays Center

Barclays Center probably hasn’t been standing long enough to earn a Yankee Stadium-style nickname, the building was, at least for one night, the House that Han Built.

The Liberty’s Brooklyn chapters began with a showdown of Han’s past, present, and future, as they battled the Chinese national team in an exhibition showdown. Han scored the first Liberty points in their new home and wound up earning 19 points (6-of-8 FG) and five rebounds in a come-from-behind victory in May 2019

Though Han proved to be a thorn in the side of her former compatriots that night, she has returned to her country and has continued to be a force to be reckoned with. NetsRepublic’s own Myles Erlich documented Han’s success back home in his latest, nothing that she’s currently leading the Xinjiang Magic Deer in scoring, rebounding, and blocks. Han also tallied a career-best 31 points in a blowout win over Tianjin earlier this month. She is expected to rep the team at the upcoming Summer Olympics in Tokyo next year.

I honestly cannot wait for #ThankyouByeBye with Han 😭😭😭

She holds a strong friendship with Amanda Zahui B

One of the most consistent silver linings of the Liberty rebuild has been the friendship between Han and fellow import Amanda Zahui B. The two hit it off instantly through interior representative workouts and wound up creating the social media tradition of “#ThankYouByeBye”, a practice-ending tradition where the two take turns bounce passing their basketballs back to the rack. The two’s friendship was even briefly commemorated in a public service announcement created by New York City’s pro sports teams encouraging unity in the wake of the ongoing health crisis. Zahui B responded to the inclusion, pointed out by Ehrlich, by longing for the resumption of the tradition on Twitter.

Adjusting to her new teammates was a simple process for Han. Her locker neighbor Asia Durr would translate questions from the press for her when a translator wasn’t readily available. The pair each joined the Liberty during the 2019 draft (Durr going a dozen picks prior at No. 2 overall) and they developed a strong relationship when Zahui B went overseas to partake in the EuroBasket tournament.

“I definitely have a lot of fun playing basketball with them,” Han said of her new teammates through another translator, Hannah Rothkuo. “It’s been such a cool experience and they’ve all been so supportive and so helpful to any of the questions that I have.”