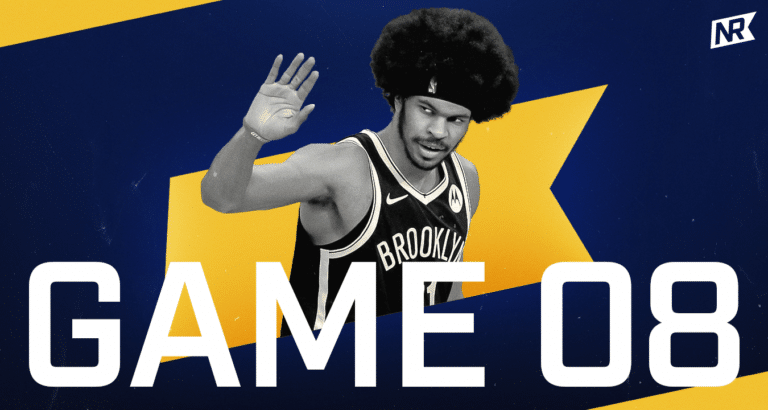 Three Takeaways From the Brooklyn Nets’ Win Against the Utah Jazz

With the Brooklyn Nets under .500 — sitting at 3-4 — compounded with news Kevin Durant was going to be out for the next few games due to COVID-19 protocols, things were not looking bright heading into Tuesday night’s game. However, Brooklyn came out like a team on a mission against a tough Utah Jazz ball club and handled them easily. A game that was never in doubt from the opening tip.

With so many positives coming from the game here are three that really stood out.

One of the biggest hot-button topics for the Brooklyn Nets has been the rotations coach Steve Nash uses, especially since Spencer Dinwiddie went down. For the past four games, Timothe Luwawu-Cabarrot had been inserted into the starting lineup. Now without the services of Kevin Durant, Nash decided to switch up the entire rotation — beginning with the starting lineup.

Nash rolled out a starting five of Kyrie Irving, Bruce Brown, Taurean Prince, Jeff Green, and Jarrett Allen. You could almost hear the sounds of exuberance coming from Nets Twitter who have been craving not only for Jarrett Allen to start but also for Bruce Brown to get minutes. Well, their wish was granted and then some.

Brooklyn came out with the type of energy that hadn’t been seen since all season. They were flying to the ball on defense, gang-rebounding (which must’ve made Steve Nash happy), and getting out in transition. Before you were able to sit down with your food and adult beverage … the Nets had jumped out to a 9-2 lead.

Brooklyn would go on to start the first quarter on a 25-7 run with contributions coming every which way, but especially Kyrie — who went off for 18 points in the period. In fact, Kyrie outscored the entire Jazz team 18-14 in the quarter.

The second-unit, which now consisted of Harris and Luwawu-Cabarrot, also included Tyler Johnson, who made an immediate impact hitting a three as soon as he checked in. Although there was a slight moment in the second quarter where it looked like the Jazz might make a run, the Nets bench unit stayed strong and held their own.

The second half was more of the same with guys hustling on the boards and rotating on defense. You know it’s a good night when the starters get to rest for the fourth and you get to see looks for Chris Chiozza and Reggie Perry.

The Force of “The Fro”

Maybe he was inspired by finally getting the start or perhaps he was fresh off a really solid night of gaming. Whatever it was, Allen came out like a man possessed against the Jazz. You could see from the opening tip, Allen had a spring in his step. He was going toe-for-toe with the two-time DPOY Rudy Gobert and frankly, he outplayed him.

Allen was a force on the glass finishing the game with 18 rebounds in only three-quarters of work. He also poured in 19 points and had a sensational posterizing dunk over Gobert in the second quarter which had the Nets bench and Nets Twitter buzzing. Not only that but Allen was a presence in the paint too with two outstanding blocks on Gobert.

.@KyrieIrving goes behind the back to @_bigjayy_ who THROWS. DOWN.

This is the type of play fans and analysts know Allen is capable of and this performance will certainly have coach Nash think twice before inserting DeAndre Jordan in the starting lineup moving forward. With Allen passing the test against one of the league’s formidable big men, it’ll be interesting to see how he fairs against Joel Embiid in the Brooklyn Nets’ next game against the Sixers.

There has been no player scrutinized more (aside from DeAndre Jordan) so far on the season than that of Caris LeVert. And rightfully so. He has been underwhelming to say the least since the team’s first two games. With  Durant out and the rotation sure to be shaken up it was the perfect opportunity for LeVert to get back his footing. And he did not disappoint.

Although he started the game missing his first five shots but then quickly rebounded by making his next three. LeVert exploded in the second half  — especially in the third quarter, dropping 14 points. Caris would finish the game with a stat line of 25 points, five assists, and two steals. Simply put, he was making the shots that weren’t falling in prior contests.

Hopefully, for the Nets’ sake, this wasn’t just a flash in the pan and LeVert can keep up this type of play. Everyone knows what he is capable of offensively so it’s not a case of can he do it but can he do it consistently. Brooklyn is going to need Caris to be that offensive catalyst off the bench if they intend to be the championship contender they strive to be. Tonight was a good start.

Although it’s three takeaways, I would be doing a disservice by not mentioning two guys who had Nets Twitter in a frenzy. Kyrie Irving and Bruce Brown. For Kyrie, there really isn’t much to say. That man is a magician with the basketball and it’s literally awe-inspiring watching him play this sport sometimes. When he catches fire, strap in because you’re in for a show. He finished this game with 29 points and six rebounds. Not to mention he was five-of-seven on three-point field goals.

As for Bruce Brown, he did exactly what people thought he would do. He brought the energy on defense and it was apparent every second he was on the floor. Brown gave a little bit of everything in this game. In the first half alone he had six points, four assists, and five rebounds. Even though he didn’t add much stats to his total in the second half, he really didn’t need to. His first start was a rousing success and this type of play and effort is something Nets fans should expect whenever he is on the floor.