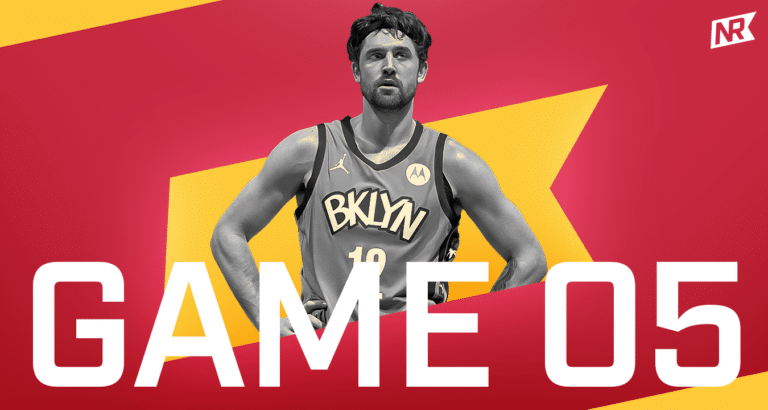 Three Takeaways From the Brooklyn Nets’ Win Over the Atlanta Hawks

In a thrilling display of offensive firepower, the Brooklyn Nets outlasted the Atlanta Hawks 145-141 on Wednesday night

The No. 1 offense in the NBA, the Atlanta Hawks, and an offense commanded by Kevin Durant and Kyrie Irving — two scoring aficionados with seemingly no weakness on that side of the floor — did not disappoint spectators on Wednesday night. The two seams scored. A lot. Luckily, the Brooklyn Nets came out the other side with a needed win.

So, without further adieu … let’s zone in on three takeaways.

A Tale of Two Centers

Jarrett Allen may not be the Brooklyn Nets’ starting center, but if he maintains this level of play — and DeAndre Jordan continues to struggle — that is subject to change, quickly. Allen, who is now leading the league in total offensive rebounds (22), has arguably been the Nets’ third-best player this season.

He’s excelling in his role as a rim protector, who is more than capable of switching onto perimeter players and keeping them in front of him and has been an absolute menace on the offensive glass. Meanwhile, Jordan, 32, now in year 14 of his career, is — quite frankly — struggling to keep up with the pace.

He’s frequently out of position on defense, getting beat to the cup with regularity or burnt in drop coverage, lacks a physical presence on the offensive glass, and is overall just languid in his movements. There’s no sense of urgency. It appears like he’s almost trying to play himself into game shape, while Allen is trying to prove to the coaching staff he’s the more suitable option down the stretch. And to start games.

Unless Jordan’s reticent in-game body language does a 180, and fast, he’s a liability on the floor. Of all the Nets’ storylines, this is quickly becoming the most interesting one to monitor.

Allen finished with 15 points and 13 rebounds on Wednesday Night. Jordan managed a modest five points and one rebound.

The Other Guys Get Going

It was quite apparent that the Nets’ depth pieces needed to play better than was the case against the Hornets or Grizzlies in the team’s consecutive defeats. Though Irving got off to an uncharacteristically bad start — he shot just 3-16 in the first half — the Nets were only down a single point.

When they needed secondary scoring, Joe Harris, Landry Shamet, Taurean Prince, even Allen answered the call. Prince, who entered Wednesday’s exhibition shooting a fetid 16.7 percent from the field, straight up did not miss a shot in the win. He went 5-5 in his attempts, as did Shamet — who had pronounced struggles of his own. Seven Nets finished with double-digits in the shootout. Harris had his best offensive game of the season, finishing with 23 points on six-of-eight shooting from three.

Jeff Green, who saw an extended stint at the five in the Nets’ small-ball lineup to counter that of the Hawks’ own iteration of the same, showed glimpses of succeeding in such a role. He proved dynamic for the Rockets as a five in the playoffs, making correct reads in the short roll or stretching the floor beyond the arc. Alongside Kevin Durant in a frontcourt, head coach Steve Nash has something intriguing to play with here.

Enter Sandman. Mariano Rivera coming out for the bottom half of the ninth inning. Except there are two Riveras, and now you’re just completely overwhelmed. If Durant doesn’t have it down the stretch, there’s Kyrie Irving — and vice versa.

Though Irving struggled in the opening half, as mentioned, he found his groove when it mattered most. Entering the final frame, he had just eight points. He finished with 25.

Kyrie Irving, despite struggling in the first 3 Quarters, just had 17 Points in the 4th Quarter, helping secure the Win for the Nets

Top 2 PG in the NBA pic.twitter.com/1cww5XFN5V

His partner-in-crime, the basketball anomaly that is KD, finished with a game-high 33 points. He also tallied 11 rebounds and eight assists, coming close to his first triple-double as a member of the Brooklyn Nets. The team needs their complementary talents to rise to the occasion, but when it’s time to close shop … that’s when 7/11 opens.