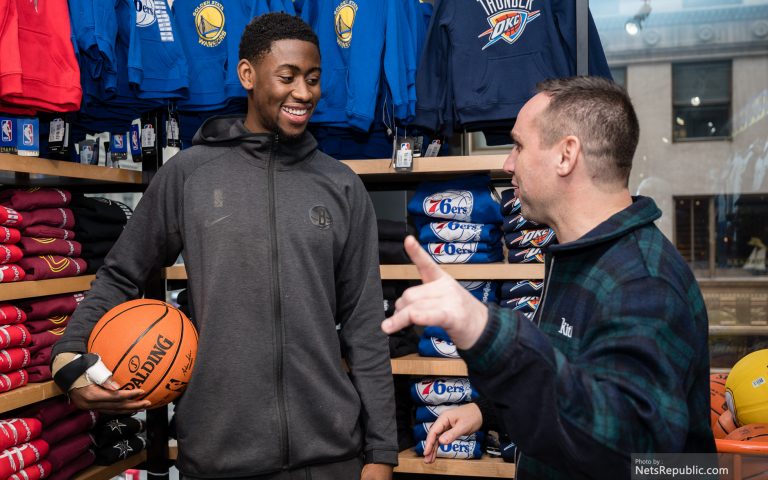 Hopefully, everyone is buckled up, because it has been quite the rollercoaster start to the season for the Brooklyn Nets.

Caris LeVert was felled in Game 9 with ligament damage to his thumb. After two more losses without LeVert, Kyrie Irving was sidelined with a shoulder impingement leaving the Nets sitting at 4-7 and missing two of their best players. Spencer Dinwiddie has more than kept the team afloat in their absence and has made a serious case to be named an Eastern Conference All-Star. With the Nets sitting at 16-13 and 7th in the Eastern Conference standings, Nolan Jensen and Gotham’s Reckoning join forces to discuss additional options for Caris LeVert when he returns.

Trying to figure out how best to utilize Caris LeVert in this current rotation is, well, frustrating. It’s hard to articulate. You know there is a way for the cards to fall in favor, but getting to that point requires shuffling the deck a couple of times. Should he start? Should he act as a sixth man, or perhaps the newly-acknowledged seventh man? Who should he play in a backcourt with? Should he be asked to alter his approach on the offensive end, or should Kenny Atkinson put him in a situation that best fits his playstyle? Or, and this should go smoothingly with LeVert stans on NBA Twitter, should he, possibly, maybe, perhaps…be traded?

Let’s dive in and also strategically dodge any incoming negative comments shunning such a blasphemous (shoutout Stephen A.) notion.

Despite the negative connotations often associated with having two high usage players that are not great shooters from the perimeter, the combination of Dinwiddie and LeVert have provided beneficial minutes when paired together: Net rating of +16.3, with a TS% of 57.5.

Though such stats are not perfect and do need context behind them, it also provides some clarity on how two players who operate best with the ball in their hands might actually be able to work in unison.

You immediately get glimpses into the future of the tandem wreaking havoc on second units in the association; head coaches would not just have to prepare for an equally impressive starting five but two players capable of high-scoring averages coming off of the bench. Brooklyn currently has the 24th highest scoring bench in the NBA—a major step down after finishing 2nd in the league in the 2018/19 season—the duo could give Kenny Atkinson a major lift when the starters hit the bench to refuel on some Gatorade.

Likewise, it is also noteworthy to mention how teams—such as the Los Angeles Clippers—are constructed, being that they have not just an elite sixth man on their roster, but a seventh as well (Williams/Harrell) to complement their top-heavy talent. This is not to say that Caris and Spencer will operate with the same level of efficiency, but you can’t deny that it could work in favor of Brooklyn to have two players of such magnitude bolstering their second-unit.

Of the 30 coaches around the NBA, many are faced with trying to compensate for a lack of personnel on the court through schemes, diversions, obscure rotations, etc. Kenny Atkinson is poised with about as good an issue as a general could be faced with: trying to figure out how to work around having too much talent.

The dead horse has already been kicked, I know, but looking down the line with Kyrie Irving eventually returning from his shoulder injury, Caris LeVert returning from his thumb injury and even further with Kevin Durant returning sometime in the next 365 days, the Nets will possess four pretty ball-dominant players on their roster. That obviously has its benefits, but it also has its complications.

Now you could—hypothetically—throw out a line-up with three ball-handlers; like Irving, LeVert, and Durant, for example. It could work, or do the polar opposite. Implementing LeVert with the starters will likely relegate either Joe Harris (if he re-signs, of course) or Taurean Prince to the bench. That may not sound like a big deal to some, but both players shooting gravities really ignite Atkinson’s motion spread offense which predicates on getting shooters open from the perimeter. And since both players are elite catch and shoot threats, they’re best suited with an Irving and Durant type rather than another ball-handler that has high usage rates like LeVert or even Dinwiddie.

We are all fully aware of LeVert’s upside, hell, most of us have advocated for an All-Star-like campaign for the 25-year-old. It may appear like a demotion to some, but it really isn’t. He’d likely still see 25-30 minutes per contest, and if he’s playing within the flow of the offense and has it going that night, would probably finish off plenty of contests down the stretch.

Inject the two-headed monster that is LeVert/Dinwiddie into my veins, or however that saying goes. I’ll advocate that it’ll work seamlessly, like Cal Naughton Jr. and Ricky Bobby did, “Shake and Bake!” Is there a movie more heavily referenced in pop culture than Talladega Nights?

I digress. Take the stage GR.

Devil’s Advocate – A Case For A Trade: by Gotham’s Reckoning

This pains me to write. Partly because I’ve come to associate LeVert so closely with rapid rebuild that has taken place. And partly because Caris LeVert, by all accounts, seems to be one of the most genuinely great people in the National Basketball Association. But with Kyrie Irving and Kevin Durant in place, it is up to the front office to put the appropriate pieces alongside them to put the Nets in position to compete for the Larry O’Brien trophy. If LeVert does not fit in as one of those pieces, he presents the best opportunity to acquire them.

For the sake of argument how about we take a look at the last 16 teams to win an NBA title, and their regular season offense and defense rankings:

The last time a team won an NBA championship while lacking a top ten offense OR defense was the 2003-2004 “star-less” Detroit Pistons. Clearly, with Kyrie healthy the Nets looked and performed like a top 10 offense even sans Durant. The question at hand – will the team be able to build a top 10 defense with the primary addition, as of now, being Kevin Durant?

In LeBron-Warriors super team era, we’ve fallen into the Star+Star+Star=Contender thinking while at the same time somewhat devaluing the idea that fit and role players matter. The first iteration of the Heatles lost to a better TEAM in the Dallas Mavericks. Chris Bosh took time to slide into role that Chemistry takes time, and depth matters.

So, what is LeVert’s value to the team when they are positioned to contend with the return of Durant? How do you juggle four high-usage guys, and if LeVert is not as efficient offensively as the others, can Caris turn himself into a star (in his role) player?

The 3-and-D nomenclature is overapplied to players who don’t fit the qualifications, but the value of such players is not exaggerated, especially for teams with championship aspirations. Nets have strong shooters who would best be described as mediocre defensively (Harris and Prince), solid defenders who are mediocre to average shooters (Temple and possibly Nwaba), and a couple of wild cards (Musa and Kurucs).

The ideal player fitting into a supporting role is efficient offensively on lower usage, and expecting an abundance of open looks from three with Irving and Durant drawing the focus of the defense. LeVert has filled a very different role thus far in his career, and one concern to this point is how different that role has been then it would be going forward:

His shooting efficiency has declined each year (with an admittedly small sample size this season), and his shot profile has shifted away from primarily outside the arc to the midrange as his shot creation skills have developed. He was shooting 36% from three prior to injury on 36 attempts, which would be a career high mark.

LeVert has shown throughout his career the increasing ability to get himself a shot. He gets into the paint with relative ease, and shimmies and shakes his way into decent look. He’s been consistently solid scoring in isolation situations.

However, the most valuable offensive skill set alongside the new duo will likely be outside shooting. As far as catch & shoot opportunities, after shooting 37% on 149 attempts in the 2017-2018 season LeVert shot 27% on 66 attempts in his injury shortened 2018-2019 season. If he will be squeezed into a role highly dependent on success in this one area, which Caris should we expect going forward?

It feels like an eternity since Zach Lowe called LeVert a future All-Defense player. As easy as it is to see the growth in his offensive game, LeVert on defense is another story. Isolation shows the tools of a strong defender that his profile indicates, other aspects of defense show the lack of feel and understanding of team defense concepts. He’s consistently graded out as one of the worst in the league at defense P&R ball handlers.

The big picture is important, it would be reckless not to consider how the big pieces will fit together and just assume talent + talent = success. Finding players that will fit alongside Irving and Durant may be the path to unlocking the championship opportunities for this new core. Then you rewatch his performance in Game 4 against the 76ers last season, and struggle to fathom LeVert’s true ceiling.

For a guy who’s development has been put on hold due to poor injury luck, the flashes are more than tantalizing, they’re intoxicating. It is not hard to swoon into visions of All-Star Caris LeVert, a guy who is a perennial All-Defense contender. And then you sit back and weigh the concerns.

So it really comes down to whether trading Caris LeVert for a piece (or pieces) more complementary to Kevin Durant and Kyrie Irving would provide more value than squeezing him into a role he may never fit. So, what is the right answer? Well, I’m gonna go nuke a bag of popcorn, rewatch Game 4, and punt on that predicament to a front office that has earned the benefit of the doubt.

If you agree, disagree or just feel like interacting you can follow GR at (@gothamreck) and Nolan Jensen at (@N_Jensen1995)