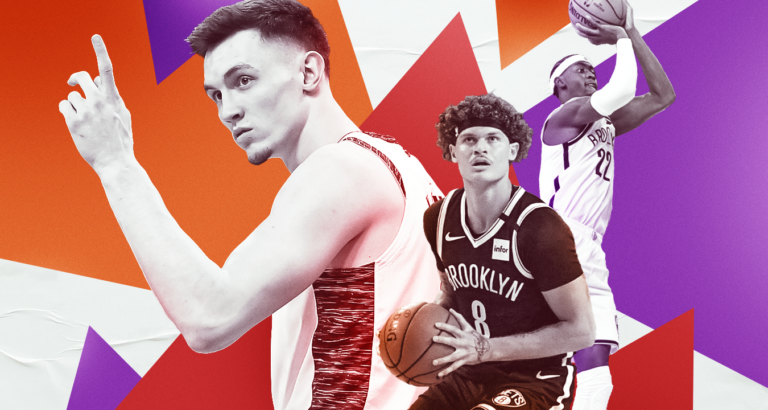 Basketball is back… kind of. In the past week, each NBA team has played three exhibition games at the ESPN Wide World of Sports Complex at Disney World in Orlando ahead of the NBA restart on July 30. Teams played games on a barren court proudly having bold “Black Lives Matter” lettering. The games were unpolished, even awkward at times. Nevertheless, players slowly but surely were able to adapt to the new playing circumstances and new teammates.

As for Brooklyn, coach Jacque Vaughn was forced to experiment with new lineups, combinations, and schemes. Longtime Sean Marks favorite Tyler Johnson was a clear bright spot, averaging 14 points in 17 minutes over the two-game span he played. Let’s take a look at what the exhibition games revealed about the Brooklyn Nets going forward in the bubble.

Since starting Center DeAndre Jordan and third-string Nicholas Claxton both opted-out of the NBA restart, Jarrett Allen was left as the only traditional center on Brooklyn’s roster. Jordan’s departure left the Nets with an open roster spot, prompting the acquisition of Donta Hall, a standout big for Grand Rapids Drive, the Pistons’ G League affiliate. Hall was reportedly still in quarantine during Brooklyn’s training camp, and coach Vaughn decided to keep him out during the exhibition games.

These unlikely circumstances culminated in a vacancy at backup Center, which was filled by the Latvian sophomore player Rodions Kurucs. Kurucs shined in his rookie year, primarily starting at power forward. Kurucs is a 33% career shooter, but he shot 8-for-12 on deep balls, albeit on an extremely small sample size. This seemingly random eruption in long range shooting can be made clear simply by noticing where these shots are coming from. In the Nets offense, the center is primarily used in dribble hand-off actions at each elbow. Afterwards, the center can either roll to the basket or pop out to the three point line. A taller center like Allen usually will opt to roll, but Kurucs has been gunning from foul line-extended.

The Latvian was prolific from above the break threes this season, hitting them at a near 40% clip. These high shooting numbers continued in the exhibition games, and one can expect them to stay high if Kurucs continues to receive time at the small-ball 5 position.

In the Summer 2016, Tyler Johnson – then a member of the Miami Heat – was offered a four year, 50 million dollar contract by Sean Marks and the Brooklyn Nets. Make no mistake, this was an overpay. Johnson told the Sun Sentinel: “I threw up a couple of times when I heard the number go out there. I was in shock. I even lost a little bit of weight, because just the anxiety of going through that whole process and not knowing where I was going to be. … I was like almost 100 percent sure I was going to end up in Brooklyn. But, yeah, it’s an incredible feeling. And I’m excited to get back to work.”

Four years and two teams later, Johnson has finally ended up in Brooklyn. After a salary-dump trade to Phoenix led to an unexpected drop in production, Johnson was waived by the Suns and out of the league. Once the transaction window opened on June 23, Theo Pinson was waived in order to create roster space for Johnson. Sean Marks always gets his guy.

Still getting acclimated to the Nets’ system, Johnson the first of three scrimmages for the Nets. Once a 38% marksman from deep, he showed flashes of his old jump-shooting self in his two scrimmage outings for Brooklyn, connecting on 3 of 5 triples against San Antonio and 2 of 3 against Utah.

Tyler Johnson showed off his three-level scoring abilities, taking defenders off the dribble to the rack and pulling up for free-throw line jumpers keeping the defense guessing. I loved what I from him in transition, namely spotting up from behind the arc and nailing catch-and-shoot opportunities. If he’s able to keep up the formidable shot creation and shows flashes on the defensive end, he could be a solid 11 or 12th man for the Nets next year, as they look to contend.

Caris LeVert has a new look, and a whole new role in the offense. The headbands and dreads will quickly become synonymous with Caris doing absolutely everything with this Nets squad, a shell of what it once was. LeVert proved to the rest of the league that he was ready to take that next step in March before the unfathomable happened; the NBA season was put on pause. He led a comeback effort from a 21-point deficit, dropping 51 on the Celtics in Boston. He embarrassed San Antonio on a Friday night at Barclays. Now, he’ll be giving that opportunity every night. His score-first backcourt mate Spencer Dinwiddie has opted out of the NBA restart due to a positive COVID-19 test, and his replacement Chris Chiozza will be looking to create opportunities for No. 22 whenever possible.

LeVert has become a maestro in the pick and roll, swerving around defenders to deliver his patented mid-range floater. He’s excellent at using his body – also known as “putting your defender in jail” – to keep his defender behind him to create a 2-on-1 advantage with the screener and his man. His decision-making isn’t perfect, but it’s far from lousy. He can decipher who the big man has committed to guarding, and will deliver a precise pass to a rolling Jarrett Allen if left open.

I’d like to see him start to draw contact using the defender on his back, in an effort to draw And-1s and put up an extra point on the board. He’s beginning to flesh out a step-back move which counters defenders sliding under the screen.

With the team on his back, Levert’s 27 and 23 point outings against the Spurs and Jazz, respectively, have proven that he’s ready to bear the load necessary for a successful Disney restart for the Nets. Now, will his teammates be able to pick up the slack?