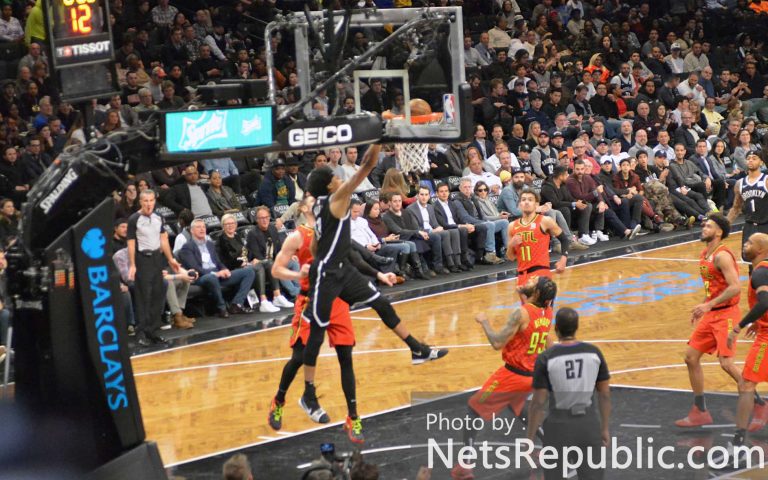 The Atlanta Hawks came to Brooklyn on Wednesday night for a meeting with the Nets, and after a shaky first half, the Nets managed to emerge from the night with a 116-100 victory. Let’s talk about how it all developed.

It was really a tale of two quarters for the Nets. The first one went about as poorly as you could expect, with the Hawks able to score at will and the Nets unable to get anything going even with how bad the Hawks defense has been this season. If you came in expecting the Nets to play as well as they did the first time these teams met, then you were in a state of shock by the end of that first quarter.

John Collins was a big part of that early success. The Nets put Jared Dudley on him. They put Jarrett Allen on him. Didn’t matter much, though Allen did manage to block Collins at one point. That was really the highlight of the quarter. Collins ended the game with 30 points as he was really the one person Brooklyn couldn’t figure out.

Overall, the Nets were down as many as 19 in the first half, but D’Angelo Russell and Spencer Dinwiddie had some moments, and the Nets used the zone more on the defensive end. It was 57-51 at the half as the Nets went from looking completely out of it to back and ready.

Oh, and Rodions Kurucs did these things:

Love this play. There is no one of the left side of the court here for the Hawks to go out and guard Kurucs, which also means that there’s no one who is in position to step up and prevent him from cutting to the hoop. Dinwiddie drives, Hawks have four guys who have basically built a wall to stop him, and he’s able to pass the ball over them and get it to the cutting Kurucs for the dunk.

Dinwiddie deflects the pass from Lin and Kurucs is right there to grab the loose ball. From there, he’s off to the races, with neither of the Hawks that are in pursuit able to keep up as he jams down the dunk.

Remember when Kurucs had the steal and slam in the first half? Well, in the second half he went ahead and did it again:

Then Joe Harris got hot, and the Nets pretty suddenly had the lead. The Hawks managed to keep it close for awhile and even snatched the lead back for a little bit, but the Nets did what good teams should do — they pulled away and won by 116.

Here are some highlight plays of the second half:

What about on the other end of the court? Does he do things there?

Yes. Allen ended the game with three blocks to go along with his 11 points and five rebounds. It wasn’t a huge night on the stat sheet, but you could feel his presence when he was on the floor.

But Allen also played just 25 minutes as Ed Davis was giving the Nets his all, allowing Allen to sit more. Davis grabbed 16 rebounds, the most for a Nets bench player since Jamie Feick did it in the 2000-2001 season. (Shouts to Feick, who I knew a lot about growing up because NBA Live 2003 had a career mode that would award Feick with the Sixth Man of the Year award every year.

Other stat notes: Russell had 23. Harris had 16. Carroll had 17. Overall, seven Nets were in double figures.

Dudley left in the second half with a hamstring injury and didn’t return.

Hamstring injuries are always tricky, and we don’t know the severity of the injury for the Nets, but Dudley is likely going to miss some time. So, what will the Nets do with the rotation without him?

We could see more Ed Davis at the four, but Kenny Atkinson hasn’t really shown any willingness to do that this season because it doesn’t really fit what this team wants to do. The best bet, then, is that DeMarre Carroll returns to the starting lineup until Rondae Hollis-Jefferson. Last year, Carroll started all 73 games that he played in for Brooklyn, but he’s come off the bench exclusively this year.

Another option could be to size things down and do something like Allen/Kurucs/Harris/Napier/Russell. That still gives you Carroll as a strong option off the bench, but it also limits some of what you’re able to do with your guard rotation as it leaves you without much depth there beyond Spencer Dinwiddie.

The Nets do have an incredibly tough stretch coming up, though, as they play the Raptors, then the Celtics again, and then the Rockets, so it might be a good idea to shorten the bench some for those games with Dudley out. Only Joe Harris played 30 minutes against the Hawks, so you should be able to put out some fairly fresh lineups.