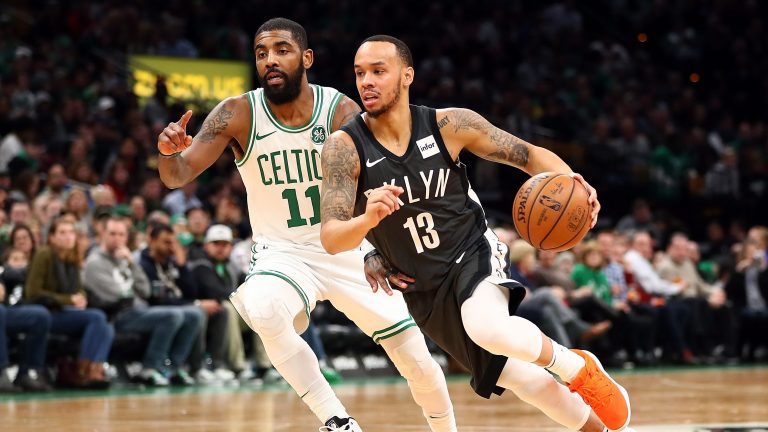 The last time the Nets went up against the Celtics they were able to secure the win thanks to some impressive performances from D’Angelo Russell and DeMarre Carroll. This time around it’ll be a completely different matchup. Here’s how the Nets can secure the upset win.

Continued Production From The Reserves

The Nets bench continues to exceed expectation. While the starters were off against the Knicks, the reserves were able to outscore New York’s backups 72 to 50. That scoring, energy and rebounding was a key reason they were able to grind out the win. They’ll need that and more as they come up a much improve opponent in Boston, as Atkinson pointed out.

“It’s a sign of a good program — when you can plug guys in that haven’t been playing or have been in the G League and they can still produce at an NBA level. I’m not sure we’ve had that in the past, but I feel like right now we can plug guys in. We can go 15-deep and we trust them.”

Brooklyn will be forced to dig deep into the rotation with their extensive injury list. Boston meanwhile has a near clean bill of health. With Graham and Harris both questionable it’ll be up to guys like Hollis-Jefferson, Carroll, Napier and others to pick up the slack.

Kyrie Irving’s play of late has been at an MVP level. That combined with the improved form of Tatum, Horford and Brown has the Celtics playing at a level most had predicted of them since before the beginning of the season.

Despite being only one spot ahead of the Nets in the Eastern Conference standings, Boston have the third best net rating of any team in the league. They’re top 10 on both ends of the floor with their glut of talent finally starting to gel at the right time. ESPN analyst Jeff Van Gundy noted the Celtics dangerous form in their matchup against the Warriors.

“If Boston has both, a good rate of improvement and health, to me they’re the team to beat regardless of what seed they come in in the Eastern Conference.”

Even in the space of two weeks, plenty has changed for the Celtics and the Nets will need to be engaged, especially defensively to limit the effectiveness of their deep roster.

“They’re a very cohesive group. Obviously, they’re one of the better teams in the Eastern Conference and they force a lot of turnovers. That obviously got them out in transition, got them easy buckets.”

The Nets committed 20 turnovers in their win over the Knicks. Such a number will lead to much more damage from an elite Boston team. The Celtics rank fifth in the league in points off turnovers per game (18.7). If Brooklyn can’t take care of the ball more carefully the’ll be duly punished by Brad Stevens’ well-drilled outfit.