Kyrie Irving: Home Is Where The Heart Is
Home
Brooklyn Nets
Joe Makar

Brooklyn Nets: For Kyrie Irving, Home Is Where the Heart Is

In the summer of 2019, Kyrie Irving, for the first time in career, got to hand select his destination. For him, the choice was simple: The Brooklyn Nets — the organization he fell in love with as a child.

As sports enthusiasts, we are — naturally — emotionally attached to our beloved teams. We rejoice when they do well; we are upset when they underperform, and we even experience the same array of emotions that the players do. This applies to NBA players as well. While not many of them will come out and publicize which team they grew up supporting for the purpose of being loyal to their fanbase, once in a blue moon, we learn the truth behind the inner fanatic inside the professional athlete.

Enter Kyrie Irving, the superstar point guard for the Brooklyn Nets, a West Orange native who attended Saint Patrick High School in Elizabeth, New Jersey. Now he not only plays for the Nets, but he represents them and the tri-state area with open pride.

When All-Star pitcher Gerrit Cole signed with the Yankees, he brought out an old sign from his childhood, a sign that proved that he was just as big a fan as the viewers watching. Now an iconic saying by Yankees fans, the sign read “Yankee fan today, tomorrow, forever.”

As an 11-year-old, @GerritCole45 brought a @Yankees sign to Game 6 of the 2001 World Series in Arizona. Today, as a 29-year-old, he brought that same sign – a little faded – to his introductory press conference in New York. pic.twitter.com/jHpTwLYQaF

While Irving’s Nets homecoming did not come with a catchy slogan that could be used for marketing purposes like Cole’s, he did post this heartwarming picture on Instagram shortly after officially signing his Nets contract last year. 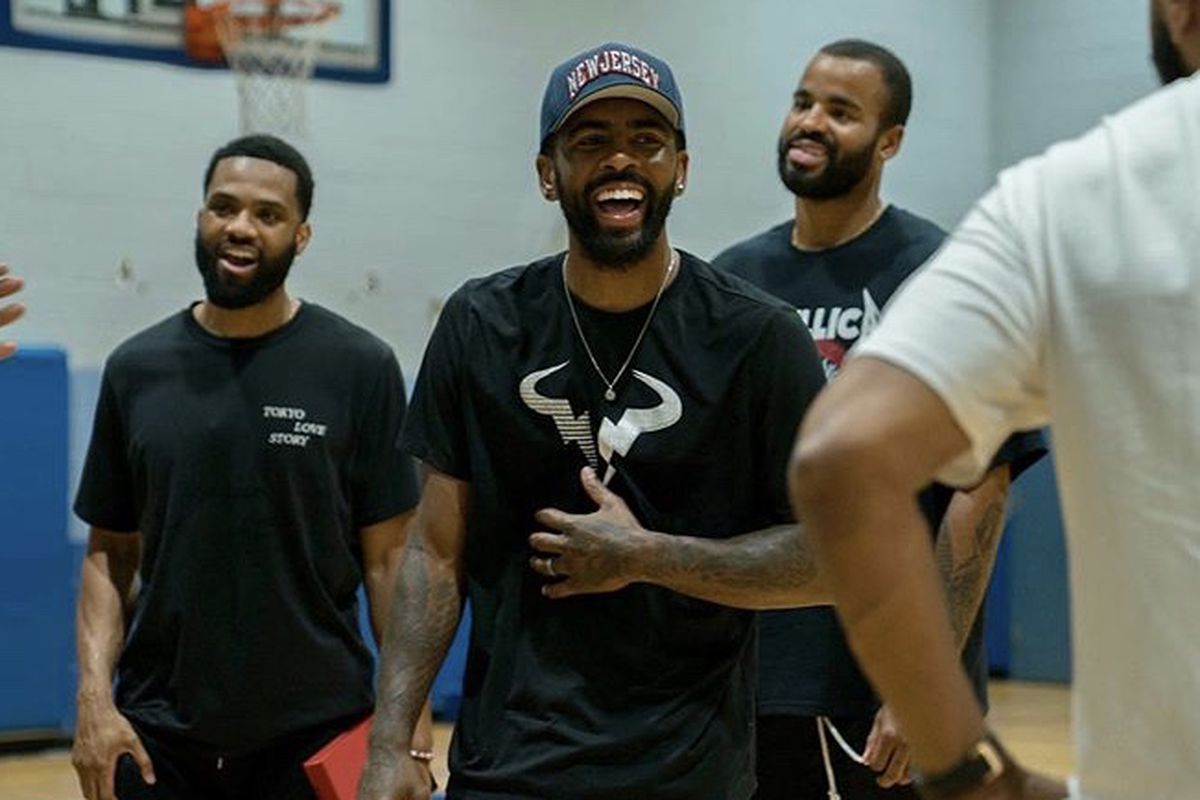 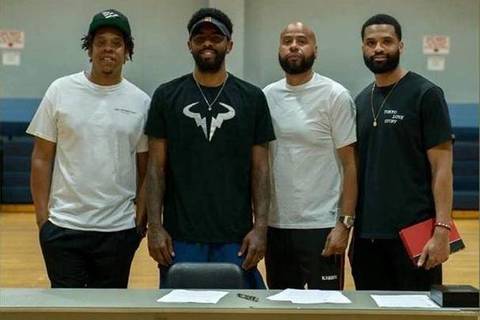 The Instagram post shows a young Irving holding up a New Jersey Nets ball with the caption “@brooklynnets It’s always been in the cards!” Certainly, a heartfelt coming home moment indeed.

The Nets ties didn’t end with an Instagram post. Irving also signed his Nets contract at his old middle school, Roosevelt Middle School in West Orange, New Jersey. In the first picture, you see Irving with a huge smile on his face and if you look closer, he was wearing a New Jersey Nets hat on the day of his signing. In the second picture, you’ll see a familiar face on the left, Shawn Carter, better known as Jay-Z, famous rapper, and former Nets minority owner.

Jay-Z used to attend Nets games during the team’s final years at Prudential Center in Newark, as well as their first few seasons in Brooklyn. Irving, along with many other prominent names in sports and music, is now signed with Roc Nation, a prestigious entertainment agency based out of New York.

On June 12th, 2019, 18 days before he would enter free agency, Irving, along with many other prominent names in sports and music, signed with Roc Nation, a prestigious entertainment agency based out of New York and founded by none other than the man pictured next to him, Jay-Z.

When Irving signed with Roc Nation, it almost seemed like a certainty at the time, he was coming home.

Irving now carries himself in a more mature manner than he did in his past stints with the Cavaliers and Celtics. The summer of 2019 was the first time in his career he experienced unrestricted free agency and finally got to choose where he wanted to play. It’s easy to see that he’s finally happy in Brooklyn. He grew up a fan of the franchise, he plays alongside his close friend Kevin Durant, and he plays close to his home state of New Jersey which makes it easy for his family to make it out to home games.

Part of the maturation we’ve noticed from Irving is in how he composes himself to the media and displays a team-first mentality.

“Before it used to be ‘let me get as many points and assists as I can.’ Now I want to bring a championship with my family to Brooklyn. Then we’ll have the biggest parade ever,” Irving said on the ETCS podcast, hosted by his teammate Kevin Durant.

The most fascinating thing about Irving is his creative mind and passions outside of hoops. He takes his job seriously and is relentlessly looking to perfect his craft, but there is so much more to his life than basketball. He has a love for art, he makes music, he was the star of his own movie (Uncle Drew in 2018).

He started a $1.5 million fund for WNBA players who opted not to resume their season due to health concerns related to the pandemic. He donated $323,000 and 250,000 meals to communities throughout New Jersey and New York. His most recent gesture of kindness was paying off the tuition of nine students at HBCU Lincoln University stating, “I’m grateful for all you young leaders.”

On and off the court, Kyrie Irving is an NBA superstar. He is a maestro with the ball in his hands capable of breaking down his defender and finishing under the rim with zesty finishes and flair like no other. Watch just one game of Irving, every night he has a few moments that make your jaw sink to your chest in disbelief.

Despite all the negative connotations attached to his name and past, Irving certainly lets his actions on the court and in the community do the talking.

Irving has been more active on Instagram lately, commenting on a few posts with some Nets pride, commenting “It’s our world NETS world!”

From a marketing aspect, the Nets have embraced their New Jersey history and made Irving the poster boy for their new classic edition jerseys, paying tribute to the 1990-91 Nets team that starred the late great Drazen Petrovic.

Irving, a lifelong Nets fan, talked about how he was in fourth grade sitting in the nosebleeds at the Continental Airlines Arena watching Jason Kidd in the NBA Finals.

“Growing up a New Jersey Nets fan, especially in the tri-state area, it was a different pride you had to have. I wanted to be like J. Kidd growing up. Knowing that I was once a fan and now I became part of it.” Irving claims.

We also have this video that Kyrie posted on his Instagram via Roc Nation Sports on July 1st, 2019, just a day after signing with the Brooklyn Nets. In the video, Irving discusses how he used to watch the Nets and dream of playing “at home” one day.

Irving says “In my heart, I knew I always wanted to play at home. Home is where my heart is, and it’s always been there, simply because of such a great love that I have for my family and the way I grew up. I wouldn’t change anything about this journey at all, it’s brought me back here and that’s home. Home is where my family is, home is where I want my legacy to continue and I’m happy to be in Brooklyn.”

Irving also grew up a huge fan of the beloved Nets broadcaster Ian Eagle. In the Ain’t Hard to Tell Podcast, Eagle details a memory he has with Irving while he was stuck on an Amtrak with Irving and the entire 2016 Cavaliers team.

Irving says, “I grew up a huge Nets fan, I think you’re the best broadcaster in the NBA.”

Eagle then continues to discuss the genuine conversation he shared with Irving.

“Kyrie and I get into some deep Nets stuff, he’s asking me legitimate questions about the Jason Kidd, Vince Carter dynamic. Like a real true-blue Nets fan. This is not a nice narrative like ‘oh, he grew up in Jersey’, he’s the real thing.”

In such a short period of time, the Nets went from an afterthought to a free agent fantasy. That doesn’t happen without Irving wanting to play for the Nets and influencing his superstar teammate Kevin Durant to join him.

The Nets are now one of the most exciting teams to watch throughout the league, how far this team goes remains to be seen, but one thing is clear. Kyrie Irving is home, he is happy, and he is determined to play the best basketball of his career.

Maybe years down the line, after he announces his retirement, Irving will attend games at Barclays Center with the same enthusiasm and passion he had as the fourth-grader sitting in the nosebleeds of Continental Airlines Arena. For now, his story is still being written, and Irving is looking to do something, not even his childhood hero Jason Kidd was able to achieve, bringing the Brooklyn Nets their first championship in franchise history.