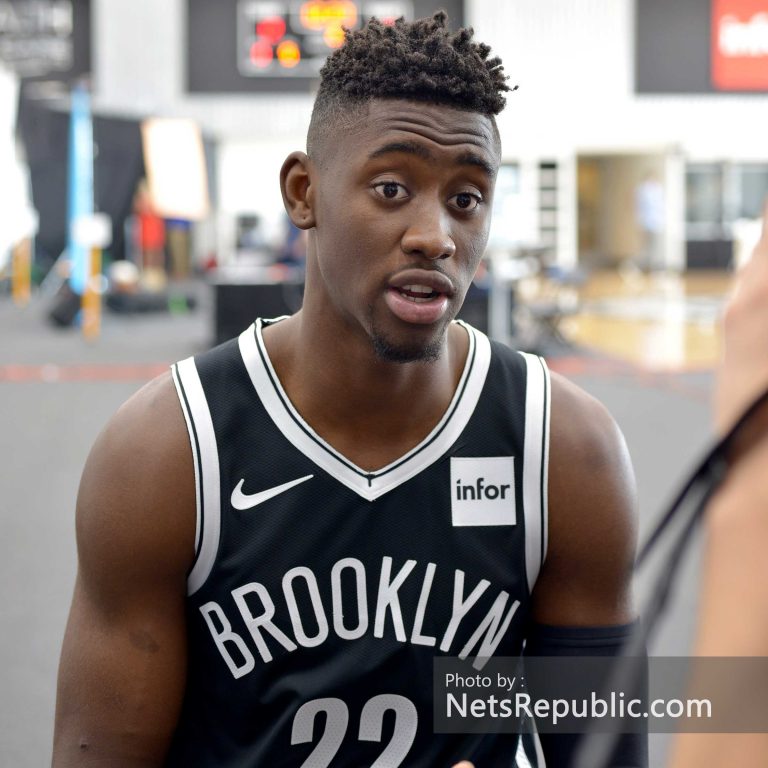 November 12th, 2018. The second half is winding down; the Nets will trail the Timberwolves by three heading into the break. With seconds left, Caris LeVert hustles back in transition, leaps for the block, and, snap. “Not again,” he must have thought.

At that moment, it seemed an untimely broken leg had ended LeVert’s ultra-promising 2019 campaign. In his third season with the Nets, LeVert stood at the forefront of the Most Improved Player conversation, posting impressive splits of 18.4 points, 3.7 assists, 4.3 rebounds and 1.2 steals per game. He finally seemed to have abandoned his cocoon and, subsequently, abandoned years of crippling injuries which set out to doom his career before it even started, including three foot surgeries in the span of 22 months in college. Tack on a brutal leg injury in November and the future looked bleak for LeVert.

Flash forward to April 13th, 2019. The second half is winding down and this time the Nets lead the 76ers by double digits in Game 1 of the first round of the NBA Playoffs. Caris Levert dribbles the ball up the floor. Rejecting a Jared Dudley screen with one smooth motion, he careens towards the lane. And then, this happens:

How did we get here? How on earth is a player whose foot went the wrong way on the hardwood five months ago dunking in the playoffs? LeVert turned a devastating injury into fuel for his fire and returned to the floor well before the playoffs even began. The story of Caris LeVert–from a grotesque injury to leading his team to an upset playoff victory–is nothing short of miraculous.

Against the 76ers in Game 1, Caris LeVert was the Nets’ best player. Among their trio of creators, D’Angelo Russell, Spencer Dinwiddie, and LeVert, he operates in a different way than what is expected. The Nets know what kind of offensive weapon they have in LeVert and unleashed him on the Sixers for 23 points, four boards, and two assists.

LeVert’s unique method of generating offense threw off Philadelphia’s defenders. Instead of winning with blinding quickness or powerful explosiveness, LeVert wins with rhythm, timing, footwork, craft, and deception. His attacks come at an off-beat tempo, a pace different than almost every other NBA player works at. His rhythmic onslaught is a rare breed in the league today (Shai Gilgeous-Alexander and future lottery pick Jarrett Culver share this trait with LeVert) and no Sixer defender could crack the puzzle of Caris LeVert’s offense. Running the pick and roll, LeVert hesitates and glances at the rim before exploding to the left. Instead of barreling to the cup, LeVert slows down, takes an extra dribble and takes advantage of the small J.J. Redick with a kiss off the glass:

Watch how Caris pauses for a beat after navigating the screen, coaxing Harris to hop on to his back. LeVert exploits the threat of the Jared Dudley pick and pop, busting out the half spin which confuses Tobias Harris and gives LeVert room to finish with the off-foot scoop layup. Watch how badly the half spin fools Joel Embiid, eliminating the threat of his rim protection, allowing for an easier finish for LeVert:

A quick snatchback dribble gives LeVert a sliver of daylight to get to the rim coming downhill. The ball fake makes the shot blocker back off of LeVert, leading him to dance with Jimmy Butler, unleashing pretty footwork. He just couldn’t finish the bunny:

Despite shooting 31.2 percent from deep in the regular season, LeVert caught fire from deep in Philly, draining all four of his three-point attempts. Here, Jonathon Simmons is able to stay connected to LeVert as he goes over the initial screen. To counter this, LeVert crosses behind his back, bamboozling Simmons and stepping into the wide open three. These type of pull-up threes warp the defense and open up avenues for the rest of the offense. If LeVert is consistently hitting these, his game elevates to an All-Star level:

His wonky, off-color drives force help rotations, as individual defenders struggle to handle him. He’s patient, taking an extra dribble so Embiid steps just a tad towards him, opening up a lob to Ed Davis:

Unlike Brooklyn’s other main creators, Caris LeVert helps Brooklyn out on defense due to his size, length and solid instincts. In order to limit the elite shooting of J.J. Redick, the Nets elected to employ an extreme top-lock strategy, meaning the defender would position himself between Redick and the ball. This way, he cannot get free for shots running off of screens and handoffs. Here, LeVert isn’t in a great stance, allowing Redick to cut backdoor. Quickly realizing his mistake, LeVert extends every inch of his 6’10” wingspan to deflect the pass and corral the steal:

Heading deeper into the series, the Nets look to put Philadelphia away and advance. That possibility feels real, as Kenny Atkinson has crafted a masterful gameplan to stymie the Sixers and Brooklyn executed flawlessly in Game 1. If the Nets want to pull the improbable upset and continue their storybook season, their best player, Caris LeVert, has to assert himself as such.