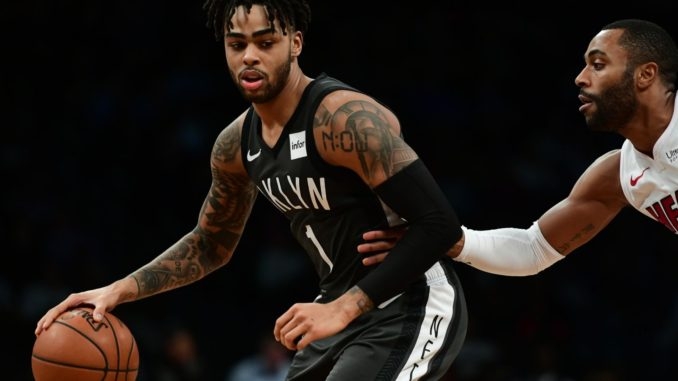 Thanks to a Jimmy Butler dagger, the Nets went 5 games behind .500 (8-13) as the Sixers downed them, 127-125. Brooklyn held a 13-point lead heading into the final quarter before being outscored 38-23 in the final period. The game wasn’t without its positives as they were some sensational performances from the backcourt. Here are some takeaways from the loss.

Spencer and D’Angelo Showed Out

Performances like this one are going to get D’Angelo Russell paid. He had his highest scoring outing (38 points) while also being only two rebounds and two assists from a lofty triple-double.

Russell was hitting everything, going 16/28 from the field. The surprising thing was the only hit two threes of his 16 made shots, as his coach commented on following the game.

“It’s just the contested ones that we have an issue with sometimes, but he’s like, ‘Coach, I want to be really good at that shot.’ I’m on board with that. But I also want him to embrace the three. He’s shooting 37 percent from the three. Last night, he mixed in some good attacks to the rim, but 11-for-15 from mid-range was pretty special.”

Spencer Dinwiddie was equally special with his 31 point night, shooting a ridiculously efficient 11-15 from the field.

The backcourt domination led to a historic night as was the first time in three years since two Nets players scored more than 30 points apiece in a game. Even though it came in a loss, it was still nothing but positive signs for the developing chemistry of Brooklyn’s two most important players right now.

Another Double-Double For Jarrett Allen

It may not have been his best performance of the season but sophomore center, Jarrett Allen, was still able to notch another double-double (17 points, 10 rebounds), his 7th of the season. Allen wasn’t able to affect the game in other ways as he didn’t notch a block, steal or assist, despite having 3 turnovers. Only 4 times this season has the 20-year-old failed to register a block in a game.

Joel Embiid still took the honors in the center matchup but the coaching staff and Allen himself should be buoyed by his performance. Embiid is playing at an All NBA level and would’ve had The ‘Fro in all sorts last season. His frame is still developing but the mentorship of Ed Davis and growing intelligence and savviness of Allen is having a noticeable on his game, as well as the teams.

The Problems Continue At The Power Forward Position

Rondae Hollis-Jefferson got the nod for the starting spot after some solid showings the past week or so, relegating Jared Dudley to the bench. Dudley has exceeded expectations so far but has started to wane in his production and energy. How long Hollis-Jefferson continues to hold that starting position remains to be seen as Atkinson discussed following the game.

“(It was) just a feel. And a little bit the matchups. Getting him and Simmons matched up, I thought that was important. It was more feel. I thought he played really well.”

RHJ was solid as he lodged 13 points and 6 rebounds, including nailing his second 3-pointer of the season. The long-term fit of Rondae remains murky. Carroll is still finding his feet and Dudley is a backup going forward.

Like most Nets fans, I advocate for more court time for rookie Rodions Kurucs. How it all plays out will be something to watch as the season unfolds.