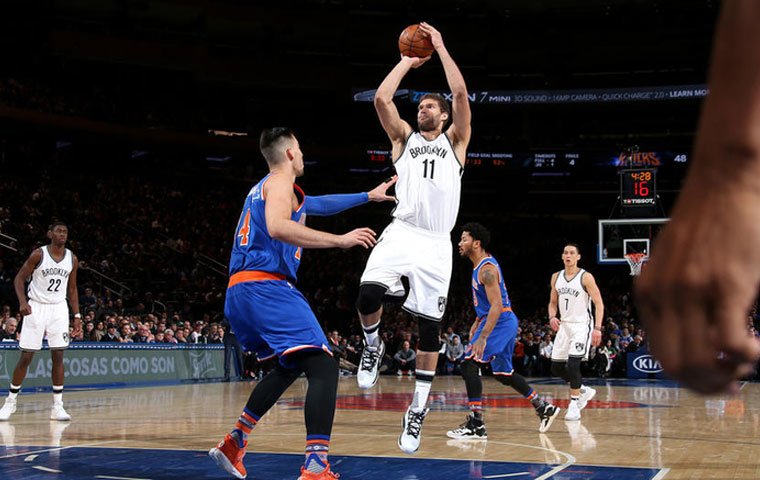 Last night the Brooklyn Nets were able to even the season series against their biggest rival, the New York Knicks. Brooklyn was able to turn their usual third quarter collapse into a third quarter run to come back and beat New York 121-110 in Madison Square Garden.

Looking at the box score, you wouldn’t think the Nets would’ve come out on top. They only shot 32 percent from deep, had only 19 assists, had almost twice as many turnovers as New York, and the bench only scored 39 points. That is not a winning formula for this Nets team but they were able to pull it out against a struggling, almost spiraling Knicks team.

This game was a perfect example of how Jeremy Lin impacts this team, that you shouldn’t give up on Rondae Hollis-Jefferson playing power forward just yet, that Brook Lopez is still one of the best post scores in the game, and Caris LeVert has Carmelo Anthony‘s number on defense.

Jeremy Lin Was The Catalyst For Brooklyn’s Offense

Last night against Derrick Rose and the Knicks Lin had 15 points, eight assists, four rebounds, and two steals while shooting five of sixteen from the floor in 29 minutes of action. He was the initiator of most scoring plays when he was on the floor, had only one turnover, and ended with a plus/minus of +14 on the night. He did struggle a little in the early second quarter and couldn’t find his stroke from behind the three point line, only going two of nine, but aside from that he was able to score or pass the ball wherever he wanted to.

When Lin is on the floor with this team, they are an entirely different unit. Statistically speaking, Lin’s insertion back into the lineup has made them more formidable but the the stats don’t show the whole picture. Its the little things he does, like communicated on defense or taking the time to go talk about something he saw in a previous possession during a dead ball. His leadership and inclusive personality is the glue that is preventing this rag-tag group of rookies, role players, and Brook Lopez from falling apart.

Every time Rondae Hollis-Jefferson looks like he maybe isn’t the best fit at power forward, he does something to prove doubters wrong. Last night against New York, he did just that by scoring 20 points and pulling down 10 rebounds on his way to dominating Lance Thomas the entire game.

Hollis-Jefferson went seven of eleven from the floor and a perfect six of six at the line. He didn’t just get it done with putbacks or dunks, he showed some nice touch on his jumper too. The fact that he went six for six from the free throw line is evidence enough that he doesn’t have an entirely busted shooting motion.

What the Nets need to do is get him working with the best shooting coaches around in order to finally iron out the rough edges in his shot that prevent him from being consistent or a threat from deep. Players can learn how to shoot, just look at Brook’s developments or someone like Blake Griffin from when he entered the league.

Hollis-Jefferson is one consistent jumper away from becoming a real problem for teams. He is already an accomplished defender, oozes athleticism, and plays with a lot of heart. Once the jumper is fixed, Brooklyn has themselves a nice piece going forward to aid in the rebuild.

With the emergence of his three point shot, it is easy to forget how dominant Brook can be in the post. Last night he reminded everyone what he was all about.

Brook had 24 points on nine of seventeen shooting from the floor, only four shot attempts and one make came from deep. He was matched up against Willy Hernangomez, who is not exactly a low post stopper. Despite playing well recently, Hernangomez has a long way to go before he can defend guys like Brook one on one. It was fun to watch Brook go to work like he used to before developing his three pointer and making his living outside the post.

These throwback games are a good reminder to everyone of how supremely talented Brook really is. People take him for granted because of his injury history and because of where this team is currently situated, but he is a highly skilled big that has flown under the radar in a big market for most of his career.

In the fourth quarter of their last meeting, Caris LeVert stuck to Melo like a decal on a seven year old MacBook. He was attached to Melo at the hip and helped shut him down in order for Brooklyn to win at home. Last night in Madison Square Garden, he did it for most of the game and it proved to be a difference maker.

Carmelo Anthony finished with 17 points on six of eighteen shooting in 36 minutes of action. No matter what he did, he couldn’t shake the rookie out of Michigan. LeVert did a good job of denying him the ball and not giving him any airspace whenever he released a shot. His long wingspan and quick feet help him keep even the most versatile scorers in front of him.

In addition to putting the clamps on Melo, LeVert also remained consistent on offense too. He ended with 13 points and seven rebounds while shooting five of nine from the floor. After starting the season injured, the rookie has come on in a major way. Kenny Atkinson made the right choice in starting him and Rondae Hollis-Jefferson together following the All-Star break.