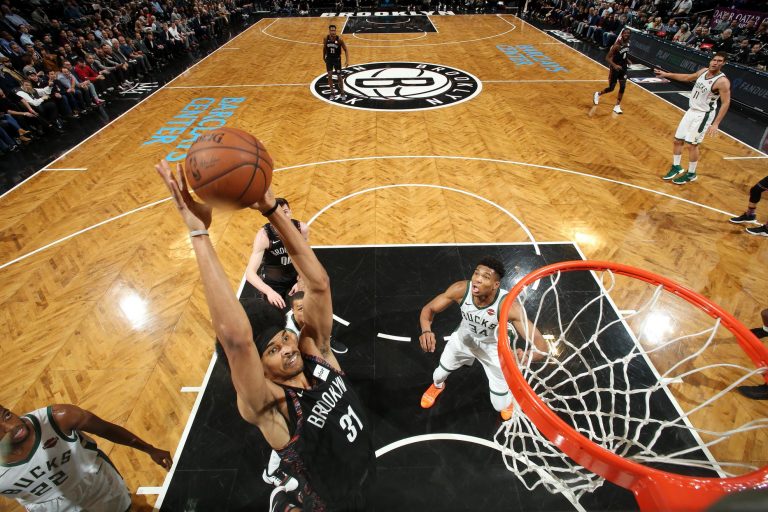 BROOKLYN, NY - FEBRUARY 4: Jarrett Allen #31 of the Brooklyn Nets dunks the ball against the Milwaukee Bucks on February 4, 2019 at Barclays Center in Brooklyn, New York. NOTE TO USER: User expressly acknowledges and agrees that, by downloading and or using this Photograph, user is consenting to the terms and conditions of the Getty Images License Agreement. Mandatory Copyright Notice: Copyright 2019 NBAE (Photo by Nathaniel S. Butler/NBAE via Getty Images)
Home
Brooklyn Nets
Justin Carter

The Brooklyn Nets hosted the Milwaukee Bucks on Monday, and maybe the best way to sum up the game is to tell you that the Nets were 0-for-11 from deep at one point. Maybe the other way is to tell you that Giannis Antetokounmpo had 30 points, 15 rebounds, and nine assists.

It wasn’t the night that Brooklyn wanted to have, and the 113-94 score almost feels closer than it should be. It was a rough, disjointed outing from the Nets.

It also shouldn’t come as too big of a surprise. Brooklyn has struggled without Spencer Dinwiddie available, and Monday added the complication of Joe Harris not being available as well. Harris, who will be in the NBA’s three-point contest during All-Star Weekend, gives Brooklyn an elite catch-and-shoot guy in the starting unit, and without him, this offense is left without enough to duel it out with a team as good as Milwaukee. Injuries hurt everyone, but Brooklyn is going through a really, really rough stretch in terms of injuries right now.

One thing is definitely for sure — Brooklyn does not want to slide down in the standings, because a playoff series matching these teams back up would be a worst-case scenario, even with a healthy Nets team. Dinwiddie and Caris LeVert make things closer, but I’m still not sure what this team can do against Giannis and company.

The Nets did show life, particularly in the second quarter, when they managed to cut the lead to single digits heading into the half, and the fourth quarter, when a game that was careening toward a 30-point loss turned into something that was at least competitive, with Brooklyn going on an 8-0 run at one point and getting the game back into the mid-teens before it, uhh, stopped being so close and headed the other direction. We did get to see Dzanan Musa in the game, and he looked pretty good, so maybe all isn’t quite lost?

Oh, and Brooklyn shot 5/42 from three on the night. You don’t win basketball games when you do a thing like that.

How The Stats Looked

Here are your statistical highlights and lowlights from Monday’s loss:

Jac’s going to have his film review of the game up soon, so I don’t want to get too filmy here, but let’s take a moment to be slightly happier and watch some of the good plays that Jarrett Allen made.

Here he is with a put-back slam over Giannis:

And here he is blocking Giannis:

Jarrett Allen is a blocking machine.

(This Shabazz Napier play was also good, even though his numbers on the night were not)

💥 @ShabazzNapier weaves through the lane and gets two off the high glass 💥 pic.twitter.com/uqCcV6vYdo

I’m linking the Twitter thread of all of my in-game notes here, in case anyone wants to revisit my live thoughts on things, though I have a feeling that no one wants to revisit this game. Still, it’s here as a document of the emotional ebbs and flows of an NBA game:

Hi, it's @juscarts. I'll be your host this evening as we venture into the wild & wonderful world of Bucks/Nets.

At least the next Nets game is easier!

Wait, you’re telling me they play the Nuggets on Wednesday? Oh boy…