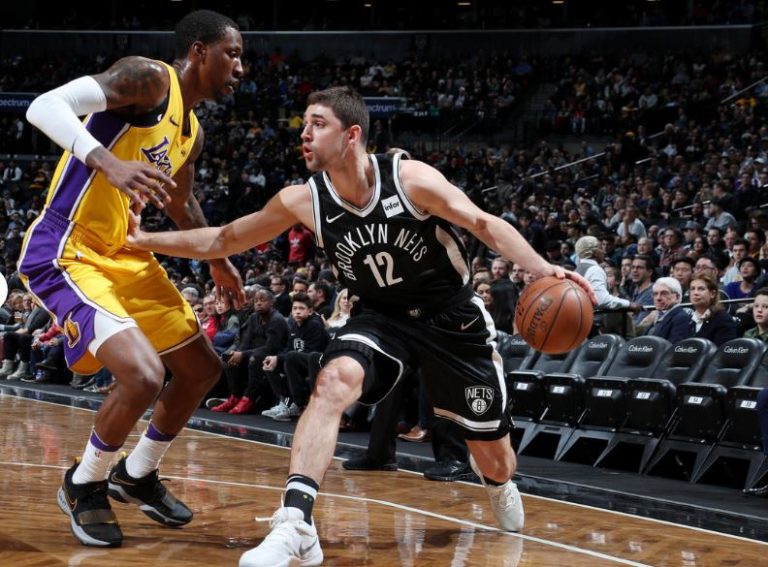 The Brooklyn Nets dropped a heartbreaker to the Los Angeles Lakers Friday night. In what was a back-and-forth contest, Brooklyn fell to the Lakers 102-99. Emotions were running high as the Nets’ all-time leading scorer Brook Lopez returned to the Barclays Center for the first time as a member of the opposing team.

Lopez impressed in his first game against the Nets in his career. The former Nets All-Star scored 19 points to go along with three rebounds and three blocks against his former team.

Brooklyn’s inability to convert in the fourth quarter was their ultimate undoing. The Nets were only able to muster up 14 fourth quarter points as the Nets’ wings went cold down the stretch. With the team down three with six seconds remaining, Joe Harris missed a potential game-tying three. The Nets fall to 19-34 with the loss.

Spencer Dinwiddie has not only become a feel-good story for the Brooklyn Nets, but he has become a league-wide sensation. Coming into this game, Dinwiddie held averages of 13 points, six assists and three rebounds per game after playing as a reserve for the majority of his career. Tonight, Dinwiddie posted a near-triple double, contributing 23 points, nine assists and seven rebounds.

Dinwiddie’s 14 third quarter points spurned a Nets run that kept Brooklyn competitive heading into the fourth quarter. In what has become a frustrating trend, Dinwiddie was met with plenty of physical contact on many of his drives only for there to be no foul called. Dinwiddie has been vocal about the lack of calls that have come Brooklyn’s way this season. The most egregious officiating error indirectly led to a Nets loss against the Thunder last week. A no-call on a push from Paul George allowed Russell Westbrook to win the game for Oklahoma City on a game-winning layup.

Though the NBA has failed to recognize many should-be fouls on Dinwiddie, it did recognize his talents when it announced that the Colorado product would be a participant in this year’s skills competition as part of NBA All-Star Weekend. Dinwiddie will return to his hometown of L.A. to represent Brooklyn during All-Star Weekend.

Jarrett Allen is for real

The Brooklyn Nets got it right with the 22nd pick of the 2017 NBA Draft. Jarrett Allen, in his third career start, had the best performance of his young career with another dominant night. The rookie scored a career high 20 points on 8-11 shooting from the field. He also shot 4-6 from the free throw line.

While the rookie leaves a bit to be desired with his rebounding, grabbing just five boards in 24 minutes, he held his own down low. Allen’s signature defensive play came in the fourth quarter as he swatted a Brook Lopez hook shot into the stands.

Allen wasn’t supposed to be a starter this season, with many projecting the Texas product to spend significant time in the G-League. Instead, Allen posted the most efficient month in Nets history in January. Allen posted a 72 percent field goal percentage and has started the last three games.

Brook Lopez was treated to a touching tribute and a warm reception from the Brooklyn Nets crowd at the Barclays Center. As fans remembered all of the contributions he gave to the franchise, Lopez showed that he can still produce at an elite level.

Though Lopez has seen his minutes fluctuate in his first season with the Lakers, he was a menacing presence on Friday night. Lopez knocked down 8-13 attempts from the field, tallying 19 points for his new team. More impressively, he shot 3-5 from the 3-point line. It was during Lopez’s last season with the Nets under Kenny Atkinson that he became a 3-point threat, shooting 35 percent for the year. Tonight, he showed his continued evolution as a stretch-five. Lopez hit several important shots in the fourth quarter to contribute to the Lakers victory.

While it will always be weird seeing Lopez in a different uniform, it is nice to see him thrive after the blockbuster trade that brought D’Angelo Russell to Brooklyn. Unfortunately for the Nets, Lopez had one of his best games this season Friday night.