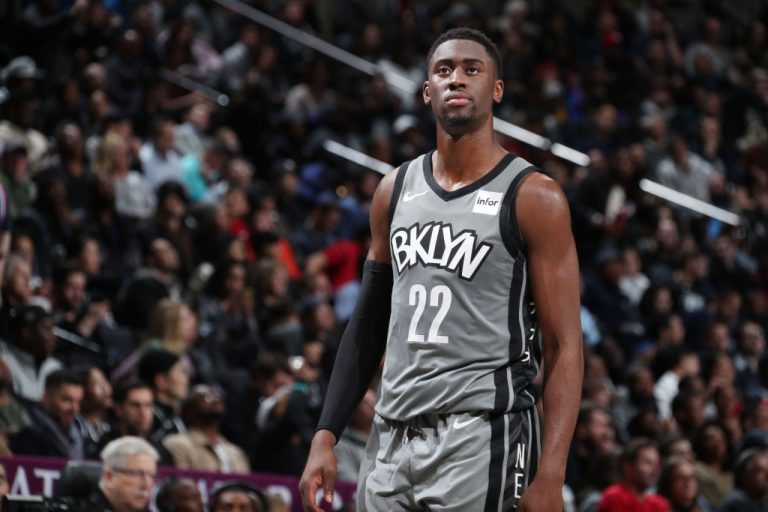 BROOKLYN, NY - NOVEMBER 4: Caris LeVert #22 of the Brooklyn Nets looks on during the game against the New Orleans Pelicans on November 4, 2019 at Barclays Center in Brooklyn, New York. NOTE TO USER: User expressly acknowledges and agrees that, by downloading and or using this Photograph, user is consenting to the terms and conditions of the Getty Images License Agreement. Mandatory Copyright Notice: Copyright 2019 NBAE (Photo by Nathaniel S. Butler/NBAE via Getty Images)
Home
Brooklyn Nets
Justin Thomas

Fresh off the Brooklyn Nets’ exhilarating win against the Pacers Monday night, the team entered Wednesday with an opportunity to not only head into the All-Star break with a win, but also a chance to take a game from the Toronto Raptors who have had their number all season and were on a 15-game winning streak. Entering this game the Nets had won their previous four home games by double digits.

In the 1st quarter, the Nets started off with good energy especially from Taurean Prince and Caris LeVert. At one point early in the 1st, Prince had a sequence where he hit a three, made a transition layup and then immediately drew a charge on the defensive end. LeVert was active as well as tallying four points, two assists and two steals in the opening frame. Kenny continued his Jekyll & Hyde use of the challenge as he used one with 4:54 remaining in the quarter to try and overturn an out of bounds call on Jarrett Allen. Both teams shot poorly throughout the quarter however as both shot under 36% from the field.

In the 2nd quarter, the offense started to pick up a tad for both teams as the scoring increased. LeVert continued his hot start and reeled off eight points in the quarter. Towards the end of the half, Brooklyn went on a 9-0 run to push their lead to double digits. Toronto would cut it to six before a Joe Harris 6-0 run put the Nets up 12 at the half. The most impressive thing about the first half was the defense from the Nets. They held Toronto to 35.6% shooting for the half and 22% from 3-point range. They also did a good job of keeping Pascal Siakam in check as he only had 10 points on 4/11 shooting.

The 3rd quarter has been a real make or break point in games for Brooklyn this season, especially if they’ve played well in the first half. Both teams started the second half slow however as neither team could muster a point for the first three minutes. Once the teams got back in the swing of things they would go back and forth exchanging buckets all quarter. Every time the Raptors would make a few buckets and seemed like they were building momentum, there was Brooklyn getting a timely basket from either Spencer Dinwiddie or Joe Harris. A Siakam three at the buzzer cut the Nets lead to ten and gave a little bit of a spark to Toronto.

The 4th quarter saw much of the same action as the 3rd, with both teams trading baskets throughout the period. Serge Ibaka nailed a three and Fred VanVleet converted on a 3-point play with 4:13 left which cut the Nets lead to single digits and got the Raptors fans, who had been pretty quiet most of the game, up out their seats. However, that jolt of energy was quickly snuffed out by a quick 4-0 spurt by LeVert. Toronto had ample opportunities to swing the tide of the game however their shots just didn’t fall. A late Joe Harris bomb from the corner with about two minutes left in the game sealed the deal for Brooklyn, thus ending Toronto’s 15-game winning streak.

Caris LeVert led the way for Brooklyn with 20 points, seven rebounds, four assist and four steals. Joe Harris poured in 19 points and Spencer Dinwiddie added 17 points himself along with nine assists. Jarrett Allen had himself a double-double with 10 points and 13 rebounds however he was no match for Serge Ibaka in the paint. Ibaka put up 28 points and nine rebounds while also shooting 5/10 from 3-point range. DeAndre Jordan, for the second straight game, was tasked with playing just about the entire 4th quarter and he did not disappoint.

Coming into the game the Raptors were averaging 121 ppg during their 15-game winning streak. Brooklyn surrendered only 91 points, 30 points lower than what Toronto had been averaging over the past month. They also held a high powered Raptors offense to 37% shooting from the field and 30% from deep. This was a much-needed win for the Nets who will enter the All-Star break winning four of their last five games. Knocking off two teams ahead of them in the standings all without Kyrie Irving who the team expects to return following the break. This win could be the groundwork to set up for a second-half push for the Nets.

And if you’re looking for some nice tidbits from the win. The victory over the Raptors ends the longest winning streak in Canadian sports history (15). It’s also the longest win streak snapped in Nets NBA franchise history and also snaps a 12-game losing vs NBA champions.