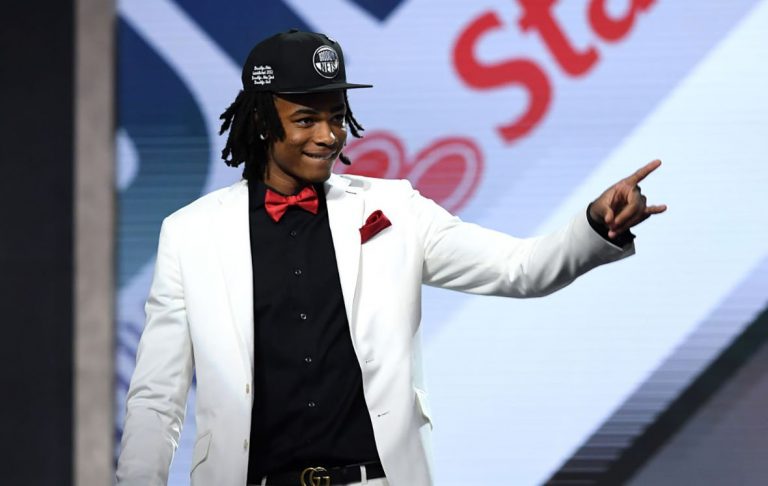 NEW YORK, NEW YORK - JUNE 20: Nicolas Claxton reacts after being drafted with the 31st overall pick by the Brooklyn Nets during the 2019 NBA Draft at the Barclays Center on June 20, 2019 in the Brooklyn borough of New York City. NOTE TO USER: User expressly acknowledges and agrees that, by downloading and or using this photograph, User is consenting to the terms and conditions of the Getty Images License Agreement. (Photo by Sarah Stier/Getty Images)
Home
Brooklyn Nets
Justin Carter

This week’s What We Learned About The Nets column is a day late, and it’s focusing on something that happened all the way back on Friday, but let’s ignore those two things and focus on one thing: the first game of rookie Nicolas Claxton’s NBA career.

DeAndre Jordan didn’t play on Friday with an ankle injury, which gave Claxton to chance to make his NBA debut.

I’m focusing on Claxton’s first game only, which means that Sunday’s loss to the Suns isn’t factoring in here. With things just not working for Brooklyn, Claxton played the entire fourth quarter and nothing else in the game, finishing four points, two rebounds, and two assists. It’s hard to know how a game with that kind of game flow for the Nets will matter in the long term usage of Claxton, so let’s push that discussion to the side for now.

So, let’s talk about some Nicolas Claxton.

With Jordan out, Claxton served as the primary backup center on Friday. He played 12 minutes, finishing with eight points and six rebounds. He looked just as spry and mobile as you’d expect from a center who sometimes initiated the offense in college.

Claxton has the ball at the top of the arc and then hands it off to Spencer Dinwiddie. Claxton also immediately moves to screen for Dinwiddie. When the Trail Blazers move to trap Dinwiddie out on the perimeter with Dinwiddie’s defender and Claxton’s defender, a lane is opened for Claxton to move out of the screen and into the roll. He gets the ball near the top of the key and his original defender is able to get back to him, which means Claxton has to put the ball on the floor and try to use some post moves to spin towards the basket. Anthony Tolliver tries to be a big body and disrupt things, but Claxton’s able to finish over him.

The other play I want to look at is this one:

(It’s a very small sample, but per Synergy’s playtype tracking, Claxton had seven offensive possessions in Friday’s game, with the vast majority of his usage coming in the pick-and-roll. That’s pretty par for the course for a Nets center with Kenny Atkinson as the coach, as this team requires its centers to be adept at screen setting and rolling. There’s a reason that DeAndre Jordan and Jarrett Allen both rank in the top-10 in the league in screen assists per game, and Claxton has to show that he can do that too if he’s going to get minutes. His per 36 minute screen assist numbers currently rank third on the team, so he’s definitely getting that kind of work in.)

Caris LeVert brings the ball up. Claxton’s positioned near the top of the arc. Unlike the previous play, Claxton’s doesn’t have the ball in his hands early in this play. They run a little Garrett Temple action that looks almost like a fake pick-and-roll — there’s probably a real term for it that I don’t know — as Temple comes out to the arc, contacts the defender, then cuts back to the basket. But the real play is the Claxton PNR, as Claxton comes over and frees LeVert up to drive. Claxton then rolls toward the basket, gets the ball tossed to him, and uses his momentum to get the layup.

This seems like a good way to use Claxton. I think he ultimately can become someone who is used in even more ways than this, but for now as he gets accustomed to the NBA game, let’s not change the offense completely when Claxton comes in.

Some Other Nets Thoughts

What else happened this week in Nets basketball?