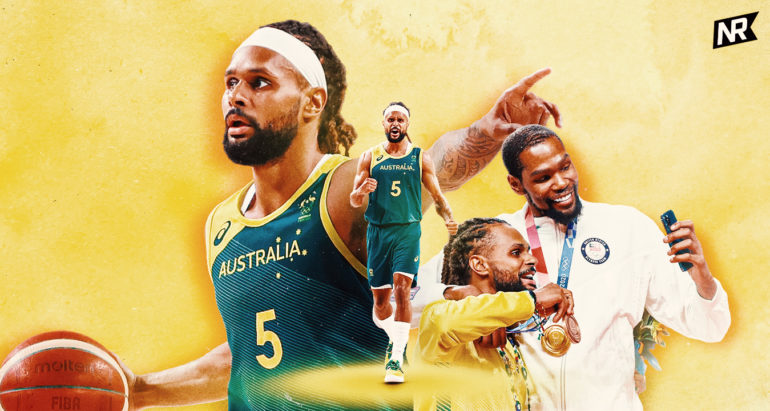 What Patty Mills Brings to Brooklyn

Patrick Sammie Mills is one of the most decorated athletes Australia has ever produced. The soon-to-be 33-year-old has represented the Australian national team since 2007, which includes leading the team at the Olympics four times and being the first Indigenous flag bearer at this year’s Tokyo games.

His NBA career spans 12 seasons in Portland and San Antonio, with a coveted NBA championship in 2014 for one of the most revered teams to accentuate his illustrious long-tenured career. Across those 12 years in the NBA, he has averaged a win percentage of 64.5 percent. To put this into perspective, Kevin Durant’s career winning percentage is 62.3 percent. The Nets didn’t just get a hooper, they got a winner.

Now after signing a two-year, $12 million contract, Mills is a Brooklyn Net. Here’s what the Indigenous Australian superstar can bring to the Nets franchise, both on and off the court.

Since the 2017-18 season, Mills has made over 150 threes per season, and in 2016-17, he was only three off that marker. Over that four-season period, his percentage from the perimeter was over 38 percent, striking when you note the difficulty of some of the shots he takes.

Very few players in the league have the ability to hit a shot like that. Let’s break it down: find space off the screen, move with pace to the perimeter, dribble and side step to the left, then hit the shot while Aron Baynes’ hand is in his face.

He is incredible at shooting off movement: if you give him a slither of space to get to the perimeter, he is going to punish the defense.

Not to mention that he becomes God-level when playing for the Boomers.

You can just imagine one of the stars hitting him for an outlet pass on the drive on the regular. Coach Nash is going to LOVE having a reliable and efficient shooter to provide extra space for the stars. While Tyler Johnson, Mike James, and Chris Chiozza were certainly credible in their roles last season, it can’t be underestimated what an upgrade it will be to have Mills in their place.

Mills is also incredibly adept at navigating screens and creating himself space to hit threes off the pull-up.

His tight handle and pure mechanics allow him to get his shot off with speed and fluidity.

As evidenced from his shot chart last season, it’s clear to see where his strengths lie as an offensive player—the man is lethal from three. Above the break, he shot a combined 130/361 (36 percent). To compare that with a player with a similar role, Jordan Clarkson shot 36.1 percent from the same areas on a total of 490 shots.

Mills’ assist numbers don’t scream elite playmaker, but his smarts and decision-making are an important part of his game.

There’s that sleek handle on display again as he uses it to fend away the defender and whip a pass with pace and precision to Devin Vassell.

Don’t tell me that athletes in their 30s don’t have speed. Despite Mills’ veteran status, he has great burst and quickness that puts immediate pressure on opposing defenses.

Here, he makes a quick drive off his opposite hand, and while he’s being forced out of bounds, he collapses the Nets’ defense, makes a smart read, finding the pass on his left as Luka Šamanić times a nice cut.

Mills is an ELITE free-throw shooter. Last season, he shot 91 percent from the charity stripe though only on 1.1 attempts per contest. With a career free-throw percentage of 85.8 percent, you can imagine Kyrie Irving will be very happy with that facet of Mills’ game.

Former Nets All-Star D’Angelo Russell recently recounted some of the distress Patty Mills gave him in his rookie season.

Russell isn’t the only one to have high praise and respect for the Aussie superstar. A man who’s notoriously hard to please, Spurs coach Gregg Popovich dished out the highest of praise to Mills last year.

“Patty is without doubt the spiritual leader of our team.He embodies empathy, awareness, the ability to be actionable after he speaks about things. He’s a very special human being.”

“On the court, off the court, just who [Mills] is as a person is incredible. I’ve had a lot of respect for him since my rookie year. How he welcomed me to the team, always lends out a hand in trying to help me. I’m happy to be friends with him. He’s a great person and he does great things for the community.”

Eubanks echoed the sentiments of Coach Pop, highlighting his leadership as a teammate.

“Off the court Patty for sure [has been a mentor]. Just having me bring energy, keeping me locked in, making me feel like I’m part of the family. Patty is always somebody I can go to.”

Patty Mills has done great things that extend beyond the basketball court. He’s endured his fair share of racism, but in spite of all, he remains a beacon of positivity, a figurehead, and role model for communities in Australia and the United States.

The only thing better than Mills’ on-court prowess is the person that he is off it. Last year, he launched his own foundation, Team Mills Foundation. The foundation was formed to support minority groups and underprivileged families. During the inception of the foundation, Mills reinforced the values he holds dear to himself.

“I play basketball, and I’m grateful for what the sport has provided me and my family, but I’m even more appreciative for the voice and platform that has come along with it. It has allowed me to follow through with my success on the court to inspire, support and make change in other people’s lives, especially the ones who need it most.”

A leader, a baller, a legend—Patty Mills is now a Net.