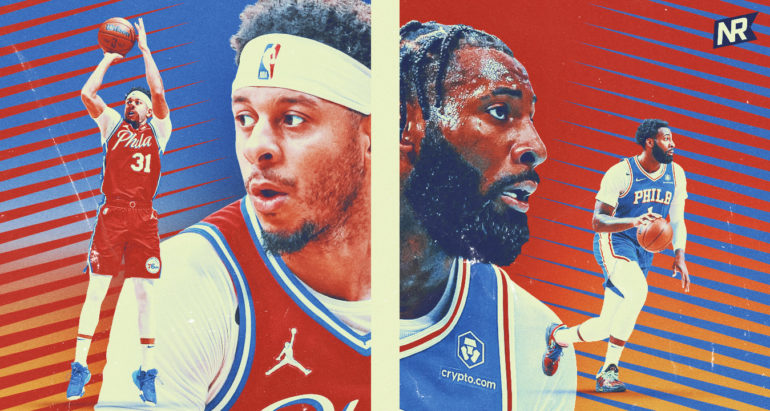 What Do Seth Curry and Andre Drummond Bring to the Brooklyn Nets?

This trade shakes things up for the Nets. They’re bringing in a new star in Simmons, whose playmaking and defensive versatility will be a plus for the team. The Nets also bring in more depth with Curry and Drummond, two players who were able to carve out valuable roles while on the 76ers.

Curry, 31, is a journeyman who served for numerous teams such as the Dallas Mavericks, Portland Trail Blazers, Sacramento Kings, and for the past two seasons, the Philadelphia 76ers. The undrafted guard was able to play a valuable role for the 76ers. Starting in 45 games this season, Curry averaged 15 points, 4 assists, and 3.4 rebounds on 48 percent from the field, 40 percent from three, and 87 percent from the free-throw line.

Curry played a vital role in the 76ers offense, operating in handoffs and working a two-man game with Joel Embiid. He also proved to be a spark plug that can heat up when in rhythm. Curry is a sharpshooter who can come off of pindowns to spot up for three or work off of handoffs. He has a smooth shot and is an efficient 43 percent three-point shooter in his career. Curry attempts 5.6 threes a game, 3.4 of those attempts comes in catch and shoot situations where he shoots it at 44 percent. In off the dribble pull-up situations, his three point shooting does dip as he shoots it at 34.7 percent on around two attempts a game. The Nets three point shooting this season has been inconsistent so adding a shooter like Curry should boost the Nets three point production. With the attention Kevin Durant and Kyrie Irving command, it should open up shots for Curry.

Curry is also a mid range threat and it serves to be his secondary point of attack on offense besides threes. Curry can work in pick and rolls, attack drop defenses with a pull-up mid range shot or show off his floater in the lane against the trees. According to cleaning the glass, Curry shoots 54 percent in the mid range, which ranks in the 97th percentile among combo guards. Curry also is a smooth finisher and can size up the defense or attack closeouts, get to the rim and finish with craft. He shoots 66 percent at the rim. This is an area he doesn’t look to attack as much but he does show capability.

Curry can also operate as a secondary ball-handler, who can create shots and make plays. It’s unknown if Curry will be starting or coming off the bench, but no matter what role he is in, he is capable of handling the ball and creating scoring opportunities.

Curry isn’t much to gloss at defensively. He can be inconsistent defending at the point of attack and being 6’2″, he gives up size as a shooting guard and doesn’t have the ability to guard multiple positions. But the Nets bring in an additional ball-handler, shooter, and shot creator.

Drummond is far off from his All-Star form but he does look to be a productive backup big man. The 28-year-old started his career with the Detroit Pistons. In the span of two years, he has been on the Cleveland Cavaliers, Los Angeles Lakers, and Philadelphia 76ers. Drummond was the backup for Joel Embiid and with his size, length, rebounding, and passing as a big man, he can give the Nets a boost at the center position.

This season, Drummond averages 6.1 points, 8.8 rebounds, and 2 assists on 53 percent field goal shooting and 51 percent from the free-throw line. The first thing that jumps out about Drummond is the rebounding, 8.8 boards in 18 minutes per game. He also grabs close to three offensive rebounds. Drummond has always been known for his ability to clean the glass and led the league in rebounding four times in his career. The Nets are a middle-of-the-pact team in terms of rebounding, something they need a boost in. Through the Nets’ 10 game losing streak, they have often found themselves losing the rebounding battle. Harden led the team in rebounds at eight a game.

Drummond gives the Nets more size inside at 6’10″, 279 lbs, he can match up with bigger and physical centers. He’s in a center rotation consisting of Nicolas Claxton and LaMarcus Aldridge. Aldridge is a guy who can provide floor spacing, Claxton is a lob threat and switchable on defense, and Drummond can be a drop coverage defender and passer out of the post for the team.

Drummond’s passing can be interesting for the Nets as he has decent vision and passing accuracy where he can work in delay actions, handling the ball at the top of the key, and find cutters. Drummond also shows the ability to pass out of the post and find shooters if the defense collapses on him. Drummond does average 1.6 turnovers and he can have some questionable moments when the ball is in his hands, forcing some rough passes and fumbling the ball when pressured.

Drummond doesn’t look to provide much on offense as his offensive game is limited to rim scoring, he doesn’t provide much shooting as a big either. His finishing at the rim has been underwhelming for a big especially since it’s his only area of attack. He shoots 61 percent at the rim, which ranks in the 21st percentile among bigs, according to Cleaning the Glass.

Defensively, Drummond can be an interior presence for the Nets and when guarding pick and rolls, he operates primarily as a drop coverage defender. Drummond doesn’t average a lot of blocks, 0.9 on the season, but his size and length are enough to bother shots at the rim.

The Nets gave up their best playmaker in Harden, but were able to get a young star in Simmons who compliments Irving and Durant as well as builds on their depth. It’s still unknown when Simmons will suit up for the team, but Curry and Drummond could make their debuts on Saturday when they face the Miami Heat on the road.