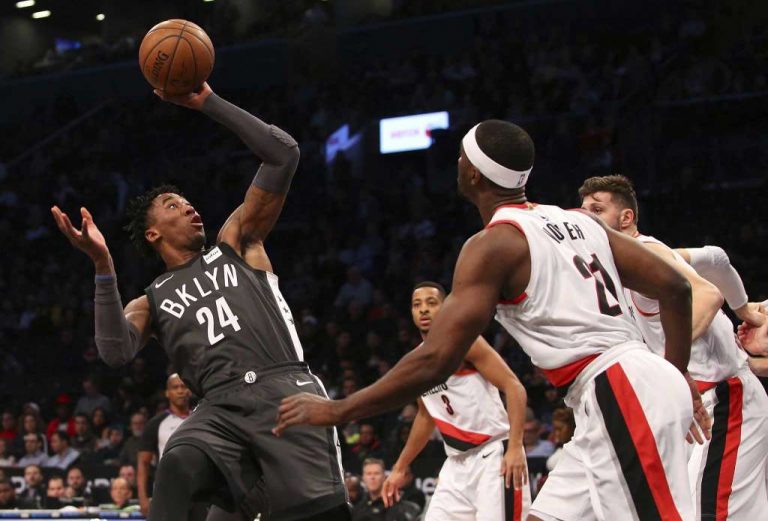 This post-Thanksgiving Nets-Blazers game might be the most evenly matched game played in the 2017-18 NBA season. Both teams shot 50 percent from the field, 40 percent from beyond the arc and 71.4 percent from the charity stripe. The slim edge Portland grasped for the 127-125 victory over the Brooklyn Nets came through getting to the foul line when necessary. Jusuf Nurkic and Damian Lillard each accrued over 10 free throw attempts. Now, it’s time for Brooklyn to go on a week-long Western Conference road trip and try to rectify this heartbreaker.

The Nets’ rotation of proletariat players cultivated by general manager Sean Marks rose to demonstrate a stellar egalitarian scoring load versus the Blazers. All 10 Nets who took the floor in the Friday game shot at least six field goal attempts, and eight Nets scored in double figures. Perhaps the egalitarian system dissolved a bit in the fourth quarter when Spencer Dinwiddie took 10 field goal attempts himself in the quarter. Despite Dinwiddie’s 23-4-6 statline and stellar overall play for this season, his repertoire still does not hint at reliable crunch-time scoring off difficult chances. Still, the majority of the game’s flowing offense, despite personnel limitations, should breed future encouragement in the Nets fanbase.

Caris LeVert looks so smooth and quick getting to the rim at times. Coach Atkinson may do better to emphasize even more LeVert as the primary ballhandler backing up Dinwiddie while D’Angelo Russell sits with injury. LeVert’s handle still remains shaky against set half-court defenses, and the Michigan product should absolutely be discouraged from attempting any pull-ups or floaters if he cannot get to the rim. However, no other Brooklyn offensive player can take the important shift from generating shots in the dead zone above the charge circle, to shots right at the rim like LeVert can. Plus, despite LeVert’s occasionally imprecise passing accuracy, he still has enough passing vision to maintain the ball movement Atkinson fetishizes. With LeVert regressing as a shooter right now, a heightened focus on slashing and dishing could revive the potential Nets fans saw in him in flashes last season.