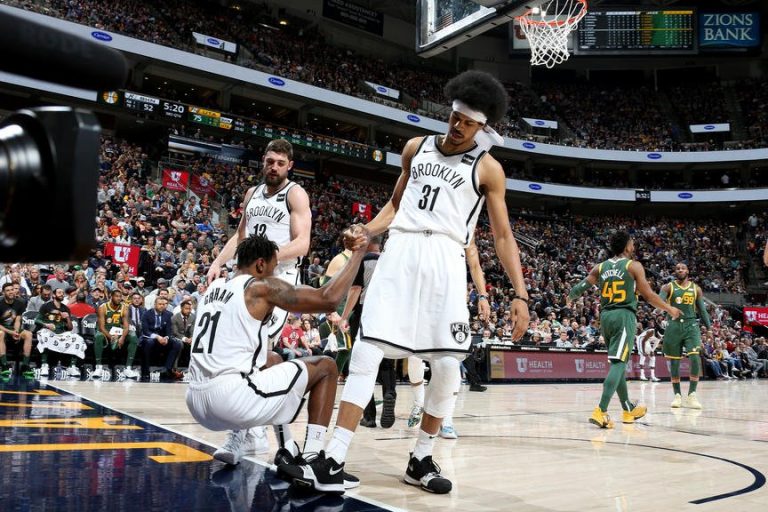 SALT LAKE CITY, UT - MARCH 16: Treveon Graham #21 of the Brooklyn Nets is helped up by his teammates during the game against the Utah Jazz on March 16, 2019 at vivint.SmartHome Arena in Salt Lake City, Utah. NOTE TO USER: User expressly acknowledges and agrees that, by downloading and or using this Photograph, User is consenting to the terms and conditions of the Getty Images License Agreement. Mandatory Copyright Notice: Copyright 2019 NBAE (Photo by Melissa Majchrzak/NBAE via Getty Images)
Home
Brooklyn Nets
John Pearson

The high-powered Brooklyn Nets offense took on the stout Utah Jazz defense in a clash of two different philosophies of basketball on Tuesday. The Brooklyn Nets started out with a disadvantage with guard Caris LeVert out with a thumb injury and replaced in the starting lineup by Garrett Temple. The Nets came in with the third-highest points per game average (119.8), while Utah allowed the fewest (98.1). After a dominating first half, the Nets gave a disappointing second-half effort, allowing Utah back into the game and losing the game to the Jazz 114-119.

The Nets started hot, disturbing the ball very well and finding the open man on most of their plays in the first. The offense was still high tempo, but instead of waiting for Kyrie Irving to do something spectacular, which he still did, Brooklyn played much more balanced.

The Jazz went out to a 7-0 run early in the second, getting Spencer Dinwiddie in foul trouble in the process. However, through the middle of the second, the Nets went on their on 7-0 run. The Jazz defense couldn’t seem to keep up with the Net’s quickness. While Brooklyn looked much better defensively, showing a refreshing amount of effort on both ends. Brooklyn shut the Jazz down from downtown as Utah went 1-13 from three at the half.

The first half was likely the best half of basketball from the Nets all season.

However, the second half was another story as the Jazz went on a 13-0 run. Guard Donovan Mitchell ended the quarter with 24 points. Quickly, we had a game again. The Jazz outscored the Nets 31-24 in the third to cut the lead to just eight. Brooklyn looked like a completely different team, losing some of the balance they had in the first.

The final quarter saw an unlikely duo getting hot as Guard Emmanuel Mudiay and Forward Jeff Green scored 19 points in the quarter. It once again came down to the final seconds and once again. Once again, the game falls through their fingers and add another loss.

The Nets travel to Denver on Thursday to take on the Nuggets.