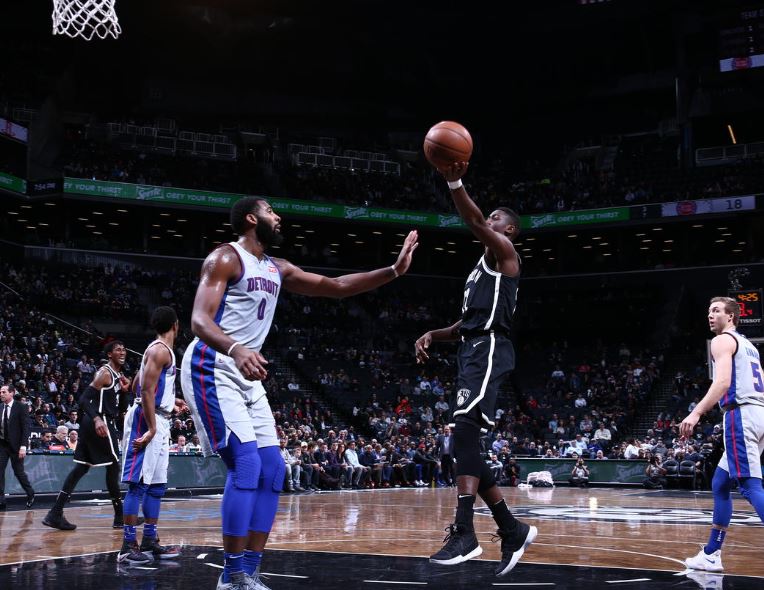 How To Net The Win: Brooklyn Nets at Detroit Pistons 2-7-18

Heading to Detroit the Brooklyn Nets are a little battle weary. Already playing without Rondae-Hollis Jefferson and Quincy Acy the team took a blow last night in the loss to the Rockets.  Or rather, Caris LeVert took a blow as Rockets big man Nene Hilario set a pick resulting in a body jarring, head snapping stop.

As Kenny Atkinson said afterwards “I think it moved all of us, I think we’re all affected, but we’re professionals and guys moved on, it’s just we obviously missed Caris the player.”

This because it was clear the injury happened because no teammate called out the pick – something teammates have to do, so these types of hits don’t occur. LeVert enters the concussion protocol program now and his presence will depend on his ability to pass the initial assessment. If he fails there is an entire procedure of stages LeVert will need to go through proving he can pass each one in a timed fashion before he can return to the court.

Although the trade deadline occurs tomorrow (Thursday, February 8 at 3:00 p.m.) these two squads got into the mix early. Rashad Vaughn was picked up (along with a second round pick) for Tyler Zeller and Sean Marks may not be done.

Clearly, the bigger move occurred between the Pistons and Clippers. LA parted ways with Chris Paul this past offseason, but seemed to be committed to building around Blake Griffin. The re-inking was a max deal over five-years for $173 million.

A rather daunting prospect considering how often Griffin gets injured or that the power forward will earn $38.9 million in 2021–2022.

Yet, some time in the six months since the Clippers decided battling just to make the postseason wasn’t worth their investment. The Clippers decided to start fresh and made the trade to rid themselves of Griffin.  The Pistons who are trying to put behinds in seats at their new arena jumped at the opportunity to trade for Griffin.  The only question remaining is whether LA will trade DeAndre Jordan prior to the deadline or just let him walk in the offseason.

Blake Griffin never saw the trade to the Pistons coming, learning about it on social media just like the fans did.

Detroit may potentially be the very best fit for Griffin. Afterall, Blake has spent copious seasons playing alongside DeAndre Jordan with success. Drummond may not provide the same rim protection as DJ, but his offensive arsenal is far greater.

Through the three games played this theory is proving to be true. In the games the duo patrolled the court together Drummond is averaging 18 points, 17.3 rebounds, three assists, 2.7 blocks and 2.7 steals. On the season Drummond is averaging 15 points, rebounds 15.4 and 3.8 assists. Most importantly however – the team is 3-0 in these games.

Meanwhile Griffin is averaging 20.3 points and 9.3 rebounds and 6 assists. Those numbers become all the more impressive considering his seasonal averages were in 22.4 points, 8.1 rebounds and 5.5 assists in LA.

Considering he’s new to Detroit and has a more talented front court partner the increased rebounds and assists are surprising.

Ultimately, it might not be Lob City, but this duo will be a handful presumably for the next five seasons. As far as this season goes with the loss of DeMarcus Cousins to injury this duo could assume that title of best frontcourt in the NBA.

Since the trade the Pistons have won three in a row including games versus the play off seeded Heat and Blazers. Both of those teams are on losing streaks, so it’s unclear how good this Pistons team truly is.

It will take time to determine whether the Pistons are functioning purely on adrenalin or the fit is as perfect as it seems. And, until Reggie Jackson returns to see what the chemistry between the trio will be like among the trio.

In the interim Stanley Johnson is the early benefactor (aside from Drummond) and looking much more like the player analysts expected to see on the hard court after his rookie season.

Heading into the match tonight the Brooklyn Nets are on a three game losing streak, have lost seven of eight and are on the second night of a back to back. Factor in the team could be without Jefferson, Acy and LeVert.

Hey, everyone figured the Rockets would blow the Nets off the court, but they made a solid effort pushing the Rockets to make it interesting. right to the end. The fact James Harden had to return in the final frame speaks to this.

DeMarre Carroll was impressive leading the Nets scoring with 21 points and connecting on 5 of 8 from deep. Likewise Spencer Dinwiddie continued to be the captain on the floor scoring 18 points and also being adept from the perimeter hitting 5 of 7 deep shots and added nine assists.  The Pistons were the team who drafted Dinwiddie, but seemingly gave up on him so there will be extra motivation for the guard to remind them of what they lost.

In addition, almost every projected trade for Brooklyn (including our own) presume Dinwiddie is the asset likely to draw the most value. Whether Dinwiddie is fully cognizant of articles of this nature or not, he certainly isn’t playing like he’s concerned.

History: This is the third game of the 2017-18 campaign with the teams splitting the previous two games. Last year the Brooklyn Nets took the season series winning two of the three games. All-Time the Pistons hold the edge having won 104 of the total 173 contests.

Odds: Not surprisingly the Pistons are the favorites given they are rested and on a win streak. Moreover, with the Brooklyn Nets on a back to back and missing core producers potentially it bodes well for the home squad. Oddsmakers favor the Pistons by 9.5 points with an over/under of 208 points.