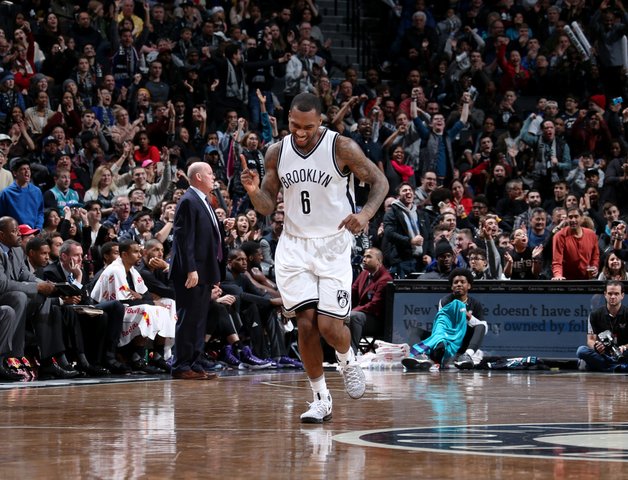 BROOKLYN, NY - December 26: Sean Kilpatrick #6 of the Brooklyn Nets reacts during a game between the Charlotte Hornets and the Brooklyn Nets on December 26, 2016 at Barclays Center in Brooklyn, NY. NOTE TO USER: User expressly acknowledges and agrees that, by downloading and/or using this Photograph, user is consenting to the terms and conditions of the Getty Images License Agreement. Mandatory Copyright Notice: Copyright 2016 NBAE (Photo by Nathaniel S. Butler/NBAE via Getty Images)
Home
Brooklyn Nets
Nicholas LeTourneau

The eighth victory of the year came via some last second heroics by Randy Foye, but the moment was bittersweet following the news that Jeremy Lin had aggravated the left hamstring injury that kept him sidelined for five weeks this season.

Randy Foye only took one other shot all game before nailing this buzzer beater to give the #Nets their eight win on the year (via @3ball_) pic.twitter.com/iBH3j3b8yl

A victory over the Charlotte Hornets is nothing to overlook, especially given their place in the East and the play of possible All-Star guard Kemba Walker. Big nights from Sean Kilpatrick, Brook Lopez, Bojan Bogdanovic, and Lin before his injury were enough to keep them in the game leading up to Foye’s buzzer beater.

The offense was firing on all cylinders, scoring 120 points against one of the better defenses in the league, but the defense was at its usual level as they gave up 118 points. The loss of Lin makes talking about anything else in the game seem a little pointless, but there are a lot of good things to take away from this victory.

Bogdanovic reminded everyone why he was on the roster

Few things have been more disappointing to start this season than Bogdanovic’s slump. Coming off of a hot Olympic games where he looked like one of the best scorers on the planet, his performance so far has been a letdown. Against Charlotte, he looked like his old self.

Coming off the bench, he netted 26 points on four of seven from deep and seven of eleven overall. He scored a point a minute and played a key role in getting the Nets back into this game after Charlotte’s third quarter lead was extended to 14 points. There was nothing fantastic about how he got to 26 points, as his looks usually came within the flow of the offense. Really the only thing that was different than most games was that the shots were falling.

This shot went under the radar to me. Such a clutch shot by Bojan with Batum right in his face, just as important as the buzzer beater #Nets pic.twitter.com/87ZwqJVsuB

He looked supremely confident and you could tell that as the shots kept falling his confidence only grew. If Lin is going to miss extended time with his hamstring again, Bogdanovic will need to play at this level. The team needs its best players to start taking over, and he is high on that list. He is extremely skilled and very serviceable as a scorer, he can average 18+ points in his sleep. Its time he starts doing so.

Jeremy Lin made a big impact in just 22 minutes

It stings to type this, because thinking about him not leading this team for another five weeks is a scary thought. When he went to the locker room following a sequence that looked almost exactly like his original injury, everyone was sent into a panic. Lin was only on the floor for 22 minutes before he went down, but in that time he scored 17 points on six of eleven shooting to go with four assists and two steals.

Lin was at his best when pulling up for jumpers, something he is not known for. He is usually at his best when driving the lane and using picks to create enough space to dart by, but on Monday he was really feeling his jumper. Of his six shot attempts, four were jumpers and two were from deep. He also had two steals and created for his teammates. Its tough to predict how a player would finish a game that he didn’t, but Lin could’ve easily finished with 20+ points and seven or eight assists if he didn’t get injured.

Going through Lin’s performance on Monday on @3ball_ and I couldn’t help sharing this pull up three in transition #BrooklynGrit pic.twitter.com/LuzQlZz34x

The Brook-Lin connection was firing on all cylinders last night. Love the patience from Lin to wait for Lopez to be in the best spot #Nets pic.twitter.com/NoSFCc6XiH

There is no word yet on how bad the injury is or how long he will be gone, but the team should make an announcement sometime before Wednesday’s matchup with the Chicago Bulls. He did not limp to the locker room, but he did not limp following his last injury either. Hopefully he won’t miss more than a couple games, but if he is scheduled to miss five+ weeks again, look for the team to make a move for a point guard.

Seeing players succeed from the D-League is something that will be happening more and more often, but Sean Kilpatrick is emerging as one of the best scorers to ever come out of the development league. He has shown this season that he belongs in the NBA and can be relied upon as a leader and main scorer of the bench unit.  As a starter last night, he finished with 23 points on nine of fifteen shooting from the floor to go with his four assists and five rebounds.

Id put @SeanKilpatrick up one on one against almost anyone in the NBA. Love how he broke down MKG/Williams for the pull up J (via @3ball_) pic.twitter.com/uZOO81pC9m

Great steal by Lin leads to a good look in the paint for Sean Kilpatrick. Too bad we probably won’t see this again soon (via .@3ball_) pic.twitter.com/FUmQ4Qn33F

He was able to catch fire from three, nailing four of seven just like Bogdanovic. Unlike Bojan, Kilpatrick isn’t known to be a sharpshooter, but on Monday he played a big role in getting the victory thanks to his long range shooting. He was also able to dominate Charlotte with his cuts to the basket, as every make that wasn’t a three came from driving the lane or cutting.

Scooping Kilpatrick up out of the D-League before another team did was without a doubt one of the best things Sean Marks has done in his short time as GM. Hopefully Brooklyn turns into a long term home for him, because not only do the fans love him but he is the embodiment of #BrooklynGrit.