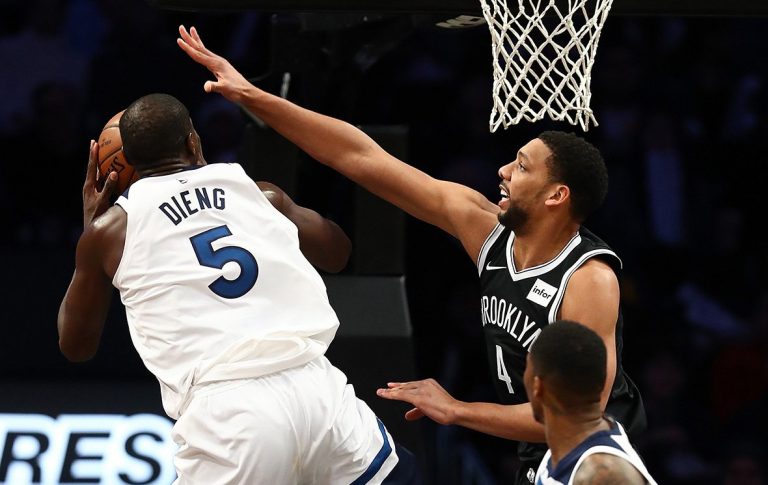 NEW YORK, NY - JANUARY 03: Jahlil Okafor #4 of the Brooklyn Nets attempts to block a shot by Gorgui Dieng #5 of the Minnesota Timberwolves during their game at Barclays Center on January 3, 2018 in New York City. User expressly acknowledges and agrees that, by downloading and/or using this Photograph, user is consenting to the terms and conditions of the Getty Images License Agreement. (Photo by Al Bello/Getty Images)
Home
Brooklyn Nets
Noah Schulte

Despite the fact that the Nets are in desperate need of frontcourt depth, their two highest paid centers are consistently failing to prove themselves to be more than low-end bench players. Here’s why:

And here we go again. The last time we evaluated the Russian center at a landmark point in the season, I said that:

At this point in his career, any production Mozgov can provide is a bonus. Old, plodding, centers like Mozgov who can’t shoot from the perimeter or defend the rim adequately don’t have much value (if any at all) in the modern NBA, and the Nets have felt that

So what’s changed since then? Well, not much really.

Mozgov continues to be one of the least valuable players in the entire NBA, and thankfully the Nets treat him as such. He’s played in seven games since his mid-season evaluation, never logging more than ten minutes in any of them. His worth to the team still lies strictly in his contract, and the on-court production has been nearly non-existent.

His season can be summed up in one sentence; he’d have immense value if the Nets were tanking but unfortunately, they’re not.

It’s a damn shame that Jahlil Okafor didn’t come around before the pace-and-space era. Had he come around just ten years earlier, he could have dominated the grinding, iso-centric game which defined the NBA in the mid-2000’s, when his stellar post game was en vogue. But unfortunately, we have to evaluate him through the lens of basketball in 2018. And honestly, he’s not doing so well.

Because of his outmoded style and the pressure he puts on a team to comply with his game, it’s not surprising that the complexion of the Nets’ offense radically changes whenever he plays. Whereas the Nets spent most of the year pushing the pace whenever possible and instilling an ultra-modern system, Okafor’s weaknesses forced the Nets to completely abandon their game-plan in favor of forcing the ball into the low-post which dragged their pace down by nearly five possessions per game.

Sure, slowing the game to a crawl to allow a skilled low-post player to feast on bench units is becoming more commonplace in the NBA, but Okafor was neither efficient enough nor good enough defensively to justify such a fundamental shift in offensive mentality.

When he played this year, the team boasted a disgustingly low 93.7 net rating which doesn’t come close to making his trouble worth the Nets’ while. Moreover, he averaged a troublingly low 1.2 assists per-36 minutes played which illustrates Jahlil Okafor as a black hole with the ball.

Jahlil Okafor’s offensive season begs the question; if a player’s signature skill isn’t good enough to justify playing him, why is he in the NBA?

Even if Okafor didn’t actively hurt the Nets on offense, his play on the other side of the court would give any team pause about playing him at all. He’s consistently out of position, in a poor stance, or just shows a complete disinterest in what amounts to 50 percent of the game, all of which contributes to a head-spinning 116.7 defensive rating.

Just watch in the clip below from last year:

He fails to drop into an advantageous defensive stance to cut off the drive from Goran Dragic. He then drops back far too low and doesn’t even make an effort to contest the floater nor fight for the rebound after the miss. And finally loses his man and allows Hassan Whiteside to get off a completely uncontested push shot.

Sure that was last year and he’s grown slightly since then, but those types of plays happen far too frequently for Jahlil Okafor to justify his scheme-changing offense, let alone playing time.

At 23 years old Jahlil Okafor theoretically has enough potential for a team to be willing to gamble on. That said, his free agency prospects look bleak this summer. While the Nets could re-sign him to a bargain contract, his significantly decreased playing time doesn’t point to a prolonged future with the team.

As for his other options around the league, there aren’t many teams who’d likely be interested. Okafor is a center with an outdated skillset who’s shown little ability to adapt to the modern NBA and negatively impacts both sides of the ball. Maybe a team with no urgent need to win and cap space like the Phoenix Suns or the Orlando Magic could gamble on him as the anchor of a bench unit. Still, at this point even those possibilities seem far-fetched.

Think of his free agency like you would purchasing a brand-new VCR; there’s a chance you’ll be able to use it at some point and if it were 20 years earlier you would have been all over it, but you know that it doesn’t really have a practical use in 2018 and there are better options on the market.

Defense, both effort level and IQ