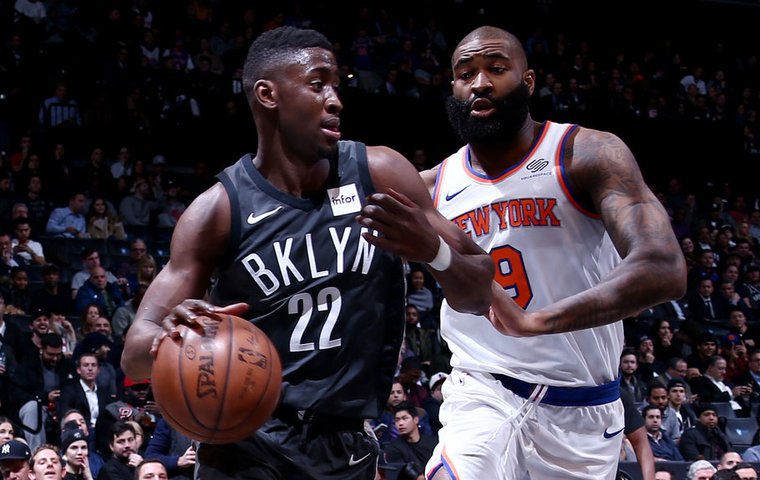 The Nets’ run-and-gun offensive scheme is an effective one if it’s working. Thursday’s game was not one of those nights.

A terrible first half saw the Knicks take a 63-50 lead on the back of Kristaps Porzingis‘ 13 points. The Knicks came to the Barclays Center with more energy, hustle and defensive intensity regularly, beating the Nets to loose balls early on. It didn’t help that the Nets shot just 43 percent from the field and 25 percent from three, but there was a distinct lack of aggression.

Coming out of halftime, the Nets were a different team. Using a 27-10 third quarter blitz, Brooklyn managed to turn a 13-point deficit to a four-point lead. DeMarre Carroll, Allen Crabbe and Spencer Dinwiddie all hit three pointers in that stretch, with the Nets shooting a hot 73 percent (8-of-11) in that span. The Knickerbockers would respond with a 14-5 run and head into the fourth with a 87-82 lead.

Both teams traded buckets for the first six minutes until defenses began to tighten. Trailing 95-92 with 5:22 left to go, two turnovers by center Tyler Zeller and shooting guard Caris LeVert resulted in a Courtney Lee reverse layup and three-pointer in transition. A three-point play by Dinwiddie and a Carroll outback cut the lead back to three, but a triple from rookie Frank Ntilikina sucked the air out of the building. The Nets missed their next six shots before a three-point bomb from forward Lance Thomas effectively ended the game.

Dinwiddie paced the Nets with a career-high 26 points (9-of-17 on field goals, 4-of-11 on three pointers, 4-of-5 on free throws), seven rebounds and seven assists. Rondae Hollis-Jefferson also finished with a career-high 25 points (10-of-16 from the field, 5-of-7 from the free throw line), seven rebounds, three assists, four steals and two blocks. The Knicks were paced by guard Courtney Lee’s 23 points (9-of-17 on field goals, 3-of-4 from three, 6-of-6 on free throws).

The Good: Development of Rondae Hollis-Jefferson

Hollis-Jefferson is becoming the go-to guy in clutch situations. The defensive ace has been impressive in pressure situations, mixing his offense between driving to the bucket and hitting tough fadeaway jumpers. His three-point stroke continues to be problematic, however.

With his length and athletic ability, he could be Brooklyn’s guy in crunch time. He is still a little raw and does drive uncontrollably at times, but he isn’t afraid of the moment. He is a legitimate “three-and-D” small forward, and his development is exciting for Nets fans.

The Bad: Playing Without a Legitimate Point Guard in the Second Unit

LeVert is a wonderful player and has made terrific strides in his second season, but no point guard. The Nets are trying to run the second unit without a point guard, and it’s yielding mixed results. LeVert is a scorer and has yet to master the specifics of the position.

On two separate occasions, center Timofey Mozgov was called for moving screens because the big man was not in position before LeVert attacked the basket. Small turnovers are crucial in tight games. Brooklyn has deployed Crabbe in the same role, but he is a spot-up shooter. The Nets’ second unit is ranked third in the league in scoring but would be even better with a legitimate floor general.

The Brooklyn Nets are second in the league in three-point attempts (34.2) but are 28th in three-point percentage (34.2 percent). While space and pace is aesthetically pleasing and meets the “playing the right way” narrative, sometimes the team has to play to its personnel.

Jacking up more threes does result in more made triples by law of averages, but also means more empty possessions. This is the second straight game the Nets have failed to shoot better than 30 percent. If this strategy is going to be successful, choosing their spots and shooting less triples may be a better option.