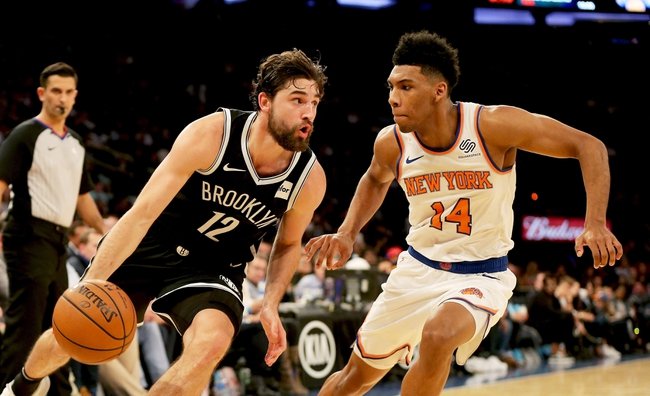 It was yet another respectable loss for the Brooklyn Nets in their opener against the Detroit Pistons. Despite the loss, there were more positive signs than negative ones. Caris LeVert was sublime, Spencer Dinwiddie was awesome off the bench and Jarrett Allen continues his rise up the ranks.

There were many things that went right for the Nets, just not enough to get the all-important win. The poor play in terms of turnovers and perimeter field goal percentage were just too much to overcome. Andre Drummond and Blake Griffin were the catalysts for Detroit and things won’t get any easier when they take on New York on Friday. Here are a few things to watch for as they battle again, this time in regular season action.

D’Lo was notably benched for a large portion of the second half against the Pistons. He didn’t have a great outing which forced Atkinson to turn to LeVert and Dinwiddie. Expect Russell to see some more time against the Knicks as the coach told reporters following the game.

“Listen, I think we’ve got a lot of good point guards, two guards, perimeter guys and there’s only so many minutes. I can guarantee you that, in two games, it’s going to be probably flipped around. D’Angelo is going to have the great game. We’ve got to do it on a game-to-game basis and work it out that way.”

With Crabbe set to return very soon the minutes glut in the backcourt will only increase. There were plenty of occasions (including in the final preseason game against the Knicks) where all three of LeVert, Dinwiddie, and Russell will be out there together. It’s about finding the right mix at the right time.

For Atkinson, things will only get tougher as Shabazz Napier continues his recovery from injury. It’s a much better problem to have than last season where the depth of talent was much barer in comparison.

While the Nets lost the battle on the glass against Detroit, they were only outrebounded by three boards overall (54-51). Where they were really bullied was on the offensive glass. They lost that 14 to 5, with Andre Drummond beating the whole Nets squad by grabbing 9 of his own.

It’s not as if the Nets lack rebounding talent. Ed Davis is one of the best rebounders in the game and Kenneth Faried (who didn’t see any court time against Detroit) provides insatiable energy off the glass. Perhaps some of the extra minutes Dudley played could be dispersed more between those two.

Atkinson should also look to experiment with having both Allen and Davis out there at the same time, as we advocated for on the Brooklyn Buzz.

It doesn’t have to be for large portions of the game but with Allen showing growth in his 3-point shot, it’s not as if he’s a liability from the perimeter. They’ll have their hands full against Enes Kanter and the coach and his troops better be prepared.

They’re two facets of the game that will be a long to determining how well the Nets perform this season. Any game where you have 17 turnovers and shoot 18.5% from the arc is one that will be incredibly tough to win. It speaks volumes that Brooklyn was in the game for so long despite those factors.

The eventual return of Crabbe not only heaps the team numbers overall but also his teammates. The gravity Crabbe draws from defenses allows guys like Joe Harris to find their range a lot more easily. You won’t see many nights where Jarrett Allen (2/3) is the best shooter for the team. Dudley needs to make his shots from the arc to not be a liability on the floor. Leadership and IQ only bring you so much on the floor.

Dinwiddie uncharacteristically led the team in turnovers with 4 against the Pistons. LeVert had 3 himself while Harris, Allen, Russell, and Davis all had 2 a piece. It wasn’t the worst night for Brooklyn as Detroit actually had 2 more total turnovers than they did (19-17) and the Nets were able to capitalize on that, scoring 26 points off their turnovers. The Nets will continue to push the pace all season and if they can limit their turnover numbers to around the 13-14 per game range they’ll have a greater chance at victory more often than not.