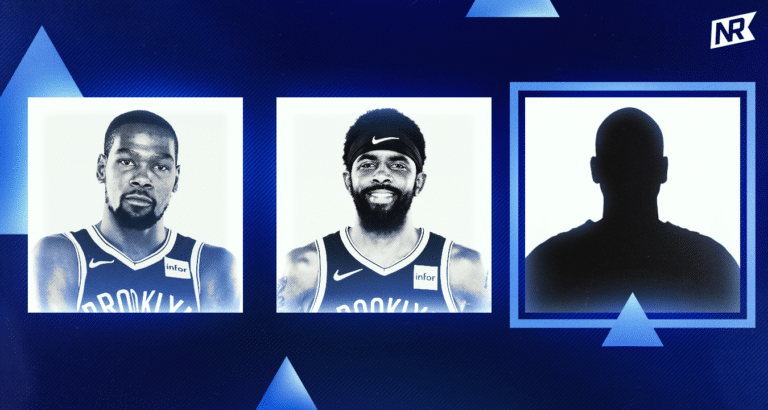 Who Is the Brooklyn Nets’ Third-Best Player?

Say what you want about the overall state of today’s NBA but in this year’s Eastern Conference, the road to a title will hinge on every team’s third-best player. Right now, that’s just one of the many questions surrounding the new-look Brooklyn Nets. Irving and Durant will undoubtedly lead the charge, but who is the “three” in “big three?”

Beyond their two superstars, what you’ve got is a cluster of players sitting in the league’s most deadly grey area: between role player and stardom, bench scoring punch or all-star, alpha or beta, etc. Spencer Dinwiddie, Joe Harris, and Caris LeVert all have cases in being named the Brooklyn Nets’ third-best player. As this team prepares to make a highly anticipated run at a championship, this question alone may prove the end-all in what is their most inhibiting of limitations.

It’s not a problem easily solved either, especially not now, just days ahead of the season opener. Whatever energy isn’t spent on reviving the career arcs of Durant and Irving this year will be spent trying to birth a new one: that of a potential all-star, a prospective key cog in a run at a title, and ultimately the third-best player on this Nets’ team. It may seem as if I’m exaggerating what many would consider a finer print issue, but think of the responsibility that comes with playing third fiddle on this team.

Irving played just 20 games last year, and Durant as most know played none. These guys are all-but-guaranteed to miss a sizable number of the 72-regular season games for load management and rehabilitation purposes. Brooklyn’s done a good job at providing them with a proper supporting cast, but who among them will take the initiative and carry the team in those games without their stars?

Most importantly, however, is the currently anonymous player’s fit on the floor next to Irving and Durant. Any third-best player on this Brooklyn team will be among the five players closing games out in the playoffs, and potentially, the 2021 NBA Finals. It’s a hard ask, a tall order, and a mountain that’ll require some proper footgear — but someone’s going to have to step up and fill those muddy boots.

The easiest and most obvious argument for the Brooklyn Nets’ third-best player starts with Caris LeVert. But the guard is already 26 years old, a mark that most hit without ever reaching the next level in their careers. And there isn’t anything wrong with that, given what LeVert is already capable of today. Nothing about averages of 18.7 points, 4.4 assists, and 4.2 rebounds is disappointing, hell, only 25 of over 400 players reached those numbers last season. But among all of them, only Karl-Anthony Towns played fewer games than LeVert, who also notably finished dead last in win shares on that list, courtesy of Basketball-Reference.

We all know that win shares aren’t the fairest statistic in basketball, and an argument based on pure numbers will get you as far as I could throw DeAndre Jordan. But as we survey equations that include variables from off the court, we’ve got to put a certain amount of trust in those that pertain to the on-court endeavors. LeVert played next to a wide range of talent in the absence of Irving last year, but how is he going to adapt to playing next to two alpha talents (and personalities) for the first time in his four-year career?

And Brooklyn didn’t necessarily descend into the abyss of irrelevance in his absence last year either. No, they still won games, 12 out of 25 I’m inclined to note. When you take that into account, it’s hard to ignore the repetitive construction of this roster. Looking even closer, I’d honestly be interested in an argument centered around who’s the most replaceable of this lineup — because it feels like LeVert. And with that in mind, who can honestly call him the third-best talent among these Brooklyn Nets?

The best ability is availability after all, and for the rest of his career, that’s a question mark for Caris LeVert.

There are fewer more crucial skills to today’s NBA than knockdown, movement three-point shooting. And there is no better way to describe the evolution of Joe Harris’s game since arriving at Barclays Center, where he’s established himself with the Brooklyn Nets. Walking into this 2020-2021 campaign, Harris isn’t the team’s third-highest paid player — Caris LeVert holds that crown, by just $132,275 dollars.

But is it possible that Harris is the team’s third-best player? Sure. Brooklyn has been a better team when Harris has been at his best. His off-ball movement keeps opposing defenses incredibly honest, and he’s somehow always finding a way to transition from a denied three-point attempt to a crafty move at the rim. Last year, Harris started all 69 games he played, and you should expect that to be the same this season. He averaged 14.5 points and 4.1 rebounds while knocking down 42 percent of his shots from deep.

The Nets have always believed they were a better team with Harris on the floor, from the seasons where they won 20 games to now, what is expected to be a commanding run at the league title. And they’re not wrong to think that. When you have two guys like Durant and Irving that command the best defenders of every team, having a third-option like Harris pushes a pick-your-poison approach on opponents. Brooklyn’s sharpshooter should make the easiest transition into what is now officially the Durant-Irving era at Barclays.

Joe Harris has as good a shot (no pun intended) at claiming the role player All-Star nod that is playing third fiddle behind Kyrie Irving and Kevin Durant in this upcoming season. His seamless fit in an offense that will be evolving day by day is distinctive and galvanizing, two necessities for this team and its personnel.

Okay, that’s not a name you were expecting to see mentioned in this article, I get it. But bear with me.

Do you remember how it happened? How it went down when Kyrie Irving and Kevin Durant ultimately ended up as members of the Brooklyn Nets? They weren’t alone. No, two of the NBA’s best chose veteran big man DeAndre Jordan to accompany them in the next saga of their hall-of-fame careers. ESPN’s Adrian Wojnarowski called it a “clean sweep” when the Nets secured agreements from all three on July 1st.

And not even a season later, there’s still a distaste from fans for Jordan that goes beyond him starting over 22-year old Jarrett Allen. I’m not sure I understand it. Jordan is an all-time rebounder and has a career highlight reel of dunks that wouldn’t be appropriate for anyone under the age of 13. There are some city miles under his legs and he’s recently turned 32 years old, but the Nets’ center can still contribute on both ends of the ball. Jordan averaged 8.3 points and 10 rebounds last year in 56 appearances. But in the six games he started, he posted 8.8 points, 12.6 rebounds, and 1.6 blocks–a notable contrast from his season averages.

The secret here? I’m going to go out on a limb and say engagement level. Jordan signed on with Brooklyn because he (as well as Durant, most likely) assumed he’d be the starting center. When that slipped away from him after Irving’s season-ending injury, I can’t imagine he saw much to play for. I can’t blame Jordan, but he can put this narrative on his head by stepping up this year and giving 100 percent. He makes the most sense in any lineup with Durant at the four, and those two together in the paint will provide a level of rim protection that opposing bigs should find insurmountable on their best nights. DeAndre Jordan is going to be the starting big for this Brooklyn Nets team, and he’ll likely close games out at the five too. He’s not the third-best player on this team, I’ll admit. But don’t mistake his place in the hierarchy on this roster.

There’s no more important player on this Brooklyn Nets team outside of Kyrie Irving and Kevin Durant than Spencer Dinwiddie. He’ll walk into this season as the team’s backup point guard, filling in when Irving is off the floor and provide the second unit a scorer and playmaker. Dinwiddie answered the call last year when Brooklyn’s All-Star point guard went down with a season-ending shoulder injury. In the first 32 games alone, Dinwiddie averaged 23 points and 7.2 assists while getting to the free-throw line over seven times a night. He and the rest of the Nets kept the team above water and in the fray, winning 14 of those 32 and staying well within the playoff picture. It’s worth noting that Caris LeVert missed 25 of those games, but I digress.

But Dinwiddie’s shooting numbers slumped last year, and not just when Irving was out with injury. After knocking down 34 percent of his shots from deep the year prior, he finished last year shooting just 31 percent from behind-the-arc. Credit that to the larger role, credit it to the lineups they were rolling out, whatever.

Still, there’s no denying that Dinwiddie carried this team on his shoulders alone for a time, and they were a mistake or two shy of finishing .500 or better. That value at the point guard position (in a backup no less) is priceless in the NBA, despite what the Brooklyn Nets payroll will tell you. If this team is going to meet or exceed expectations this season, it will be because when Dinwiddie is inevitably asked to start, he reclaims his old role and thrives as he has so many times before.  Even if that comes next to Irving, which isn’t a possibility I’d be quick to dismiss, at least not until we see what Caris LeVert looks like.

This team has so many questions, even if Kevin Durant and Kyrie Irving are 100 percent. But Spencer Dinwiddie was once a question himself when his future in the NBA was hanging in the balance.

Now he has an opportunity to be the Brooklyn Nets’ answer.