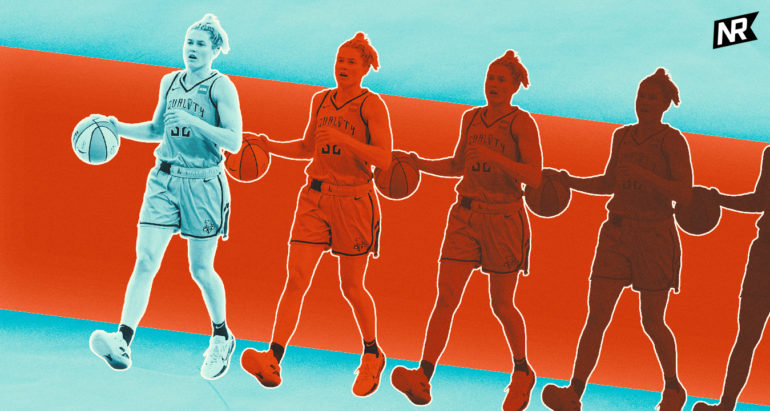 If You Build It, They Whitcomb; How Sami Whitcomb has Hastened the NY Process

Sami Whitcomb might not be an All-Star, but her endeavors in Brooklyn with the New York Liberty are rewarding enough.

This election season has brought about the unthinkable: the rise of a write-in candidate. Rest assured, the drama and stress of a presidential campaign are still three years away. Instead, virtual pencils have been raised to include Sami Whitcomb in the WNBA All-Star Game festivities.

With voting closed, Whitcomb won’t represent the Association’s All-Stars (though teammate Betnijah Laney will) when they do battle against the American Olympic unit tonight, on July 14 (7 p.m. ET, ESPN). Her exclusion is no fault of her Liberty teammates, who volunteered as Whitcomb’s campaign staff as voting entered its final stages.

“Sami just had an absolute breakout year,” Bec Allen said of Whitcomb. “I know in previous seasons, she’s really shown what she can do. But here, where she’s able to have that green light and that extended playing time, she’s really showing us all of her skill sets and she’s obviously a huge piece of our team.”

“She helps us win games when we’re down or up. It doesn’t really matter but she’s like that spark at all times,” Kylee Shook added. “She’s a great player and a great leader. It just kind of (stinks) because there are not that many spots on the All-Star team.”

Ironically, the only player in New York that flat-out refused to endorse Whitcomb’s All-Star candidacy…was Whitcomb.

“I think that’s a little ridiculous,” Whitcomb bluntly replied, albeit with a smile, when asked about the notion of earning an All-Star nod. “Sure, it would be great. But I think we know that that’s probably not the case.”

Whitcomb could no doubt use the rest as the Olympic break, and the month-long hardwood holiday that comes with it, looms in the immediate future. She recently learned that her sabbatical will be slightly delayed. Hours before the Liberty tipped off against Indiana on Friday, Whitcomb learned that she was nominated to partake in the league’s three-point competition, which will be held at halftime of the exhibition. She’ll compete alongside former teammate Jewell Loyd (Seattle Storm), as well as Jonquel Jones (Connecticut Sun) and Allie Quigley (Chicago Sky).

Whitcomb will likely then use the ensuing downtime to recharge and regroup before the Liberty embark on their first legitimate postseason push in four seasons, doing so alongside her wife Kate and son Nash. The two-time WNBA champion has spent the past 19 games building a similarly solid foundation on the court.

As the Liberty inch their way back toward respectability on the backs of young, emerging talents, Whitcomb has become one of the faces of the Liberty’s famed hybrid rebuild plan, making her mark on not only Brooklyn box scores but the league as a whole. No one has sunk more triples in 2021 WNBA action than Whitcomb (a league-best 56 at the break) and her success rate (43.8 percent) is sixth amongst qualified shooters.

Few probably could’ve envisioned Whitcomb, set to turn 33 in just under two weeks, becoming such a vital part of the New York hardwood resurgence. When she switched coasts in a multi-team deal, the headlines belonged to fellow former Emerald City-dweller and reigning WNBA champion Natasha Howard. But right from the get-go, Whitcomb made her presence felt in her new office: after starting only 13 games over her first four WNBA seasons, Whitcomb has been on the floor for the opening tip in each of her first 21 New York appearances.

It would’ve been easy, almost understandable for Whitcomb to fade into the New York background, bide her time, and let young players take over. But Whitcomb, a player who has clawed her way into a major WNBA impact after serving as a silver lining for the University of Washington’s roller-coaster program, wouldn’t hear of it.

Whitcomb, after all, is now one of the W’s most respected sharp-shooters. After she left Seattle the first time, she enjoyed a brief training camp stint in Chicago before passing on a European opportunity to join UW basketball’s front office. Only seven years later did she partake in her first WNBA action, appropriately returning to Seattle but exchanging purple for green as a member of the Storm.

Her preference for the outside was already well documented, and New York was well aware of it. In just her third showing in the Association, Whitcomb torched the Liberty for six triples and 22 points. Two years later, Whitcomb left her metropolitan mark in a painful way that later turned out to be fortuitous foreshadowing: in the first WNBA regular season game at Barclays Center in August 2019, she had 18 points in Seattle’s 84-69 victory.

One could almost accuse Liberty management of bringing Whitcomb in if only to curb the carnage.

Whitcomb is proud of what she has been able to accomplish in seafoam so far, but is hungry for far more. Both Whitcomb and New York have overachieved in the eyes of some observers. But Whitcomb isn’t, and probably won’t ever be, satisfied.

“I don’t ever really live up to (personal expectations) in terms of what I want to do, what I’m trying to do,” Whitcomb said. “I think we all have really high expectations of ourselves. We’re striving to be perfect out there, usually…typically, I’m not living up to them but I’m striving for them and that’s really all I can ask.”

“There are lots of things that I’m not happy with from game-to-game that I want to keep getting better at.”

It’s thus no surprise that Whitcomb has thrived in Hopkins’ system that cherishes fearless outside shooting. Whitcomb has already started to rewrite the three-point chapters of the Liberty’s record books. On June 26, she added her name to the list of New Yorkers who have sunk a team-record seven triples in a single game, a list that also includes Crystal Robinson, Sugar Rodgers, and Amanda Zahui B. She nearly became the first player to earn a re-entry, hitting six in Monday’s win over Dallas, a historic win that saw the Liberty sink a franchise-record 15.

But Whitcomb’s true value has come in an unthinkable spot: the 5’10 Whitcomb has turned into one of New York’s most, if not most, reliable rebounders.

The Liberty’s rollercoaster season has seen unfortunate loops form through injuries, which have been particularly cruel to the team’s strongest defenders. There’s still no timetable on Howard’s return while the late stages of Allen’s pre-Olympic slate has been marred by a foot injury. Whitcomb’s newfound interior abilities have kept the team afloat while the disturbance caused by those injuries has lingered.

Whitcomb’s 2021 rebound tally of 5.7 per game is more than double, nearly triple, her career mean (2.2). It’s tied for a New York-best with Sabrina Ionescu (not counting the 6.5 Howard has averaged over her two brief appearances).

She has earned at least six rebounds in seven of her last eight games while maintaining her reliable shooting, sinking at least half of her baskets in 11 games thus far.

Asked about Whitcomb’s interior work after last Monday’s triumph, Hopkins admitted he was a bit surprised to hear her name attached to a rebounding inquiry. But he was more than aware of the impact she was making, praising Whitcomb for making guaranteed contributions when teams cracked down on, or at least tried to slow, her outside attempts.

“She’s finding ways to impact the game outside of her shooting, which is so big,” Hopkins said. “There are games when teams really key in on her, as they should. She’s not going to get a ton of those open looks and she’s finding out now just how good she is when she puts the ball on the floor, how good of a playmaker she is, how good of a finisher she is. I can’t say enough about Sami and her rebounding.”

For Whitcomb, it’s all in a day’s work and a team effort, a mere matter of stepping up in times of trouble.

“[Rebounding] is a focus for us for sure because sometimes we are undersized and it’s obviously really difficult for the bigs to box out other bigs and then go get the rebound too. That’s a tough task,” Whitcomb said. “I think it’s a focus for all of our guards, really, to kind of come in and crash and get those boards, you’ll often see [Ionescu] with lots of rebounds, [Laney] with lots of rebounds. All of our guards know it’s a focus for sure and I think sometimes I just happened to be the one that ends up getting it.”

The theme of Whitcomb’s season has been stepping up and refusing to hide in times of distress. The Liberty sputtered to end the pre-Olympic slate, besieged by travel woes and a pair of tough losses against Indiana and Connecticut. When the Liberty went their separate ways after the latter loss to the Sun on Sunday evening, Michaela Onyenwere said it that was Whitcomb’s voice they heard the most, seeing her muster that energy after a dismal shooting output (two-of-seven from the field, one-of-five from three-point range).

“Sami just continues to be a really steady and consistent leader, regardless of how she’s playing,” the rookie said. “I think that’s been kind of the story for her since the beginning of the season. Even in training camp, she was in my ear, telling me all the time ‘Okay, this is not the right read, this is the right read.’ She was somebody who I personally could really lean on, but I think our whole team does as well.”

Whitcomb might not be going to Vegas to battle alongside the WNBA’s finest. Her impact in New York against them, however, is proving invaluable.