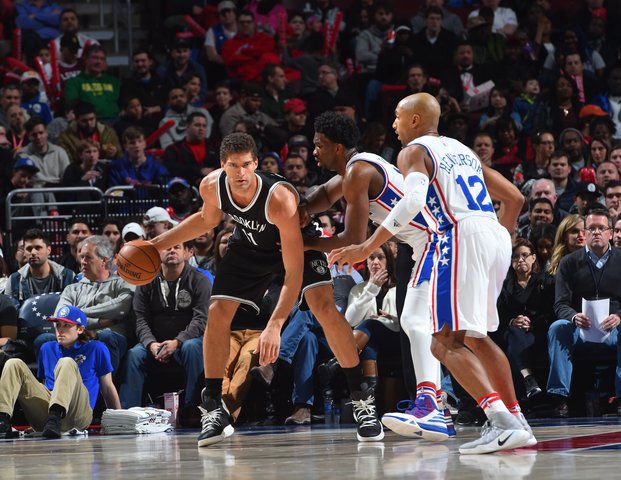 PHILADELPHIA,PA - DECEMBER 18: Brook Lopez #11 of the Brooklyn Nets backs up to the basket against the Philadelphia 76ers at Wells Fargo Center on December 18, 2016 in Philadelphia, Pennsylvania NOTE TO USER: User expressly acknowledges and agrees that, by downloading and/or using this Photograph, user is consenting to the terms and conditions of the Getty Images License Agreement. Mandatory Copyright Notice: Copyright 2016 NBAE (Photo by Jesse D. Garrabrant/NBAE via Getty Images)
Home
Brooklyn Nets
Nicholas LeTourneau

When the Brooklyn Nets took the court against the Philadelphia 76ers on Sunday night, fans were excited about the possibility of seeing a finally healthy squad pull everything together and get a victory against a divisional opponent. Jeremy Lin has returned, Caris LeVert has made his debut, Kenny Atkinson’s motion offense has been assimilated and accepted; things are looking up. Even with all this clicking for the Brooklyn Nets, the win never materialized for them as they watched Joel Embiid and the 76ers walk away with a nail-biting 107-108 victory.

What was most disappointing about this close loss, is that the Nets could have and should have won this game. The Nets had a nine point lead in the third quarter and had finally gotten some separation from the 76ers, but that all collapsed in the fourth quarter in a major way.

Thanks to the power of 3Ball.io, we can go back and take a look at exactly how and why the Nets lost this game. The four biggest factors that led to this loss was letting role players take over the game for Philadelphia, putting Trevor Booker on Joel Embiid for most of the game, the 76ers pulling down twice as many offense rebounds as the Nets, and lastly Jeremy Lin not seeing the court enough.

Joel Embiid had a career night and was without a doubt the biggest force on offense for the 76ers, make no mistake, but this game was won by the solid play of the team as a whole for Philadelphia. T.J. McConnell looked like White Chocolate reincarnated with how effortless and clean his assists were, Robert Covington was able to do just about anything he wanted all game long, Gerald Henderson hit almost all of his shots, and Ehsan Ilyasova carved up with second unit to the tune of 22 points.

McConnell finished with eight points and six assists in 24 minutes of play and was able to not only keep Philly’s second unit humming along, but was a big reason they were able to keep playing at a high level thanks to his passing and smart shot selection. Covington went five for eleven from the floor and finished with 15 points and five rebounds and was able to get to just about any spot on the floor he wanted to. His game is reminiscent of Josh Smith in the mid-2000’s, but with a better jumper. He was a physical mismatch for anyone that guarded him all night.

Henderson’s 10 points came on four of six shooting and while it may not turn heads, in a one point game every point counts. His veteran presence and smart shot selection was a difference marker in the game. Finally, Ilyasova had one of his best games of the season. His jumper is something that needs to be respected, and the Nets did not do so by leaving him open for easy mid range jumpers throughout the game.