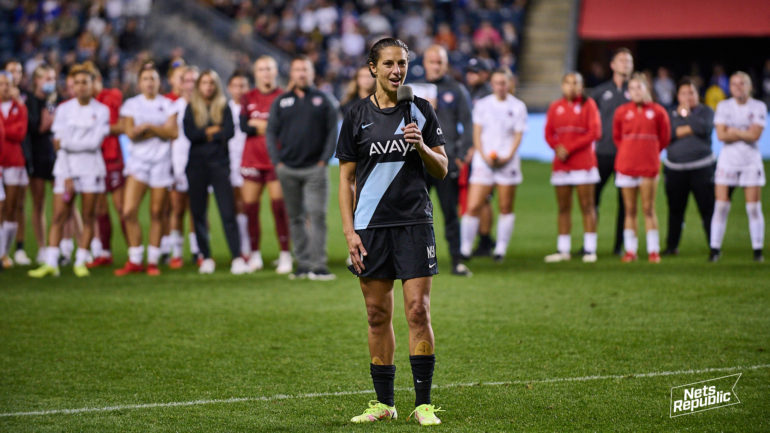 The Delran, NJ native joined Gotham FC (then-Sky Blue FC) in 2018 and played with the team for three seasons until she retired at the end of 2021. In that time, she was integral in bringing the club to the 2021 Challenge Cup finals and also helped steer the team to their first playoff spot since 2013.

This announcement is part of a growing trend of former players joining the ranks of NWSL organizations at various levels, including in coaching, management, or ownership roles.

For Lloyd, being able to stay involved with her home-state club seems like a logical next step in her career.

“As my home club, Gotham FC has always been close to my heart,” said Lloyd in a press release put out by the club. “It’s an honor to begin this new chapter of my soccer career surrounded by people who are committed to making this the best club and league in the world.  I look forward to working with Yael Averbuch West, Andrea Pagnanelli, and my fellow owners to continue this organization’s impressive transformation.”

“When Carli retired last season, we always envisioned her remaining a part of Gotham FC and we are thrilled to make that vision a reality,” said Tammy Murphy, Club Chair and Majority Owner of Gotham FC in a press release. “Her unique perspective as a former player and world champion will be a tremendous asset as we continue to push this club forward.”

According to the club, Lloyd’s role at Gotham will encompass a number of initiatives to boost the organization’s profile around the world. She will act as a consultant and advisor, and work together with club leadership and existing ownership to promote the club and support its players.

“It’s a privilege to welcome an all-time great into our ownership ranks,” said Operating Owner Ed Nalbandian said in the press release. “Carli played such an important role in the evolution of our club as a player thanks to her work-ethic, passion, and unrivaled desire to win. Those traits will make her an invaluable addition to our leadership, and I cannot wait to work closely with her.”

Gotham FC begins their regular season this Saturday May 1st, away at Orlando. The game will stream on Paramount+ at 7PM ET, and is available on Twitch for international viewers. Click here for more information on their upcoming schedule.