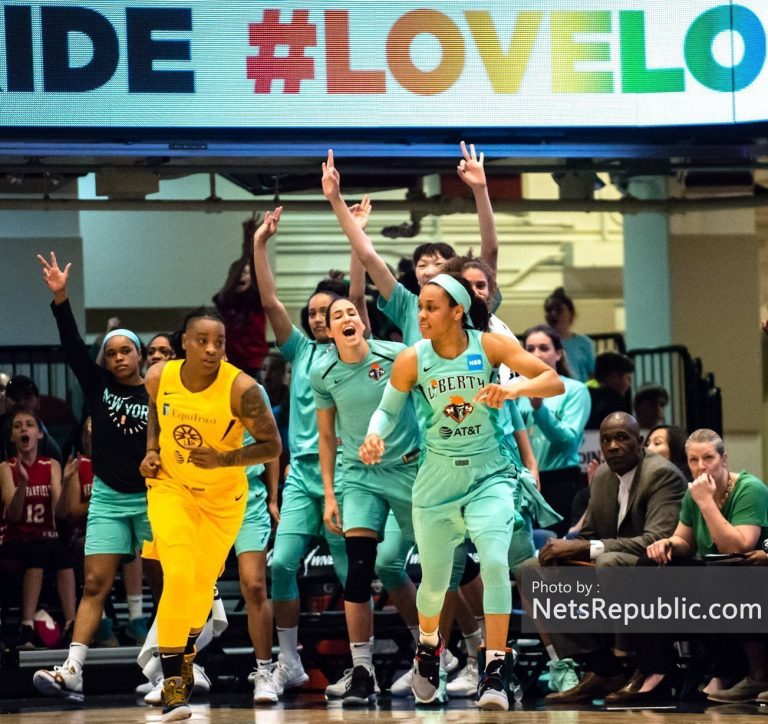 Hi, everyone! Here at Nets Republic, we’re devoted to expanding our coverage of the New York Liberty to even greater heights in our second season writing about the team, which is why we’ll be doing Liberty roundtable discussions this season featuring our three Liberty writers: Justin Carter, Myles Ehrlich, and Geoff Magliocchetti. We’ll get on a more regular schedule once the season itself arrives, but for now the plan is to do one every other week.

The format of these will probably feature short answers to a variety of questions, but for this first one there was really only one question on everyone’s minds: With the WNBA announcing roster cuts down to 12 need to be made by May 26th, we each decided to predict what we think the final Liberty Roster will look like. Here are our picks and our reasoning.

When it comes to the New York Liberty’s upcoming roster decisions, the kids, it appears, may be all right.

The team’s 2020 offseason proceedings have centered on change. Even Lady Liberty herself was mostly relieved of duty from the team’s logo, limited to her hand and her torch accessory. The change has been most prominent in the lineup.

Franchise staple and record book mainstay Tina Charles was dealt in a blockbuster deal. Tanisha Wright retired after her second stint with the team. Bria Hartley went west and Brittany Boyd was bid farewell. The coaching staff has undergone a makeover as well, with new boss Walt Hopkins and assistant Shelly Patterson essentially coming over in a de facto trade for Katie Smith.

New York’s new era is defined by youth. The new arrival of Layshia Clarendon is the most experienced member of the team, and she just turned 29. One year her junior, Rebecca Allen is the longest-tenured New Yorker.

Obviously, Sabrina Ionescu is a lock to make the roster, and fellow top ten choices Megan Walker and Jocelyn Willoughby are likely secure as well. But what of the remainder?

It’s tough enough for second-round picks to make a roster when all is well. Thus, Leaonna Odom’s WNBA case may tragically be over before it truly begins. So how does Kylee Shook get to stay? Her defensive prowess (the Liberty gave up 87.6 points per game after the All-Star break) and connection to Ionescu’s fellow top two pick Asia Durr (teammates at Louisville) may be enough to save her.

Such an endeavor would probably force the Liberty to bid farewell to Kiah Stokes. Hopkins remarked during his introductory presser that second-year interior threat Han Xu is “part of the plan”. Unless she opts to stay overseas this season (like Steph Talbot did), there’s no indication that Hopkins has changed his mind. The Liberty’s endeavors have centered on opting into a new era. Buying out the rare veteran Stokes would only serve to continue that theme.

The final departure would also come in the interior in the form of Reshanda Gray. It would heartbreaking to see Gray go, especially with any form of a fight unfairly eliminated. Gray returned to WNBA regular season action for the first time since 2016 last season and became a major contributor in the New York lineup. Had the Liberty won a few games, she possibly could’ve warranted some Most Improved Player votes.

There are not too many players on the bubble for the Liberty. I’ll make the assumption that all players are physically able to come to the United States for a season (which may be tougher for New York than most other teams). By my count, seven are already assured their roster spots: Rebecca Allen, Layshia Clarendon, Asia Durr, Sabrina Ionescu, Marine Johannes, Kia Nurse, and Amanda Zahui B. Megan Walker, with her 45 percent three-point shot, is a near lock to make the roster, and I’m leaning yes on Kiah Stokes as well. Although she doesn’t quite mesh with Coach Hopkins’ positionless versatile system, New York’s frontcourt will need a veteran presence down low for the games against teams like Washington and Las Vegas.

That leaves six players fighting for three spots. Of the remaining rookies, I like the odds of Jocelyn Willoughby and Kylee Shook cracking the opening day roster. Willoughby’s physical style has her more pro-ready than most prospects, and Shook’s defensive length and shot-blocking ability (not to mention her long distance stroke) make her the kind of project Hopkins and the coaching staff will want to build on from day one.

Leaonna Odom is the most likely draftee to get cut, and not just because she was the team’s final selection off the draft board. Though insanely athletic—her 27.5 inch vertical matched what NBA star Devin Booker put up at his pre-draft combine—she’s the rawest talent of the five incoming prospects. Odom would likely never see the floor, but would be a terrific practice player while developing, due to how she runs the floor and plays with energy.

Jazmine Jones’ selection surprised me on draft night, since New York had so many guards already (fully aware that positions mean next to nothing on this team). She does bring some potential as a perimeter defender, and the Liberty have a need everywhere for scrappy defenders.

The final two options are returning players, Reshanda Gray and Han Xu. Gray is the easiest for New York to part with, as she’s only on a training camp deal. Last season, she fought hard in each minute she played, doing all the down-low dirty work many players shy away from. The team would miss her energy, but Gray’s upside is not as high as most of the incoming class.

The final option is Han Xu. The 20-year-old center still has lots of developing to do, but I can’t help but wonder if the front office might step in and tip the scales in her favor here. Last season, by my eye test, a few player names dominated handmade signs and jersey backs: Tina Charles, Kia Nurse, Asia Durr, and Han Xu. Before last season, owner Joe Tsai also set up a scrimmage against the Chinese National Team, Han’s former team. If the team sees her as a fan draw, Han might just get that coveted final spot.

I think at least one of the team’s international players — if not multiple — are going to stay overseas this year because of the ongoing COVID-19 pandemic. My prediction for which one right now is Han Xu, because even with a young roster this year, it’s hard to imagine her getting the amount of run that would justify her coming over. I don’t think getting clearance to come play in the WNBA from Europe or Asia is going to be easy, and while players expected to play valuable minutes might jump through those hoops, a player with a fairly undefined role might be better served to just sit this one out. Han is still part of the long term plan here, but she’s also the youngest player on this roster. I don’t think she needs to be here in 2020 to still be part of the plan, especially when the team needs to get a look at some of their other young players who don’t have the same amount of future development time ahead of them.

Beyond that, I think the choices are pretty easy. Ionescu, Walker, and Willoughby are the rookie locks, but I think Jones and Shook are virtually locks as well, as both were taken within the first 13 picks and both bring something useful to the team. Jones and Shook both do things that this team wants to do, and their familiarity with Asia Durr can be useful.

Otherwise, there’s not a ton of questions. I’ve seen people on social media talk about Rebecca Allen not making the team, and my response to that is to say that those people don’t understand the value of Rebecca Allen. Katie Smith unlocked her potential as a stretch four last year and the whole team started playing better when she was in that role; Allen’s going to excel under Walt Hopkins. I’d play her as the starting four for now, though long term the goal should be to get Megan Walker there.

Leaonna Odom and Reshanda Gray are the two players I’d expect to be cut. Odom has a ton of potential, but she’s the farthest away from being a WNBA contributor of all the rookies this team picked up. I wish she was getting a chance to show off in the preseason, but that didn’t happen. Hopefully she eventually bounces back onto a roster somewhere. And Gray was a key player on last year’s team as the third big, but with Stokes back and the team devoting themselves to barely playing any bigs, Gray and her very under-the-radar rebounding skills don’t seem to have a place on this team.