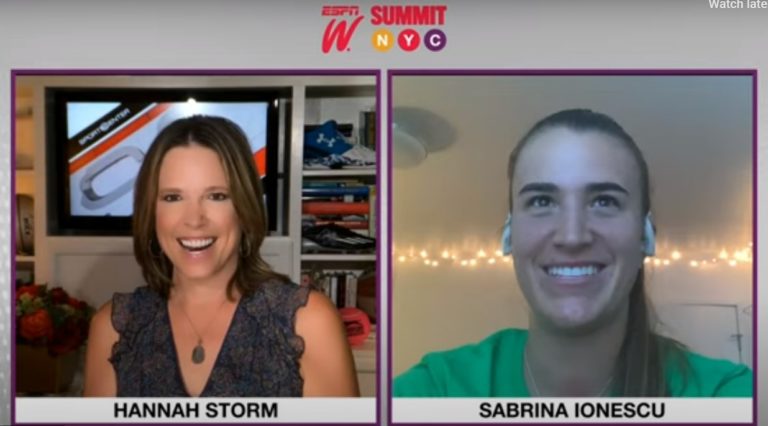 Sabrina Ionescu at the Summit: A Conversation with espnW

On Thursday, May 28, espnW held its second annual Summit NYC, an event that brings together women from across the sports industry. Reporters, influencers, and athletes populate panels to offer a small glimpse into some of the work they’ve done. This year, of course, it took place virtually. Rather than limiting the proceedings, the format allowed for an open guest list, and more than 13,000 people signed up to watch from home. Under the dexterous direction of emcee Sarah Spain, the three-plus hour event moved from conversation to conversation without technological hiccup, a testament to everyone’s Zoom capabilities in the age of COVID-19.

This was a murderer’s row of media superstars, from Mina Kimes and Katie Nolan to Elle Duncan and Julie Foudy. Gymnastics icon Simone Biles and USWNT wing-back Crystal Dunn promoted their sports.

So did New York Liberty draft pick Sabrina Ionescu, who continues to command the spotlight, even as the pandemic has thus far prevented her from taking the court as a WNBA player. Alison Overholt, Senior Vice President of Storytelling and Journalism at ESPN, introduced the newest franchise cornerstone with a clip from Sabrina Ionescu: The Making of a Legend, an ESPN Cover Story.

That transitioned straight into Ionescu’s segment, a one-on-one interview with SportsCenter anchor Hannah Storm. Due to the Coronavirus, Ionescu has spent much of the past two months back home in Walnut Creek, California, where she’s been doing her best to stay in basketball shape.

“I’ve been working out at home every morning, just in my backyard. I’ve been lifting, doing a lot of pushups, crunches, doing a lot of body-weight stuff,” she told Storm. “And I’ll go to my middle school or my high school and I’ll run around the track or shoot at the hoops outside. I’ve definitely been able to practice, work out, and stay active.”

Even though the WNBA Draft was also remote this season, being home allowed Ionescu to share the experience with the people who mattered most: her parents; her brother, Eddy; her high school coach; and her agent.

For now, Ionescu is back in Eugene, Oregon, knocking out the last few weeks of her master’s program. She will soon complete her degree in Advertising and Brand Responsibility, a smart investment for a woman who recently signed with Nike, and will hopefully gather many more endorsement deals in the future.

Making it to the W has been a long-term goal for Sabrina Ionescu, as evidenced by the prophetic elementary school video in which she states her intentions to be drafted. When Storm ran back this tape, Ionescu shook her head and smiled sheepishly, a hint of embarrassment breaking through. The confidence of the young girl in the footage persists today in the woman whose name dominates the NCAA’s basketball record books.

“I just knew that was the best league to be a part of, and I knew I was loving playing basketball at that time, so I wanted to do everything I could to reach that level.”

Who was her biggest WNBA influence at that age? A guard that spent the first half of her 16-year career calling Madison Square Garden home.

“Becky Hammon was definitely my favorite player,” Ionescu said. “She was my first and only WNBA jersey that I owned.” Sabrina would have been nine at the time Hammon left New York, but Storm unfortunately did not follow-up and ask if the jersey Ionescu owned was from Hammon’s Liberty days or from her time with the San Antonio Silver Stars.

Hammon continues to inspire Ionescu. After retiring from the W, the six-time All-Star made the leap over to the NBA, where she serves as an assistant coach to the San Antonio Spurs and Gregg Popovich. “Seeing her able to transition from the WNBA to [coaching] in the NBA is something I continue to watch and am really impressed by.” Ionescu has yet to meet Hammon in person, though they’ve exchanged a few messages on Instagram.

Aside from her individual workouts, Ionescu is doing whatever she can to prepare for the upcoming season, flushing away the stresses of whatever she cannot control to focus on what she can. “I’m definitely watching a lot of game film,” she said. “That’s my Netflix now.” The team has Zoom calls once or twice a week to go over plays and talk through game strategy. It’s here that the players get to know each other. “Obviously, it’s different than being on the court, being in the same city, so we’re having to figure out how.”

Building team chemistry will take time. This Liberty team returns only four players from the 2019 roster: Rebecca Allen, Asia Durr, Kia Nurse, and Amanda Zahui B. Veteran Kiah Stokes returns after missing the 2018 season, and guard Layshia Clarendon comes over from the Connecticut Sun as the sole free agency signing. The other six players on the team, including Ionescu, are all rookies.

With the youth of this roster, many writers expect New York to finish last. Ionescu, who helped to build a struggling Oregon program into a college basketball powerhouse over the course of her collegiate career, is ready to prove the doubters wrong.

“We’re expected to finish last,” she said, “but our expectation for ourselves is a lot higher than that. [It starts with] having the right pieces in place and teammates that are committed to winning. Not only playing for themselves, but playing for that person next to them. I know we have great pieces… to hopefully transform that franchise. Sky’s the limit.”

But Sabrina Ionescu is not getting ahead of herself. This year has taught her, like it has many of us, the importance of living in the moment. It has been a difficult year for Sabrina Ionescu. Back in January, there was the horrific accident took the life of her friend and mentor, Kobe Bryant, as well as his daughter, Gigi, and others. That loss has helped Ionescu gain perspective on other disappointments, such as having her Ducks career cut short without a final run at the title. She lives with a new philosophy, one that she will impart to the students of Oregon as their commencement speaker in a few days.

Ionescu is staying present, an active voice in her own story. “Be where your feet are and live in the moment. If you’re not, you lose focus. I’m trying to be where my feet are every step of the way.”