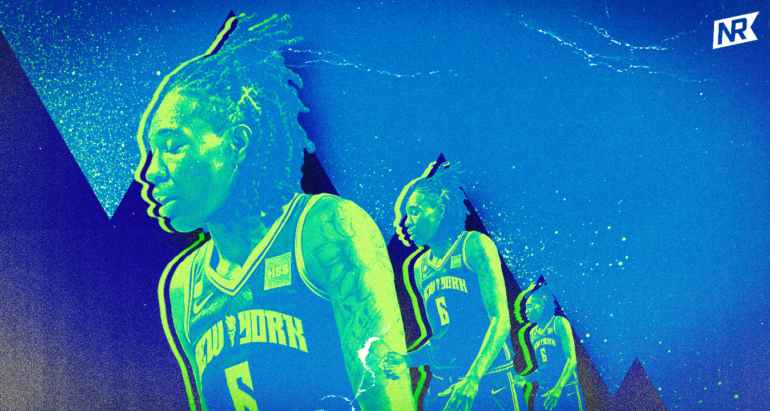 New York Liberty: Three Ways the Natasha Howard Injury Doesn’t Have to Be a Disaster

The New York Liberty find themselves in a familiar spot: missing Natasha Howard. How can they soothe the blow of her loss?

The three-time WNBA champion left the latter stages of Monday’s win over Dallas with an apparent knee injury. New York confirmed on Wednesday that Howard has an MCL sprain that will keep her out for four to six weeks. Based on that timeframe, Howard’s earliest return would come during the week of June 22, when the Liberty host consecutive home games against the Chicago Sky.

In the meantime, the surging Liberty (5-1) will have to continue to make do without Howard, who put up 29 points and 13 rebounds over her first two metropolitan contests. But this team has overcome a lot already—what’s one more obstacle?

Nets Republic has three ways Howard’s misfortune doesn’t have to be the end of the world:

Get Stoked for Stokes

The Liberty’s recent back-to-back endeavor was almost entirely Kiah Stokes-free, but she was pressed into action on Monday after Howard’s injury. Despite being held out of the likewise-victorious Sunday visit to Chicago, Stokes came up big in her late insertion. She earned an assist on a crucial Sabrina Ionescu triple and pulled down a rebound that more or less ended the Wings’ rally in the penultimate minute.

“Kiah Stokes, I thought she was fantastic today,” he said Monday. “She was coming off real cold and was stepping in for a really tired Kylee Shook. Kiah came in and held it down for us.”

Stokes is in a bit of a precarious position, as she’s expected to partake in the EuroBasket Women tournament, which starts on June 17. With the Liberty forced to bide their time on Howard again, it’s likely Stokes will be relied upon until her flight leaves. A dangerously enticing showdown looms large on June 5, as the Liberty travel to Uncasville, Conn. to battle Jonquel Jones and their current siblings in the legion of 5-1, the Connecticut Sun.

Last year in the bubble was an unusual journey for Stokes, the sole survivor of the Liberty’s famous “Baby Vet” dwelling. It was a process that saw somewhat her abandon her interior role to fulfill a newfound desire to shoot from the outside. Stokes’ 2021 activities have been more standard fare, as she has rebuilt a home in the paint. In her season debut against the Minnesota Lynx, Stokes pulled down six rebounds over 11 minutes of action, including two offensive boards.

The Five is Shook

Over the past two games, Kylee Shook made a case to be the Liberty’s best draftee.

Of course, her status on the team was well established coming into this season, but she held a role in the starting five over the first four games while Howard took care of business with her Italian team. Howard’s brief return sent Shook back to the bench, but she responded well, particularly in Sunday’s visit to the Windy City, tallying six rebounds and two blocks. But with Howard’s lengthier absence in store, Shook will truly be tested.

Fortunately for the Liberty, Shook succeeded in a trial by fire. Not literally, of course—the Portland franchise folded in 2002—but this season has already matched her up against Teaira McCowan, Sylvia Fowles, and Tina Charles. Her success has given Hopkins the confidence that she can plug in the gap Howard leaves behind.

“She’s literally done every single thing we’ve asked for,” Hopkins said of Shook’s sophomore season. “Kylee is absolutely a good example of the culture that we have here. She’s willing to do whatever it takes. She’s willing to play anywhere on the court. She doesn’t care if she shoots, she doesn’t care if she just plays defense for 30 minutes… she’s really an unselfish team-first player and you know that’s the crux of what we’re trying to build here. So yeah, we’re really lucky with Kylee.”

A Fourth Shade of Gray?

If any one player personifies the WNBA’s desperation for expansion, it’s Reshanda Gray. The journeywoman has built a solid professional career, one that enjoyed a significant boost with the rebuilding Liberty in 2019. That year, Gray partook in her first WNBA regular-season action in three years and transformed from the 12th woman on the opening regular season roster to a reliable veteran mentor and contributor.

Gray briefly redonned seafoam this season, her third go-around in New York after spending 2018’s training camp on the team roster. She was a strong interior presence in an early season pair against McCowan and the Indiana Fever. So trusted was Gray on opening night that she was on the floor for what became the final New York possession in the 90-87 triumph.

If Howard’s injury allows the Liberty to obtain yet another hardship contract, don’t be surprised if Gray earns herself another term in New York.

“She’s a veteran coming in… she has that experience in the league so she knows what it looks like,” Betnijah Laney said about Gray prior to opening night. “She’s just a player that gets after it, she plays hard every single second that she’s on the floor… she does the intangibles, she makes sure she’s boxing out, she’s very physical.”