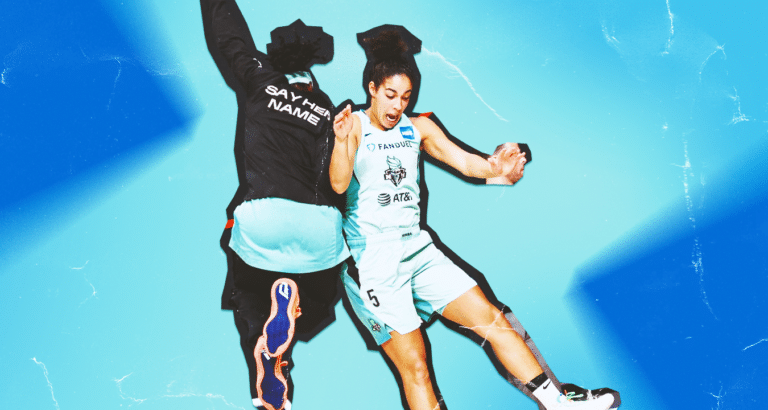 The New York Liberty continue to search for an elusive victory. They’ll face some familiar foes in that endeavor this week.

The New York Liberty’s 2020 Bradenton bubble endeavor has only nine games remaining. It’s almost shocking that there are only nine games left in the scheme, but it perhaps presents an unfortunate reality for the Liberty (1-12), whose young, fledgling squad has little chance to rectify their wrongs in the cramped schedule.

Last week was perhaps one of the more testing weeks the Liberty have seen in their Floridian escapades. A rematch with the Seattle Storm on Tuesday ended in a 105-64 shellacking and losses to the Chicago Sky and Connecticut Sun followed shortly after.

Headed into a week that includes matchups with Chicago, Dallas, and Las Vegas, the Liberty did receive a bit of good news this week when it came to the status of Sabrina Ionescu. New York revealed that the overall pick of April’s draft will not require surgery to repair a sprained ankle after an incident in the July 31 game against Atlanta.

Star of the Week: Kia Nurse

Nurse had her best week of the season, showing viewers why she was elected to her first All-Star Game last season. She provided the Liberty some hope to start the week by volunteering to reenter Tuesday’s one-sided contest against Seattle in the fourth quarter. The gambit produced season-highs in scoring (21 points) and shooting (6-of-12 from the field and 4-of-8 from three-point range) and helped provide some hope and confidence to the young lineup.

While consistently sinking the open looks continues to be a bit of a struggle, Nurse has continued to find other ways to contribute on the court. She had a season-high seven rebounds against Chicago and visited the foul line 19 times this week, sinking all but two opportunities. It has allowed her to keep a strong scoring pace, as she averaged 17.7 points per game in the preceding week.

Nurse recently spoke of her world’s shrinkage thanks to the cramped settings of the Bradenton bubble, but she credited the use of meditation to help her get through a tough opening stretch to the season, which saw her miss her first game due to injury.

“I’ve used a lot of meditation over the last 20 days…just to kind of get away from where I am right now,” she said. “When I’m usually not here in the bubble, I usually just go and do something else. I hang out with my family, I hang out with my boyfriend and his family. I step away from basketball so I don’t have to think about it and it’s not the only thing on my mind.”

After the relatively competitive tilt on Thursday, the Liberty won’t have to wait long for another crack at the Sky after Thursday’s get-together. Chicago (10-4) took that battle 101-85 to add to their active four-game winning streak. New York was able to force the Sky into low-percentage shots, but that term may well not exist in the Chicago basketball glossary. To that point, the Sky sank 11 of their first 19 points from three-point range.

Youth will be in ultimate revolt on Thursday night, as the two youngest teams in the league do battle for the second time this season. The Wings (5-9) are currently in the midst of a somewhat surprising playoff chase, as they currently sit a half-game behind Indiana for the final WNBA playoff spot. Their previous matchup with the Liberty came on July 29, when Dallas took a 93-80 decision behind 20 points from Arike Ogunbowale. Ionescu tallied an infantile career-best 33 points in defeat. Second overall pick and Ionescu’s fellow Oregon alumna Satou Sabally had 12 points for the winning effort.

The Liberty took the Aces (10-3) to the brink on August 9, as Vegas needed a game-winning shot from A’ja Wilson with six seconds remaining, one that broke a tie en route to a 78-76 victory. It capped off a banner day for Wilson, who had 31 points and reached the foul line a dozen times. The win over the Liberty has been part of a 9-1 stretch for the Aces, whose most recent victory was an 82-74 triumph over the league-leading Storm.

“At that point, it was just that you could go down fighting or you could go down not fighting. I knew that I had a lot of energy and that I could play as hard as I could. I know it’s tough, especially as a rookie, to be on the court at that time and try to find something, something that works. I told Dustin that I wanted to go back in, I wanted to help (the rookies) out. I think, for me, it was just about being able to continue to impact the game. Tonight, it was trying to play as hard as possible.”-Kia Nurse on why she asked to be reinserted into the late stages of the blowout loss to Seattle

“I’m really proud of the team. Chicago’s a heck of a team. They shot the heck out of the ball tonight and made us pay for some lapses in our defense. But what’s been missing is our group believing in themselves, I think. They found that again tonight. Their energy was fantastic. Even when they were making mistakes, their energy was there.”-Walt Hopkins on the 101-85 loss to Chicago

“We have so many young people. You can’t stop practice enough, you can’t stop the game enough, because we have to keep playing. I think that’s one of the hardest parts for me. I just want to stop, teach, and tell people things, but we don’t have that luxury. We’re practicing on TV every night through our games. You see the different point differentials in some of these losses.”-Layshia Clarendon on the cramped aspect of the bubble schedule

“Essentially, if you really look at what confidence is, you always have it. It’s just the fact that doubt, or concern…comes into your mind and clouds that. The confidence is there, it’s just behind some doubt. You just got to move it out of the way a little bit. You’ve got to be able to let it go. A lot of times, it can’t come from wins and losses. It has to come from the ability to know in yourself, and in your mind and heart that you put that work in.”-Kia Nurse on the confidence of her young teammates