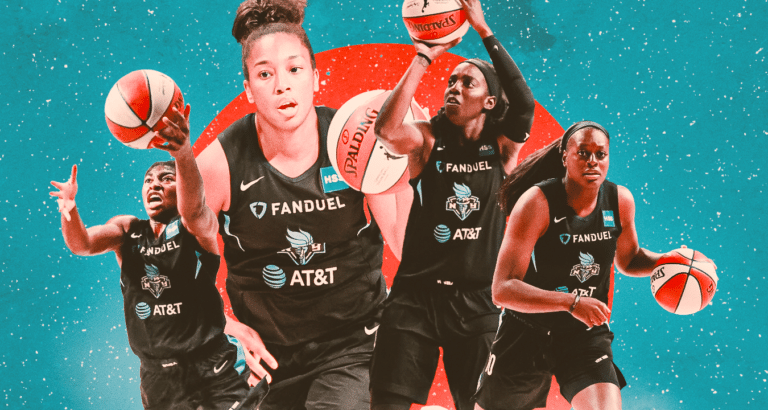 Jazmine Jones flips the ball to Megan Walker in the high post, all five New York Liberty players momentarily strong side. Three Los Angeles Sparks defenders swarm, and Walker hot-potatoes an instantaneous return pass, narrowly avoiding a turnover as Brittany Sykes swipes at the hand-off. By the time Jones secures the possession, T’ea Cooper is pressed up, harassing her 25 feet from the basket. Walker comes to set a screen, but instead slips and pops out to the left, dragging her defender, Nneka Ogwumike, from the free throw line, and creating a sliver of a driving lane. Jones takes advantage. She bullies past Cooper, pinballing off the opposing rookie with one strong dribble, while avoiding another steal attempt by Sykes. When the six-foot Jones gathers, she’s got just one more Sparks player between her and the basket: six-foot-four two-time MVP Candace Parker.

To get an angle, Jones leaps to the right off both feet, the attempt a wild underhand scoop that Parker nearly blocks with a right-armed swing. The ball hits back iron and bounces high before kissing the glass and dropping in. Jones doesn’t see it fall through. The momentum of the drive has taken her to the ground, and she’s on her head mid-somersault as the points get added to her total.

There’s approximately 150 seconds to the final whistle, and it’s been an uphill battle all night long. It’s August 11, 2020, and the New York Liberty are playing the Los Angeles Sparks. The score, after Jones’ heroics? 87-72, in favor of LA.

“Jaz was a spark,” Coach Walt Hopkins told reporters on Zoom after the defeat. “A much needed spark in that first quarter and throughout the game.” New York fell down 15-2 halfway through the first, and Jones’ career-high 24 points kept the game from being an embarrassing blowout. On the YES broadcast in the Liberty’s contest against the Fever on August 13, Chris Shearn layered more praise, citing Amanda Zahui B. “Jaz Jones is all over the floor in practice.”

Jones is one of seven rookies — out of the 11 players — that broke camp with New York. Heading into the season, all experts picked them to finish last. After a grade-three ankle sprain pulled first overall pick Sabrina Ionescu from the court, whatever meager expectations fans had for the team fell away. Originally, 16 of New York’s 22 games were set to be televised nationally, but the Liberty have seen its broadcast schedule cut significantly in the wake of Ionescu’s injury. Instead of folding, each compounding challenge has further galvanized this young team.

Many rookies around the league have the luxury of picking their spots on offense, flanked by veterans whose reputations keep defenses honest. Instead, the Liberty often find themselves fielding five first-years at a time, their accumulated court time in the bubble the extent of their professional experience.

Every moment Jones is on the court, she’s making her presence known. “We have a mindset, all the rookies especially — just run down the court, be relentless.” This resilience has been on display with each loose ball, each drive to the hoop. The veterans, outnumbered 7-4, know they can’t lead all by themselves, so they lean on the young players.

In the team’s lone victory, a win over the Washington Mystics back on August 7th, it took a full team effort. “We talk a lot about withstanding runs,” Coach Hopkins said. “The more steady you can stay throughout those — taking a punch, giving one back — you [can] run into a wall. Our bench came in, took a big punch, and didn’t surrender the lead.”

Layshia Clarendon spotlighted a pair of young players that have risen to the challenge, despite all the adversity that has coated this unique season.

“Jocelyn [Willoughby] has stepped up in her defense and style of play. She’s just so tough and we really miss that with Sabrina [out with injury].” Clarendon talked about how Willoughby checked in on their wellness after practice one day, and how much that meant, especially in this bubble season that’s been a strain on every player’s mental health. “She reached out, like, ‘Hey, ‘I know it’s tough, I know I really haven’t necessarily done it at this level like you have…’ just empathizing with me as a leader and what it’s like to carry all that weight on your shoulders.”

Clarendon also named Joyner Holmes, especially on the heels of a talk Coach Hopkins had with the rookies. “Joyner’s talk and communication in practice has been phenomenal. She’s come out of her shell. She’s so funny, hilarious. And she’s really just brought a lot of energy,” Clarendon said, despite inconsistent court time. “I think she showed a lot of energy last night [August 5]. I think she played 49 seconds, and that’s when your character really comes out. People have been playing consistent rotations, and all of sudden she plays 49 seconds, but she doesn’t bat an eye. She still cheers for her team, she’s still talking to us in the locker room after the game, and that to me shows the ultimate leadership and servitude and character in a person.”

“I have a really big voice, I’m very vocal,” Holmes said after a practice, “and it helps a lot of people you don’t even know. I think it just contributes to our success a lot: the rookies are stepping up, we’re talking, and we’re helping the vets as much as they’re helping us.”

About two weeks in, Coach Hopkins sat down with all the rookies, imploring them to step up more. Since then, New York’s improvements have been evident on game day.

“Leadership comes in a lot of different forms,” Coach Hopkins said. “All the rookies have found their own way to lead. It’s a tricky thing to do when you’re a young player, especially on a team that hasn’t had the win/loss success yet. They’ve all carved out their own little niche, in the ways they motivate each other, themselves. It’s pretty fun to watch their growth.”