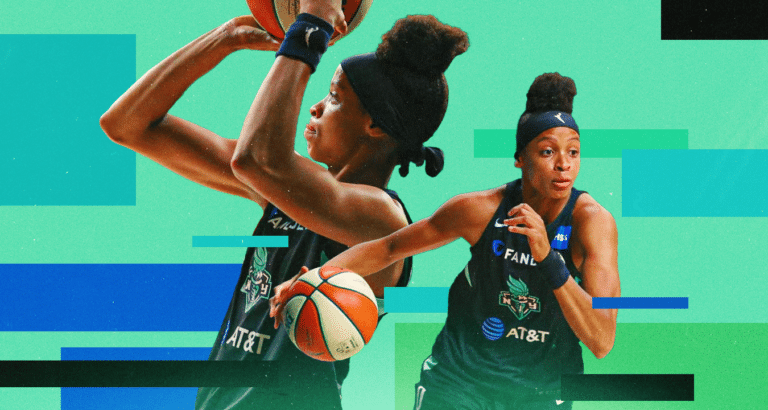 For a split second, it looked like New York Liberty rookie Leaonna Odom had just sent Sunday’s game against the Las Vegas Aces into overtime. With less than a second on the clock, Layshia Clarendon inbounded to a cutting Odom, who hit what appeared to be the game-tying basket:

But the officials started the play clock too early, which meant the Liberty had to re-try to inbounds play, and Odom’s shot — which may or may not have left her hands in 0.5 seconds — didn’t count. Angel McCoughtry leapt up to deflect the second attempt, and the New York Liberty lost.

New York added six rookies in the draft this year — and later added a seventh in free agency — and Odom — a 6’2” forward out of Duke — was the last of those players the team drafted. For that reason, many went into 2020 not expecting much out of Odom. Before the COVID-19 opt outs, Odom was a popular pick online to be a final cut by the team.

But there she was, playing in the closing minutes of a one-possession contest, with the team running a play for her, in just her seventh WNBA game.

So, how’d we get here? One word: energy.

Look, I know you come to film breakdown pieces to read about how players are doing, what they’re doing, etc., but I think it’s important to say one thing that’s not very analytical real quick: Leaonna Odom is really fun to watch.

You see that “fun” quality when it comes to offensive rebounding, so let’s start there.

Though very different in how they play basketball, watching Odom hit the offensive glass reminds me of a player from last year’s team whose energy translated to numerous second-chance looks for the Liberty.

That’s right: let’s take a quick side track to talk about Reshanda Gray.

Gray ended last season third among players to average 10 minutes per game in offensive rebounding percentage. The Liberty missed a lot of shots, but when Gray was on the floor, they were able to grab those misses. The team had a 35.2% offensive rebound rate with Gray on the floor and just a 27.7% rate when she sat.

Teams need players who can crash the boards and create additional opportunities, especially when your team is the only one in the league shooting under 40% this season.

But anyway, this is a film breakdown. Let’s watch some Odom film.

This play against the Mystics is a great example of what I mean when I talk about Odom’s energy:

Odom is out on the left wing for most of this play, including when Kia Nurse fires up the three-pointer. From there, Odom sprints in, leaping to grab the missed shot over two Mystics players. She then dribbles through the muck that is the paint, with the two Mystics draped on her, and manages to get into the restricted area with some clean space around her. She puts up the layup and…misses.

But Odom doesn’t give up on this play. Emma Meesseman comes in to grab the board, but Odom is once again able to deal with the traffic and get herself an offensive board. This time, she puts the ball back up and it lands. Two points, all manufactured by Odom’s energy, by her willingness to fly in there and make things happen.

Odom’s also gotten into a good habit of running in from the wing to grab offensive rebounds:

She’s shown some great recognition for where the ball’s going to go. To make a cross-sport reference, Odom’s like a ball-hawking football safety. She’s not directly covering the players who are in position to grab the defensive board, but when she sense a chance to make a play, she jumps on that chance, gliding in and giving her team another opportunity.

New York takes 28.3 threes per game, the most in the WNBA. They also shoot 28.8 percent on those threes, making them the only team in the league to shoot below 30 percent on threes.

Odom wasn’t expected by analysts to be a huge part of the shooting game in New York. She connected on 37.5 percent of her threes last year at Duke, but she only attempted eight total threes, so that’s a sample size that can be ignored. She was a combined 0-for-4 from three in her first three seasons with the Blue Devils.

But so far, her shooting touch has been fairly good. She’s already taken nine threes, one more than she did all of last year. She’s shooting 44.4 percent, which ranks as the best mark on this team.

Sure, very small sample, and hard to really know if it means much in the grand scheme of things, but so far, it’s worth mentioning that she’s doing a good job at the thing players on this team need to be good at:

Great arc on the shot. Defense gave her a lot of room, and the player closing out had to slow down to account for the possibility of Odom driving.

Ultimately, if Odom can keep connecting on these threes, she’s going to earn more chances on this team. Remember: one thing New York has to figure out this year is who they can keep around for the future. Not every rookie on this team will be around next year, because with a handful of players returning after opt outs and the addition of a lottery pick in 2021, there just won’t be enough spots.

But Odom’s doing a lot right now to stake her claim to the future of this team. She’s turning her energy into production and making a strong case to keep this roster spot long term.