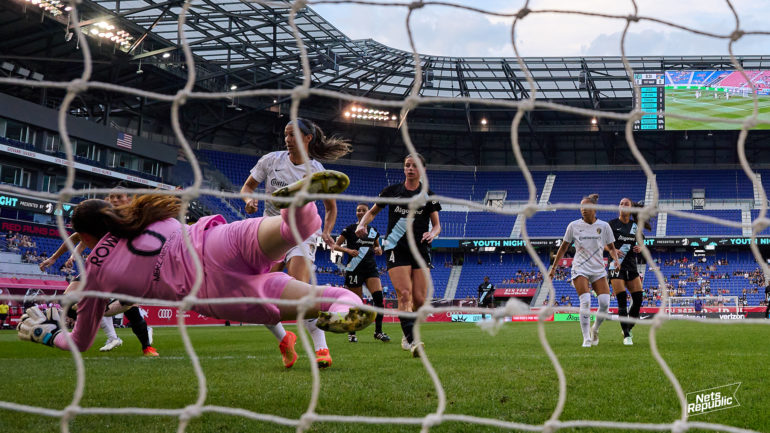 Gotham FC lost Sunday afternoon at Red Bull Arena 0-1, conceding a late goal to the North Carolina Courage. A disappointing loss, the team was looking to snap a seven-game losing streak and gain at least a point from the match, before being dashed by a chance strike in the 81st minute.

The NJ/NY squad was shorthanded entering the rescheduled game. Ashlyn Harris was listed out on a knee injury, and announced on social media that she is recovering from surgery. Jennifer Cudjoe was also out due to a right ankle injury, but gave fans a nice surprise by joining Cloud 9, the team’s independent supporter’s group, by chanting, cheering, and drumming along to support the team from the stands.

Unavailable for the game were Kristie Mewis, Midge Purce, and Ifeoma Onumonu, who were all called to international duty. Mewis and Purce faced off against Onumonu on Saturday, with the former two playing for the U.S. and the latter representing Nigeria, in the teams friendly. The teams will play again Tuesday afternoon in Washington D.C.

On the other end, North Carolina entered the match at 9th in the standings, but well within striking distance of the sixth position. The team was without their starting goalkeeper, Casey Murphy, Irish native Denise O’Sullivan, and Brazilian duo Debinha and Kerolin, all away on international duty for their respective countries. Like Gotham, the Courage looked to gain a win, in hopes of advancing into the postseason.

Victoria Pickett got her first start with the team. Unafraid to take players on, Pickett proved to be a force, both in moving forward and finding dangerous passing lanes to exploit.

Also aiding the team in the first 45 minutes was Imani Dorsey, who in particular had an active first half. The left fullback was very attacking-minded, and even earned an early free kick for Gotham from a shot she took right outside the box. She worked well with Nahomi Kawasumi on the left flank, together working to provide crosses and opportunities on goal for the team.

Both fullbacks continued to provide the team with phenomenal work, both on the offensive and defensive end. Taylor Smith earned her second straight start in the fullback position and did great work taking space and driving forward, providing outlets for the team’s attack.

The defense certainly had a good amount of work to do in the first half. Even without Debinha and Kerolin, the Courage continued to be led by 20-year-old Diana Ordóñez. One of the top goal-scorers in the league and a candidate for Rookie of the Year, Ordóñez proved to be a dangerous threat to Gotham, creating spaces and chances for herself and teammates.

Despite making a few errors, the Gotham defense overall covered each other well and shut down North Carolina’s attack. In the 28th minute of play, Estelle Johnson turned the ball over to Tess Boade, who found Ordóñez in front of the goal alone, before Dorsey swooped in and cleared the ball away.

Boade would also have her own close call in the 39th minute. On a Dorsey give-away, Fuka Nagano slipped the ball in behind to Boade, who took a left footed shot that was just pushed to the side of the bar by Michelle Betos.

Back on the attacking end, the second part of the half was quieter for Gotham. Their best effort would come in the 44th minute, where Dorsey provided an excellent cross, but both Nicole Baxter and Paige Monaghan were unable to make contact with the ball, leaving both teams with a 0-0 scoreline at half.

Gotham came into the second half with renewed intensity. Working the ball from side to side, the team connected through the midfield line to find spaces to attack.

In the 58th minute, Gotham moved the ball from the right flank to the left, looking to exploit Courage’s slow defensive adjustment. Smith found Kawasumi on the left side, who served a beautiful ball to Pickett in the box. Essentially alone running onto goal, Pickett headed the ball towards the net, but had her shot saved by Courage’s goalkeeper, Katelyn Rowland.

Just 10 minutes later, Gotham would have another great look at goal. Creating build-up with Pickett, Dorsey, and Delanie Sheehan on the left, the ball eventually made its way to Kawasumi, who delivered an exceptional cross into the box. McCall Zerboni redirected the ball with a small pass to Monaghan, but the forward was unable to score, taking a right footed shot that was saved well by Rowland.

Monaghan would again get another clear chance at goal in the 77th minute. Getting a cross from Smith, Kawasumi would make the extra pass in the box to leave Monaghan with little resistance in front of goal. Opting to go one touch, Monaghan was not able to keep the ball down, sending it soaring over the goal.

Gotham would come to regret these chances just a few minutes later. A cleared ball in the 81st minute landed at the feet of Fuka Nagano just outside the box. Taking one touch to set-up the shot, the midfielder looked to place the ball in the left corner. A chance deflection off the foot of Freeman sent the ball into the net, allowing the visitors to take the win, and leaving Gotham with yet another heartbreaking loss.

In the post-game press conference, interim head coach Hue Menzies said the team played well but that ultimately it all comes down to finishing. “We had our chances up top…but we have to keep trying.”

The team has been putting in the work, and Monaghan in particular, Menzies noted, had an especially good week of practice. Understanding the sport is very much a mental one just as much (or even more than) a physical one, Menzies emphasized the need to support the players. “I give the girls credit…Paige [Monaghan] had a couple chances and she normally puts those away…” he noted before adding, “We just got to pick her up and keep her going.”

Afterwards, Monaghan expressed her own disappointment in being unable to finish her chances. Despite frustration over the result and these missed opportunities, Monaghan relayed a need to stay persistent. “I take full responsibility for [missed shots]…but I’m reminding myself that I got into good positions tonight, the team got ourselves in better positions tonight. We just have to get through this and embrace the suck, for lack of a better word.”

After losing this match, Gotham’s playoff chances are incredibly low. Needing to win the rest of their matches, fix their goal difference number, and rely on other teams losing their games (among other factors), the possibilities are very dismal.

Interestingly enough, Gotham FC General Manager Yael Averbuch West took to Twitter to explain the club’s overall commitment to becoming better for the future. Averbuch West has spoken before about wanting to create a winning mentality for the club, but it seems this vision will have to wait a little bit longer before beginning to develop.

Gotham FC’s next game is at home this Sunday, September 11th in Red Bull Arena versus Kansas City Current. The game is set to kick-off at 6pm ET and will be broadcast on CBS Sports Network.