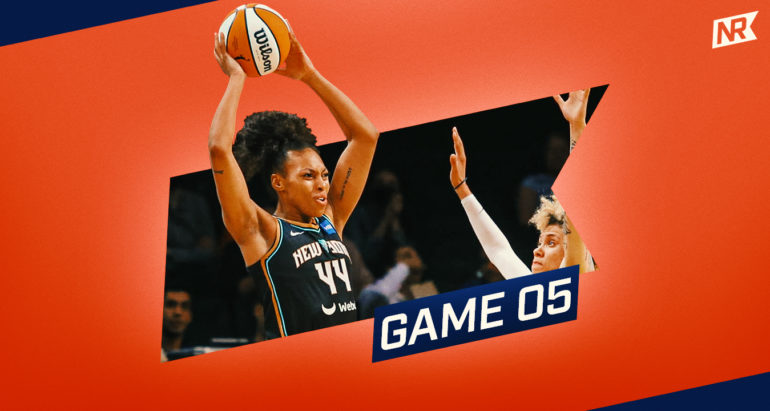 At the beginning of the game, YES Network commentator Julianne Viani-Braen highlighted the importance of taking care of the ball against the Connecticut Sun defense. Less than a second later, Sabrina Ionescu was called for a backcourt violation due to slight ball pressure. It was the type of mistake that Ionescu normally doesn’t make and foreshadowed the devastating night to come. A few possessions later, Stefanie Dolson was called for a travel violation after lifting her pivot foot, which was then followed up with another travel by Rebecca Allen.

#2 – Bottle Up The Opening Minutes

One of the common problems previously discussed in this recap series was the Libs’ issue with slow starts. For the second consecutive game, this wasn’t a concern as New York raced out to a 10-2 lead. One reason why the Liberty were able to overcome the early turnovers was their own defensive pressure. The Sun were 0-for-7 from the field and didn’t hit their first field goal until Alyssa Thomas scored with just under six minutes left. When Connecticut was able to manufacture a good look, they couldn’t finish, missing several easy layups. At one point, the Sun were shooting 3-for-13, providing the Libs leeway for their seven turnovers.

At the beginning of the second quarter, the turnovers finally got inside the heads of the Liberty players. With New York still reeling from a pair of back-to-back giveaways (one off an inbound, and the other from a lazy pass after they crossed half-court), Betnijah Laney was on the left sideline ready to inbound the ball. After a clear-out from Natasha Howard, Ionescu cut outside to receive the ball. Laney didn’t trust the passing lane and was called for a five-second violation. On the very next possession, Laney was stripped off the ball as she attempted to get into a halfcourt set. This was one of several jarring sequences that exemplified how the Liberty were second guessing themselves.

In a disappointing start to the season, the Liberty’s lone redeeming silver lining was their gusty performance in a season opening 81-79 win against the Connecticut Sun. Unfortunately, it has become increasingly difficult to continue to use that example as a reason for hope. The Sun were deeper last night with the return of DeWanna Bonner and Courtney Williams. The former was brilliant in her season debut, finishing with 16 points, three assists, and five steals. Her length and versatility was game-changing, further proving she has no intent of slowing down in her thirteenth season.

There’s precedent for teams overcoming worse starts to their season and the Liberty are capable of being the next team to recover, but there are also telltale signs that it’ll be a steep hill to climb. The Libs threatened the WNBA record for most turnovers in a game held by the 1997 Utah Starzz. That team ended up finishing the season with a 7-21 record. There’s also an obvious chemistry issue that the team needs to work out. Part of that isn’t anyone’s fault and can be blamed on the team’s revolving door of injuries and the remaining roster adapting to a new system. Unfortunately, chemistry isn’t something that can be improved by watching film and typically takes more time. Once the Liberty are where they need to be, they’ll have no choice but to play near-perfect basketball if the goal is still home court advantage in the first round of the playoffs.

2 – DeWanna Bonner (Big fan of her game, causes havoc on both ends, so smooth with the ball)

3 – Alyssa Thomas (Didn’t have to shoulder [almost made it through a piece without mentioning AT’s shoulders, sorry!] the load like in her first matchup against the Libs, but was still great on both ends)

The Liberty have now lost the free-throw battle in all five of their games this season. What is more concerning is that it seems to be getting worse with each passing night. New York is now a minus-38 in the free-throw department and are averaging nine fewer free throws than their opponent in their last three contests. With the team’s offense struggling, it’s important that New York gets to the free-throw line for easy points and to put opposing players in foul trouble.