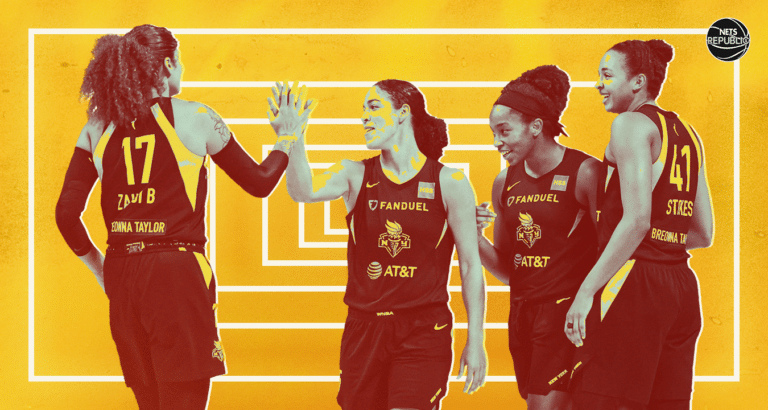 Breaking Down the New York Liberty 2020 and Beyond

This Liberty season has been really interesting because the team was in the “Wubble” due to the COVID-19 pandemic, and they were a very young team. I spoke with Jackie Powell of The Next about the Liberty’s 2020 season, their challenges, and their future. Here are her takes.

Q. Which Liberty player has impressed you the most and why?

A. I think I have a couple who really have impressed me… When it comes to a surprise, I would say, “The Lou York City” bunch. And, who that means is Jazmine Jones and Kylee Shook. Because they are two rookies who people had no idea would be picked as high as they were on the draft board. . . Those two have really proven themselves on both sides of the floor. I think for Kylee, why she may not stand out as much on offense as Jaz is because there’s really a learning curve in the post for young (post) players. What impresses me about Kylee is her ability on defense. She’s probably the best post defender on that team, and she’s a . . . ROOKIE! She is so intelligent, and it’s hard to notice, her awareness for the game on both sides and her value that she places on defense, that was not where the Liberty was in 2019, so that’s why I think she’s super special. We see her (Jaz’s) energy, and we see she’s a shot creator.

Q. How have you seen the Liberty come together as a team even with a shortened training camp and a lot of rookies?

A. Like AZB (Amanda Zahui B.) said (in a press conference), collectively they care about each other as people and I think that really helps. You have someone like Jocelyn Willoughby who is baking for her teammates every week. You have those types of hearty people and it helps them get through their growing pains. This team doesn’t give up. There’s so much at stake for all of them. They value each other, and they value bringing this organization back.

Q. What are the Liberty missing most with Sabrina being out?

A. It’s a lot as you’d expect. I remember being on the zoom after that game. Walt (Hopkins) shows his emotions on his sleeve, and he was so sad. She’s a consistent scoring threat. That’s what we saw in all of her games. Like, in the Dallas game where she completely took over. Sabrina is confident from the perimeter and a scoring threat . . . So, they’re just missing (Ionescu’s) intensity.

Q. Unfortunately, the Liberty did not make the playoffs, so which players do you think would be good for the team through the draft and/or free agency?

A. There’s a lot of uncertainty, and we do not know what will happen with college ball and the draft is a very gray area. They have a lot of cap space and a lot of pieces for trades. They could trade the draft pick for a veteran in the post. I think 3 people could make an interesting fit . . . This one is maybe a pipe dream, is Liz Cambage–I know that sounds wild. You’d be creating the Sue Bird/Lauren Jackson dynamic, but in Brooklyn. Because Liz is someone who may retire after Tokyo, so she’s a bit uncertain. The other two are more realistic. First, trading for Myisha Hines-Allen of the Mystics. She’s a very good fit for many reasons. Versatility. She has a 3 point shot. She can battle on the offensive glass. She’s the type of person the Liberty are looking for personality and chemistry-wise. That could mean four players from Louisville. Second, Astou Ndour, who I think has the skill set the Liberty really want in a post player. She’s got the size, she’s 6’5”, and can shoot the three. They are a staff of player developers, so they could get a player to respond after a down season. New York Liberty Coach Shelley Patterson can fine tune someone’s shot. Why I say the post, is I think that is an area of struggle . . . Have to remember Han Xu is still a piece. She is 6’9” and can shoot from three. How is someone going to contest her?

Q. What can Liberty fans look forward to next season?

A. There is so much! I encourage (Liberty fans) to not look at the record. A bunch of the rookies, including Leaonna “Neah” Odom and her vertical game, have so much promise and potential. And the international players, who are so exciting, like Rebecca Allen, her skill set is exactly what the Liberty need to be successful. She can shoot the daylights out of the ball. In addition to learning the system, it’s a group that isn’t used to where the 3 point line is, and you have 6 rookies and the 3 point line changes. The rookies are getting used to how to shoot from the 3 in the WNBA. JW (Jocelyn Willoughby) shot very well from three in UVA, and taking the long 2’s, maybe that’s because she’s trying to get used to where the 3 point line is. RA (Rebecca Allen) has been in the league for a while and not used as much as she could have been, in the first 3 seasons. They need that consistency, having RA (Rebecca Allen), and Marine Johannes back, who had 2 perfect games in 2019. There’s so much talent and also Barclay’s center. Hopefully, the Liberty can make their well-earned debut at Barclays. Sabrina, having a healthy Sabrina Ionescu who’s able to recover between practices and doesn’t have to play every other day. Young talent, a coaching staff with player development chops to develop young talent. MJ (Marine Johannes), she is a walking highlight reel–when you think of NY you want someone who is going to grab people’s attention. This is sort of an audition, who is going to get the spots in Brooklyn next year. That is how they are approaching this. One of the most interesting arenas and venues in the league in Barclays Center and the international pizazz that the Liberty can have (Sweden, Canada, France, Australia, etc,) they are a United Nations. If that doesn’t scream excitement, I don’t know what does.