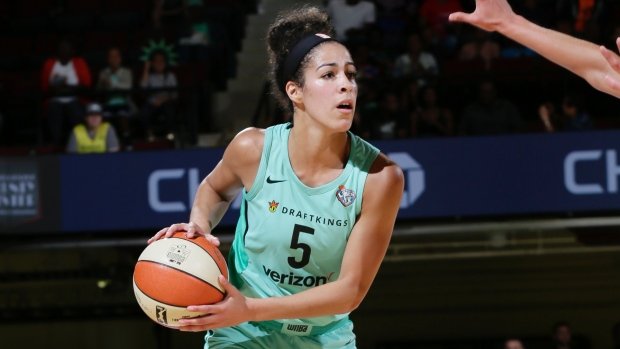 The start of New York Liberty training camp is just around the corner, which means the team has officially unveiled its 2019 training camp roster. The team has invited 20 players to camp; 12 will make the final roster. 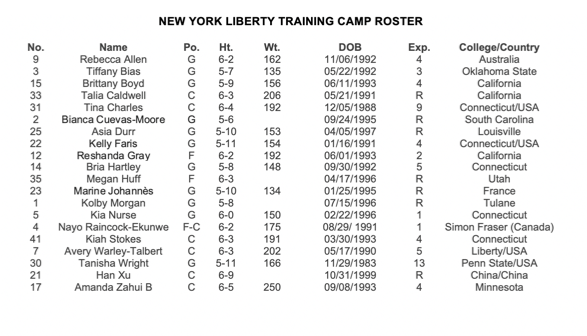 So, out of these 20 players, which ones will make the roster? Who’ll be left out? Let’s look at the histories of these players and their fit with the current team and try to parse through this question.

The “Definitely Making The Roster No Matter What” Players

While there have been some concerns about Charles after the team cored her but then never announced a long term contract with her, having her on the training camp roster seems to imply that the team and Charles figured something out. Charles is New York’s best player, the heart and soul of this team, and likely the team’s only All-Star this season unless Asia Durr develops quickly.

Durr was drafted to be this team’s best perimeter option on the offensive end. I’ve already written a lot about Durr, so you can check that out here, but to save us some time: Yes, the number-two pick in this year’s WNBA Draft will be a New York Liberty this year.

While Zahui is missing part of training camp due to still being over in Europe, she’s set to be this team’s starting center when the regular season kicks off. Last year, Zahui rated well in spot ups and as the roller in pick and rolls, but she wasn’t quite as efficient in post ups, scoring in just the 53rd percentile on them. Synergy also ranks her as one of the league’s worst defenders, allowing a points per possession total that ranked in just the seventh percentile. While that’s an obvious spot that needs improved, Zahui’s ability to extend her game to the perimeter gives the Liberty some versatility and after watching her play some solid games over in Europe this year, I’m feeling good about her season.

Nurse had a bit of an uneven rookie campaign. She started the year off with four consecutive games of double-digit points, including a 34-point outing against the Indiana Fever on June 2nd, but the middle of the season was rough and included a 10-game stretch where Nurse didn’t score more than nine points. But she came on strong again near the end of the year and put up 28 points and seven rebounds in the final game of the year. Nurse’s shooting was one of her big issues as a rookie; she took 48.8% of her shot attempts from three, but connected on just 29.4% of them. She’s going to be a starter on this team, but she has to hit those shots at a more efficient rate if she’s going to continue taking as many as she did.

There’s an asterisk by Xu’s name because there’s still been questions about her overseas commitments with the Chinese national team, but this team’s didn’t draft Xu to not have her on this roster. While it’s true that second round picks can’t just expect to make a team’s final roster in a league where there are only 144 spots available, Xu has first round talent and the Liberty have to find a spot for her if she wants to play in the league this year.

The five players above are the ones that most feel like locks to make the team, but the second tier of Liberty players still has some solid names that I’m somewhere between 90 and 99 percent sure will be taking the floor once the regular season kicks off.

Boyd was re-signed this offseason, so the idea of her missing the final roster feels like a longshot, but I just don’t see her in the same tier as the team’s top players. Nothing against Boyd, who’s a great role player for this team, but veteran guard Tanisha Wright’s addition adds competition for backup guard minutes, and if Wright shoots the deep ball as well as she did last year, I can see her getting more run than Boyd.

As touched on in the Brittany Boyd section, Wright’s shooting is what can earn her major minutes, but her shooting has historically been pretty up and down. Last year, she shot 39.6% from deep. The year before, 23.5%. The year before that, 36.4%. Back in 2010, she took more threes than she ever had before and topped 40% shooting on them for the only time in her career. Two years later, she was 10-for-52 from three. What three-point shooting version of Wright will we get this year?

This team has so many guards! Hartley’s capable of taking a large volume of perimeter shots and converting them at an okay rate, and she averaged a career-high in assists last year.

Stokes is an effective backup center who plays well defensively, and while she’s not as efficient offensively as you might like, she’ll give the team effective minutes.

I’m putting Allen here since she’s a returning member of last year’s roster, but the asterisk stands for “if someone here doesn’t make it, this is who I’d expect it to be.” Allen probably makes the final roster, but she was last on this team in minutes per game last season and hit just 26.3% of her 1.4 threes per night. With so many guards on this team, I would not be shocked to see Allen not make it out of training camp.

So, the 10 players above are ones that I’m pretty certain we’ll see on this New York Liberty roster (or, at least, the nine of them who aren’t Rebecca Allen are), but that leaves two spots still. Those could be filled by the team re-signing one or two of the three players from last year’s team who are currently free agents — Epiphanny Prince, Marissa Coleman, and Kia Vaughn — or they could bring back all three and push someone from the above tier out. They could also just let all three walk and use those final two roster spots on someone else from the training camp roster. More than likely, though, decisions about Prince and Vaughn would come later in the Summer after they’re back in the country, but it’s worth noting that neither player has gone unsigned this late before, so it could be a sign that they’ll be looking for new teams once they’re back.

Let’s briefly look, in alphabetical order, at the 10 other players on this training camp roster:

Bias has been out of the league since 2016, and she was waived by the Wings before the 2017 season. Her WNBA career never took off, but in college she was a good passer and defender.

Caldwell graduated from Cal back in 2013 and has spent her time playing overseas. She’s never appeared in a WNBA game and while it’d be a great story to see her make this roster, she’s got to be considered one of the longer long shots.

Cuevas-Moore went undrafted this year and while she possesses some good traits, including the ability to swipe away steals, I just don’t see room for another guard on this final roster.

Faris is a veteran who hasn’t been in the league since 2016. A well-rounded player at UConn, Faris’ WNBA career never took off, and while she’s had some strong production for various overseas teams, the battle for a roster spot in New York feels a little too tight for Faris to make the club.

The Liberty have a lot of players on this training camp roster who’ve been out of the league for a little while, but Gray might be one of the best of those. Put up some good scoring and rebounding numbers when she has been in the league.

If the Liberty want to go younger, this year’s third round pick, Megan Huff, showed a lot of promise at Utah and would provide the team a solid interior option, a good thing when so much of the current roster is built around guards. She also helps a team that needs an infusion of youth.

I know some people who are really high on Johannes, and while Liberty head coach Katie Smith has said that Johannes will likely stay overseas during the season, that hasn’t stopped there from being a lot of hype about her. After watching video of her, I’m also excited:

Johannes has the ability to shoot from long range off the dribble, which is something this Liberty team could really use. She’s got a great eye for making passes. I’d really love to see her as the sixth man on this team, but I understand the roster numbers are tough and all of that, but Johannes is just so fun to watch.

A good scorer for Tulane who is back for her second year in a row in New York Liberty training camp but, again, is a guard fighting for a spot on a guard-heavy team.

Played 32 games for the Liberty back in 2017, starting two of them, and averaged 3.7 points and 1.8 rebounds on 52.6% shooting. Has the advantage of having been a starter for the Liberty in recent history. Was the Defensive Player of the Year in the Swiss LNA in 2014. Could be useful as the last big off the bench.

A veteran who first played in the league in 2012 and last in 2016, she did start 23 games for the Liberty back in 2014. Solid player, but I think I give Raincock-Ekunwe the edge for the final roster spot.

If I had to pick two of these players, I think I’d go Huff and Raincock-Ekunwe, and if Johannes does end up over here this year instead of back in Europe, I’d put her on the roster over Allen.

How correct will these guesses be? We’ll see, as New York Liberty training camp and the preseason are just days away.